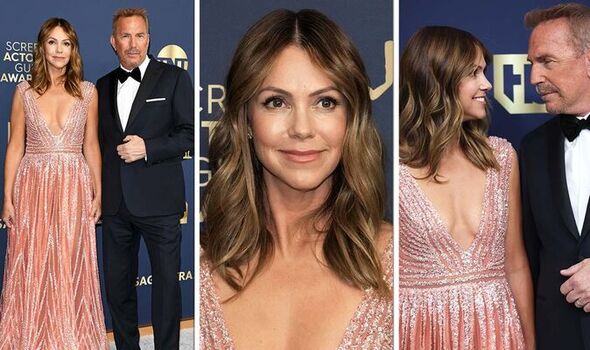 Kevin Costner and his wife Christine Baumgartner stunned fans when they walked the red carpet at the 2022 SAG Awards in February. Kevin looked dapper in a black suit with matching bowtie and Christine dazzled in a low-cut pink dress which was embellished with sequins from head-to-toe.

Christine cheered her husband at the ceremony as his drama series, Yellowstone, was nominated for best ensemble.

Kevin also has children from previous relationships including son Liam, 26, from his romance with Bridget Rooney and three more: Annie, 37, Lily, 35 and Joe, 34, from his first marriage with Cindy Silva.

The Bodyguard star originally met Christine in the 1980s when she was modelling and Kevin was still married to Cindy.

Romance began in 1999 when the pair ran into each other in a restaurant. Following a brief split in 2003, the couple tied the knot in Aspen, Colorado, in 2004.

Still going strong almost two decades later, Kevin gave a rare insight into their marriage and how the Covid pandemic had made them even stronger. Speaking to People in 2020, the Robin Hood actor said: “Our partnership has really come into focus about what we do for each other and how we deal with our family.

“Our house is like a river: You’ve just got to get into the flow of it. And whatever you thought it was going to be, maybe it still can, but it’s going to have to work with what the day brings.”

Kevin and Christine walked the red carpet at the 2022 SAG Awards.

Romance began in 1999 when Kevin and Christine ran into each other in a restaurant.

Kevin and Christine have been married for almost 20 years.

The couple wed in 2004 at their ranch in Aspen, Colorado.

Kevin, Christine and their children.

Kevin with Christine and his children from his first marriage: Annie, 37, Lily, 35 and Joe, 34.

Everyone Taylor Swift Acknowledged In Her Grammys Acceptance Speech