Gabrielle Union took to Instagram to share an adorable new video of her two-year-old daughter Kaavia James cheekily putting a small piece of paper over her mouth while playing outside.

Gabrielle Union, 48, shared another epic moment with her daughter Kaavia James, 2, on Instagram on June 4. The doting mom was laying in the grass outside while the tot sat on top of her and kept putting what appeared to be a small piece of paper over her mouth. They conversed a bit while the hilarious little girl said, “You stink” while leaning over and then pulling away, causing the actress to laugh.

“I can’t talk,” Gabrielle continued to joke as Kaavia kept putting the paper over her mouth. They eventually both laughed together as the latter screamed and got up off her mom and onto the grass. She wore tan dress with Minnie Mouse faces all over it as her loving parent wore a blue tie-dye long-sleeved top and matching pants.

“I. Can’t. With. This. Girl. 😂😂😂😂😂😂#YuckMouth #ShadyBaby @kaaviajames,” Gabrielle captioned the post, which was met with a lot of comments from followers. “definitely shady lol,” one follower wrote while another suggested they “make a cartoon.” A third called Kaavia “so cute” and a fourth shared, “I love this kid.” 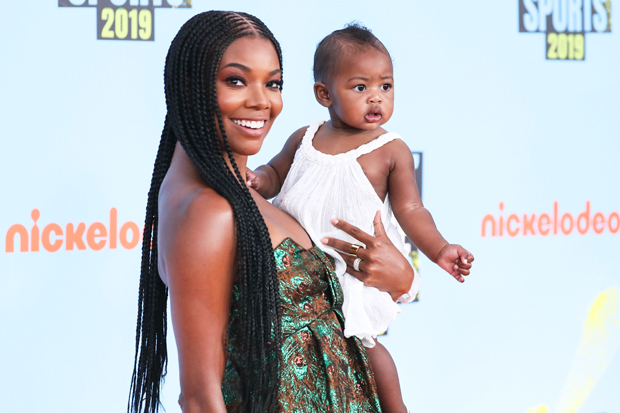 This isn’t the first time Gabrielle has showed off a video of Kaavia being a “shady baby.” The beauty loves to post memorable posts of her mini-me being as funny as can be with her big personality. Back in Apr., Kaavia chased after her mom while driving a white toy car and trying to avoid nap time. She even ran over Gabrielle’s foot as she confidently steered her way around a pool area and didn’t hesitate for one second!

“Oh, you just ran mommy over! You just going to run me over?” Gabrielle asked while laughing at the courageous act.

When Kaavia, whose dad is Dwyane Wade, 39, is not running people’s feet over with her toy car, she’s flaunting her skills at sports. The cutie pie recently took part in soccer practice in a clip Gabrielle shared to social media. After an encouraging talk, the small gal energetically ran on the field around other friends and proved she has a knack for chasing after a ball. “I might’ve shed some thug tears 😭 😭😭😭1st soccer practice in the books!! ⚽️🏟⚽️,” Gabrielle captioned the clip.

Sofia Wylie Dances Her Heart Out in First Episode Of Her New Webseries ‘Shook’ – Watch Now!