Throughout their careers in animation, directors Max Lang and Daniel Snaddon have maintained a strong collaborative relationship with children’s book author Julia Donaldson. After bringing four of her works to the screen—two of which garnered Oscar nominations—they return to the awards conversation this year with The Snail and the Whale, adapting a book written by Donaldson and illustrated by Axel Scheffler, which Lang had long been eyeing.

Featuring the voices of Sally Hawkins, Rob Byrdon, and the late Dame Diana Rigg, who serves as narrator, Magic Light Pictures’ animated short tells the story of a snail that strikes up an unlikely friendship with a humpback whale, situating herself on his tail and joining him on a once-in-a-lifetime adventure. 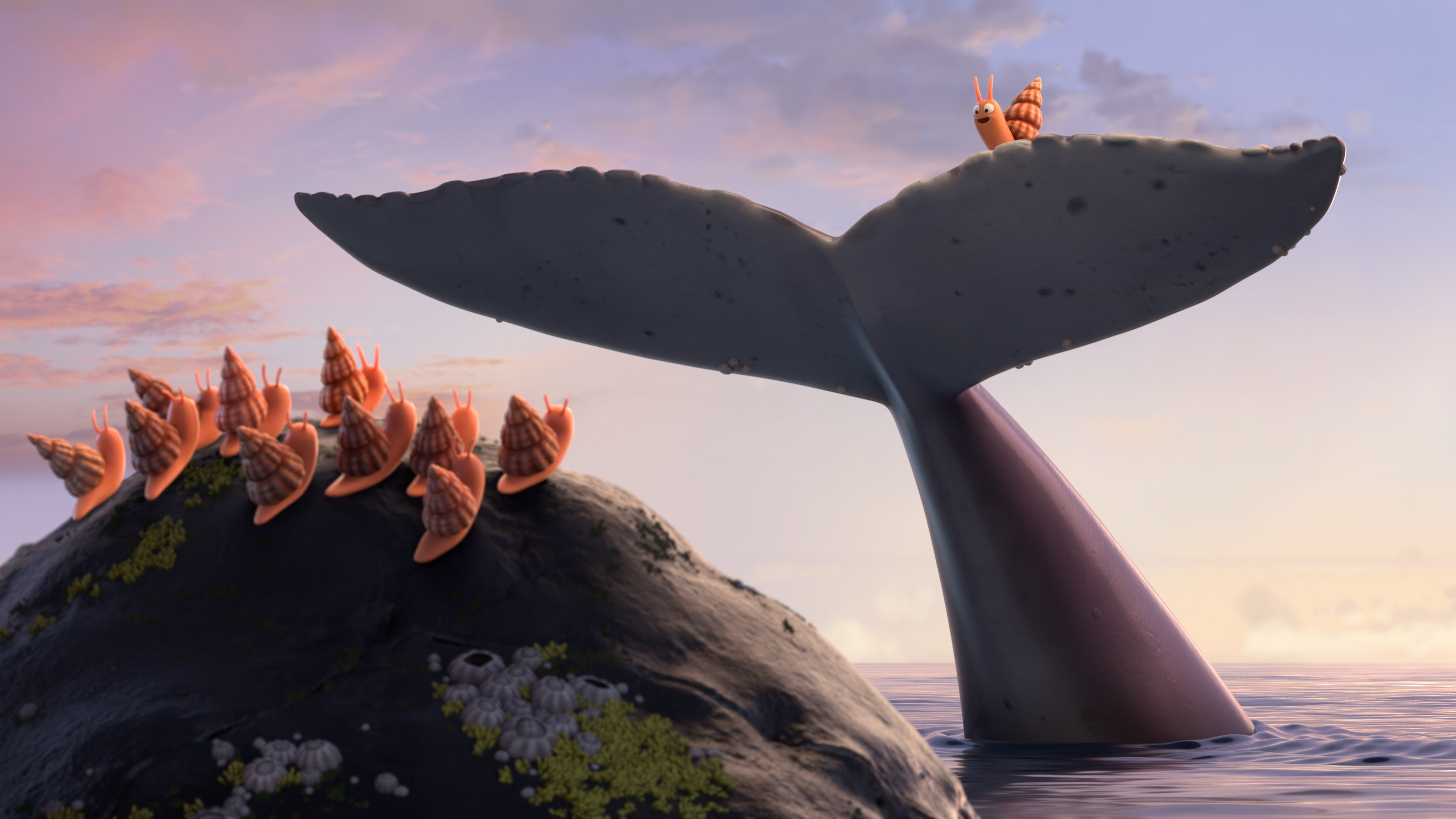 While each Donaldson adaptation has presented its own singular tone and world, and come with its set of challenges, The Snail and the Whale was by far the most challenging that the directors had ever taken on, calling for extensive water work and a range of eye-catching environments. “A lot of people, including us, were really worried when we were taking it on, and it was always like, ‘Can we actually do this? Everything says we can’t do it.’ Like, all our experience, from the last 10 years of making these films,” Lang admits. “But because we had such a magnificent team, it ended up being the most pleasant and easiest experience, ultimately. It was really challenging, but everyone did such an amazing job that I’ve never had an easier time, as a director.”

Below, Lang and Snaddon break down other challenges in storytelling that they had to overcome, in order to bring the film to fruition, touching also on its “beautiful,” environmental message and their collaboration with Rigg.

DEADLINE: How did you come to adapt The Snail and the Whale? And what excited you about doing so?

MAX LANG: Since we were making The Gruffalo in 2008, I’d been dreaming about making it into a short, but we couldn’t figure out how because it’s technically very challenging, but also, the story adaptation was very challenging. These characters are so different in scale, so you can hardly fit them in the same frame. They don’t really talk too much to each other, and they don’t have hands or body language that you can use too much. So, that was another thing, next to the technical challenges. Figuring out how we can build the relationship between them took a while to figure out.

DEADLINE: What about this particular story resonated with you? 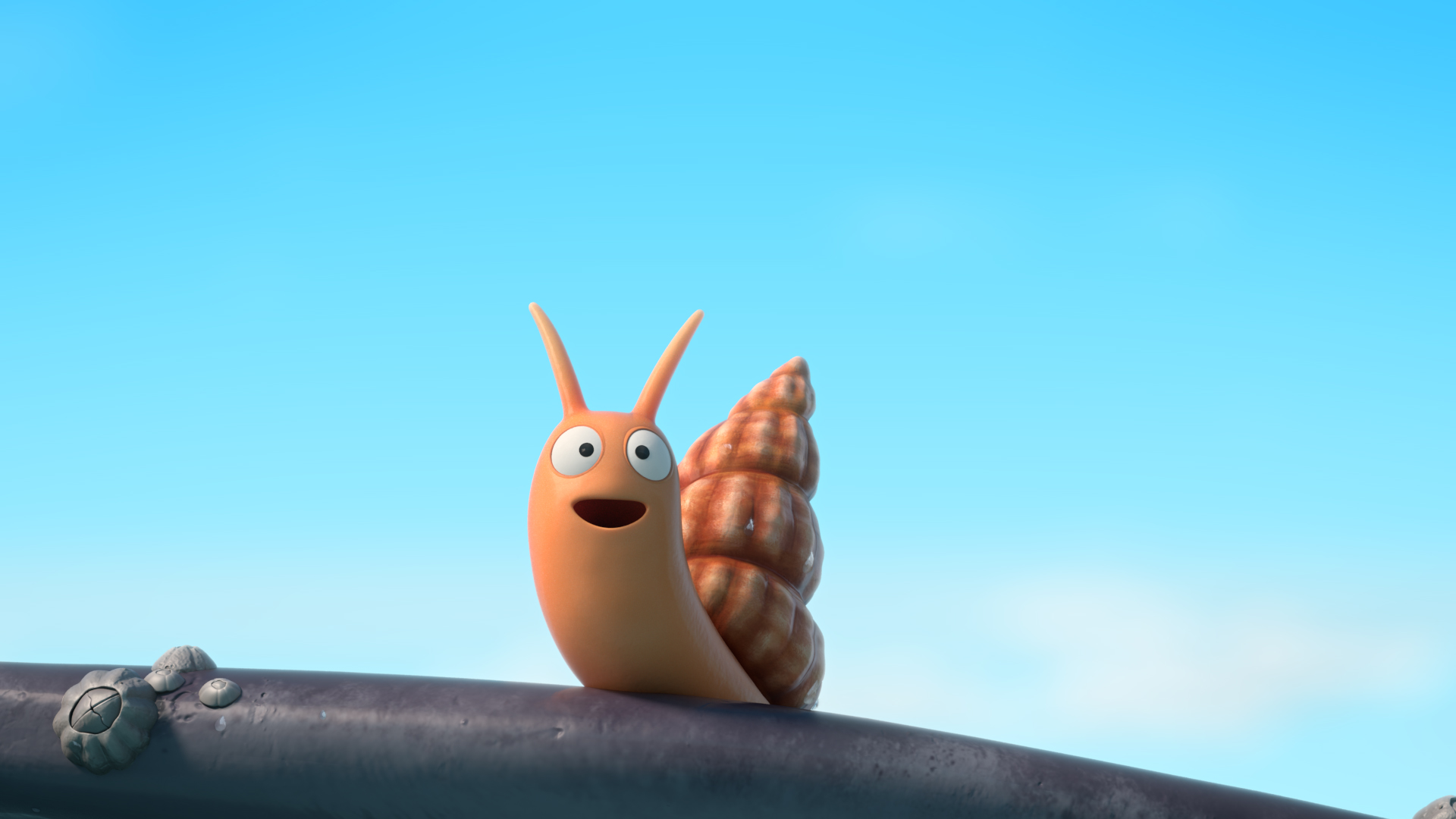 LANG: I do thing it’s one of the best picture books out there. Like, I genuinely love it. I love the language, but also the theme is just so beautiful. It has this environmental message that is not too strong or too negative. It’s just really positive and encouraging, and it’s so relatable—this little snail who goes out and wants to see the world, and gets overwhelmed. The more she knows, the more she realizes how tiny she is, and how overwhelming it all is, and it’s so much about that. You celebrate the beauty of our planet, and how vast it is, and how overwhelming that can be, but then it really turns it around nicely, where it’s like you can still make a difference. No matter how small you are, you can make a difference for the people that you love, for your community, and it has all of that. It’s a classic tale, really. She goes on this journey, she has her experience, she comes back and changes the whole community.

DEADLINE: Walk us through your conversations, in the early stages of visual development. Did you first have to grapple with the difference in scale between your two characters?

DANIEL SNADDON: It definitely was one of the first things we were talking about, and because our aesthetic is really inspired by stop-motion, we always approach these problems from the same perspective. [Like], “If we had to do this in stop-motion, what would we do?” So, a lot of the sets that the snail occupies are built and dressed for specific shots, because that’s exactly what you’d do if you built in stop-motion. I think we took a very layered approach to that and tried to find a balance, all the way from design through the different stages of building each shot. How much detail is too much? And how do you get that really satisfying sense of a miniature world, and then also really hit these big, wide, epic shots? We were very lucky with our team, that they completely got that—how essential that contrast between the enormous world and the beautiful, little micro world was to telling the story.

LANG: From a storytelling point of view, we ultimately realized that you could establish a really nice connection between [the characters], if they would just look at each other, of if you just had the feeling that they would look at each other. Technically, if you think about it, they can’t physically look at each other. [Laughs] But just using screen direction really helped. You felt like they were reacting to one another.

Then, also, adding certain actions where you could really feel that they care for each other made a huge difference. So, most of the time, the snail is on the tail. But whenever she comes off, it really means something. If she gets thrown off in the storm and the whale goes to save her, or when they look at the stars together, I feel like just by changing the location, it already gives the scene a lot of meaning. 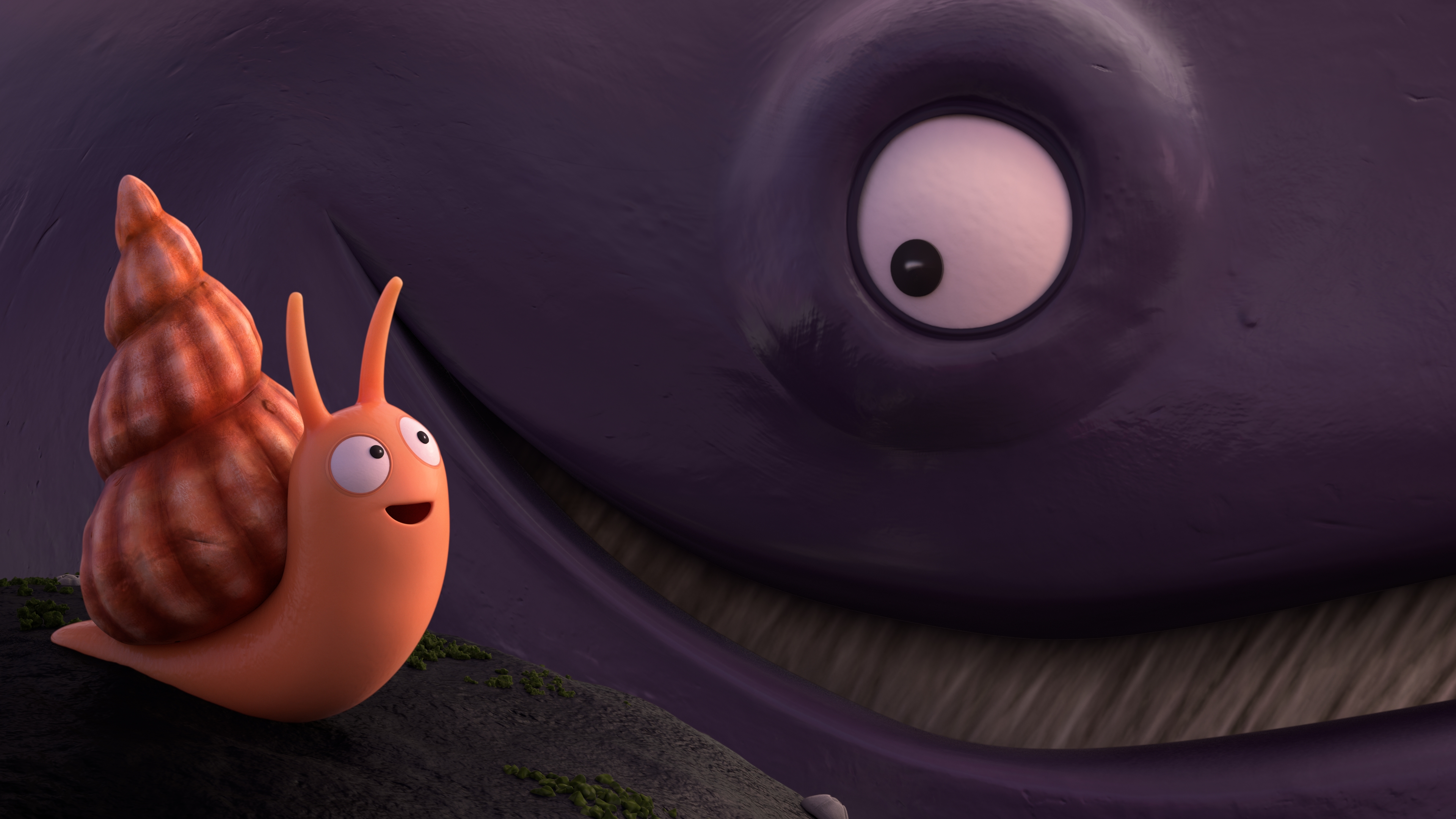 SNADDON: Yeah. I love the moment where she’s trying to push [the whale] back into the sea, and her head is completely flat against him. It sort of says it all, really.

DEADLINE: Did you need to study the movement of both whales and snails in prep?

SNADDON: Definitely. The animation team threw themselves into a lot of research, and actually built [a] snail rig. Like, when she slithers over any kind of surface, she sticks to it and deforms. They really took a lot of pride in preparing for the film, and one of the things we were conscious of is how all those different elements sell that idea of scale.

So, a whale moves its mouth, for example. In animation, we love moving things around. We love creating lots of contrast and nice, snappy actions. But if you do that with our whale, it would feel like the water would just be splashing around it, every time he says anything. So, we had to really think a bit more, in terms of real-world physics and all that kind of stuff, to really get that sense of [contrast in scale]. There’s beautiful stuff out there, and every member of the team did a lot of research, from lighting, to comp, to surfacing. And to explore those different environments—how whales look underwater, above the water—we really had to school ourselves.

LANG: You’re picking up on something interesting, actually. We did not want the whale, especially, to start acting with his flippers, or become too human. Rather, we did a lot of research and tried to find expressions of his emotions that still feel very naturalistic to how a whale really moves.

SNADDON: Yeah. There’s some lovely stuff on YouTube of people saving whales, and the whales sort of jumping for joy, and you really get that sense of connection, without having to anthropomorphize them too much.

DEADLINE: What kind of pipeline did you use to bring the film to life? 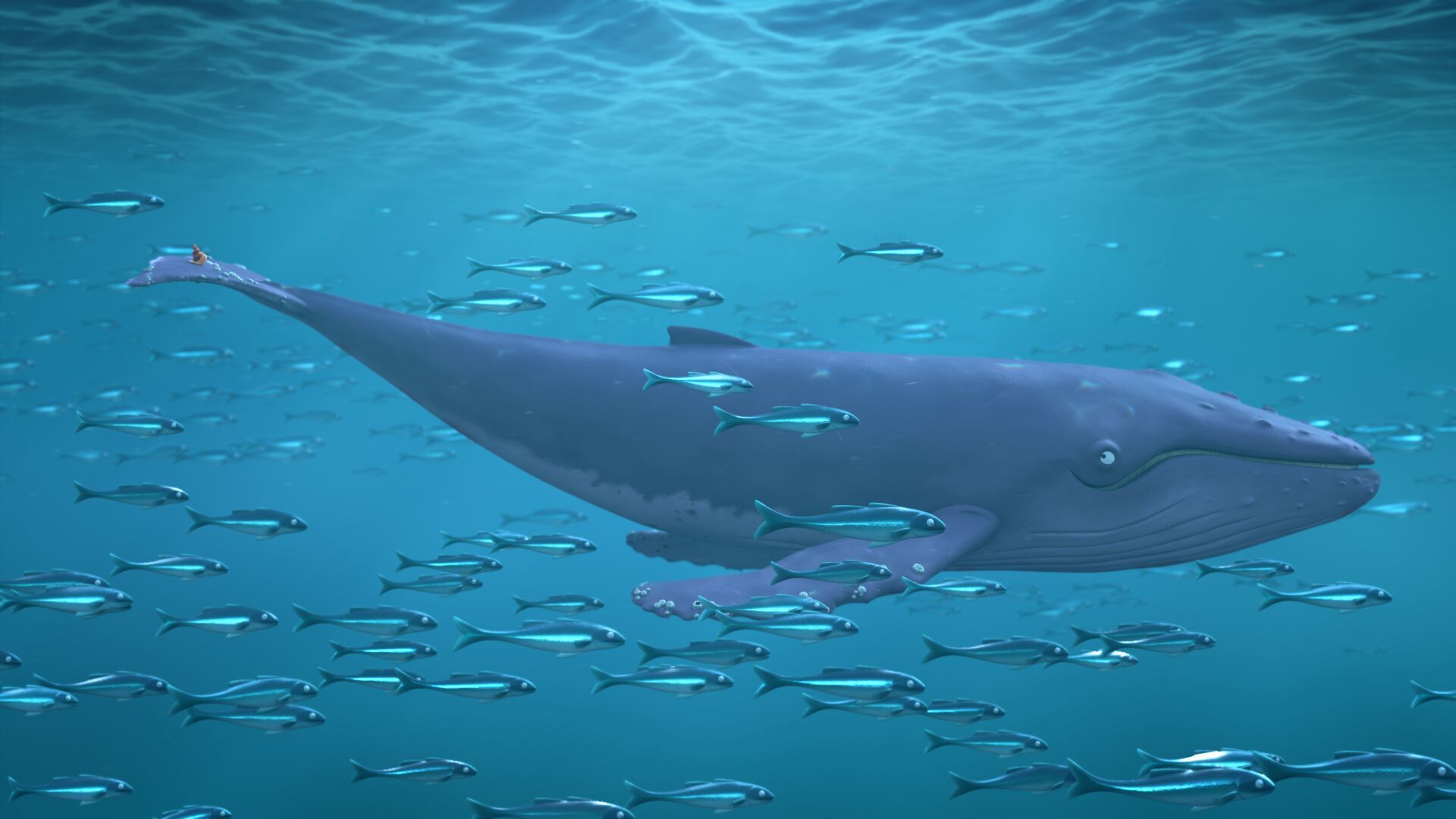 SNADDON: It’s a CG pipeline that had to expand, compared to our previous films. We introduced Houdini into the pipeline, which really saved our bacon, in terms of the massive amount of effects in the movie. I think there’s easily five, six, seven times as many effects shots as there was on our last film. We were using Maya for the animation, using Arnold to render, and we had quite a new VFX team that we assembled to help us build the pipeline. That was a big part of the challenge, was just putting a new team together, trying to work in a style that’s well established, and then add this whole extra layer of water in VFX.

DEADLINE: What other unique challenges did this short present, in comparison to your previous Julia Donaldson adaptations?

LANG: I would say it’s definitely the most poetic one of all the films, and I feel like Zog, the film we did last, was on a completely other spectrum. It was more entertainment and fun and comedy, and in this one, we were really embracing that we can take some time to enjoy this landscape, and really take a clue from nature documentaries. It’s like, “No, we don’t need to fill up everything with plot. The world itself and experiencing it is part of the story.” 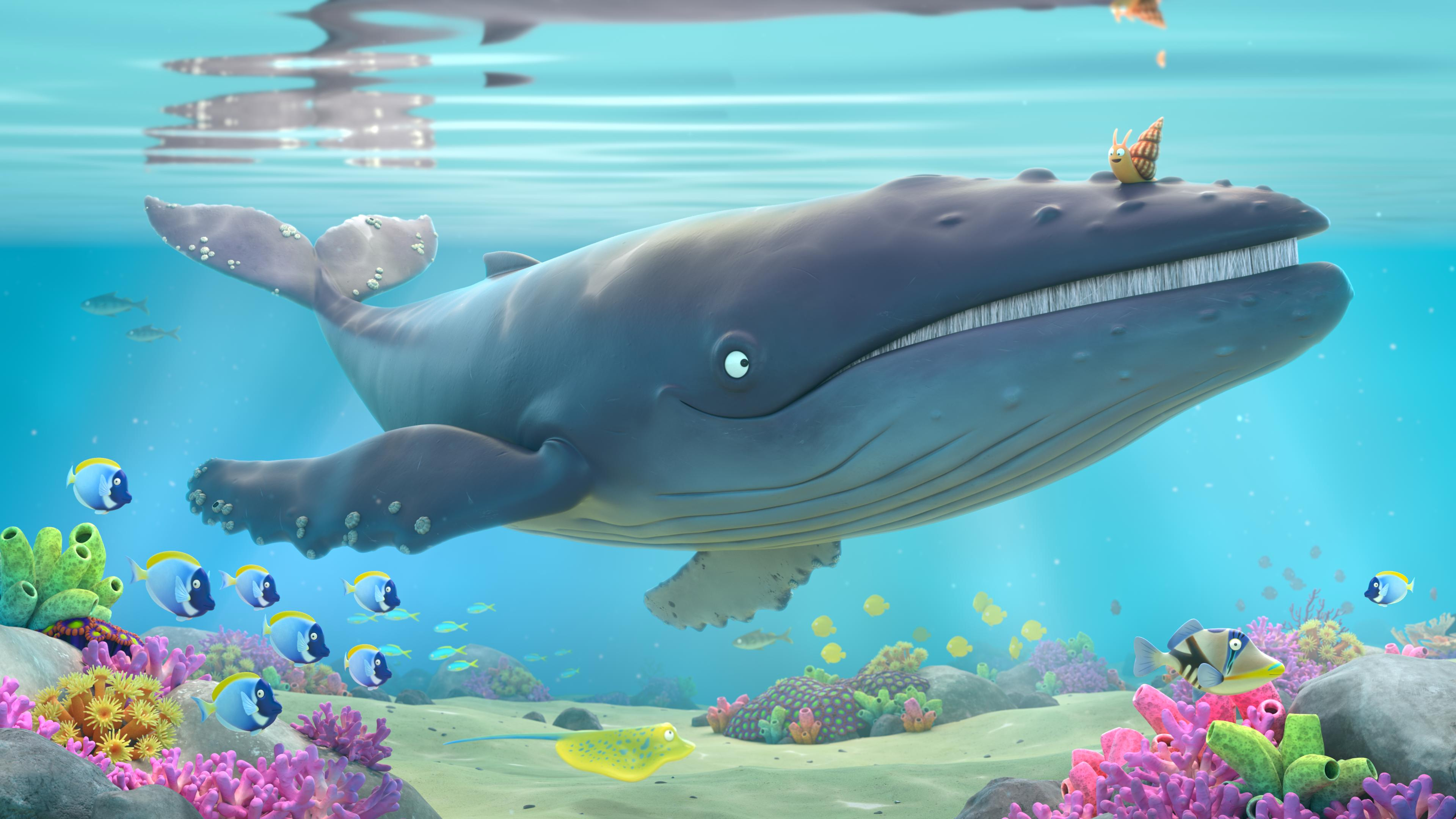 It’s something we realized early on, in The Gruffalo, that these films, because they’re a bit slower, that’s actually something to embrace. During the time we were making Gruffalo, we were really worried about that, stretching this seven-minute story into a 26-minute film. So, with Snail and the Whale, to me, it was really coming back to that. It was really embracing that principle and allowing us to give enough time to enjoy that kind of storytelling, that you don’t get to see a lot these days.

DEADLINE: On this short, you got to work closely with the late Dame Diana Rigg, an icon of stage and screen known to many as Game of Thrones’ Olenna Tyrell. What can you tell us about that?

SNADDON: It was amazing. Whenever we would do some takes with her, she would always look at our producers and say, “Boys, what do you think?” [Laughs] There was this real sense that she owned the space; it was her space, and we were delighted that she loved the book, and had read it to her grandson, I believe, and wanted to do it for family. And it wasn’t a small task, either. If you look at how many lines there are, a good 90% of them are the narrator, and so it was a long session. She gave us amazing takes, and we feel very privileged to have had the opportunity to work with such an icon.

DEADLINE: What’s next for you both? Is there another short on the way?

LANG: No other shorts right now. I’m taking it slow, working on picture books with my wife. Otherwise, I’m working on a story about autism, a feature film.

SNADDON: I’m developing a feature film with Triggerfish Animation and a U.S.-based studio, based on a property that I helped my friends [with, doing] a Kickstarter on a comic book. So, we’re turning that comic book into a movie, and that’s exciting. And I’m getting used to the pace of development.