If you can’t handle intense horror, you *may* be inclined to skip the opening scene of Freaky. The film kicks off with a traditionally scary intro to its villain, complete with chilling music and stomach-churning gore. Even Freaky‘s star, Kathryn Newton, says she had to leave the room while watching it. But stick around for a few minutes, and the "comedy" aspect of the horror-comedy will present itself, and you’ll be laughing just as much as — if not more than — you’ll be screaming.

The movie, which hits theaters Friday, Nov. 13, tells the story of Millie (Newton), a quiet teenager who accidentally trades places with a terrifyingly brutal serial killer, the Blissfield Butcher (Vince Vaughn). The title of the movie is a clear homage to the body-switching comedy Freaky Friday (although I personally see more parallels between this movie and The Hot Chick, starring Rachel McAdams, Anna Faris, and Rob Schneider). Regardless of its inspiration, Freaky may employ a ton of your fave horror movie elements, but the body-switching storyline sets it up for a ton of hilarity as well.

Newton isn’t a stranger to horror — she worked with Freaky‘s director, Christopher Landon, and the film’s production company, Blumhouse, in 2012’s Paranormal Activity 4. But in Freaky, she’s excited for fans to see her put a whole new spin on the "scream queen" trope as she embodies not only Millie, but the Butcher as well.

This interview has been edited and condensed for clarity.

Elite Daily: What drew you to Freaky and the dual role of Millie/the Blissfield Butcher?

Kathryn Newton: I was so excited to work with Chris Landon again and be reunited with Blumhouse. I had worked with them on Paranormal Activity 4 and I’ve been dying to work with them again. Chris Landon is an amazing human. He’s a total genius of horror though, so he’s a little mad. (Laughs) When he asked me to do this, I was like, "Are you sure?" He’s like, "You’re the one. You have to do this movie." I wasn’t going to say no.

I got to play two characters on the same day, so as an actor, I just had a blast. As a fan of this genre, I was just blown away that we got Vince Vaughn to be in it. He’s incredible in the movie and he brought it. He kills it as a teenage girl. ED: Did you and Vince Vaughn help each other to play your respective characters?

KN: Oh yes, we definitely did. We had rehearsals with Chris, and we would talk about situations and what Millie might be thinking. It was really cool to hear Vince talk about Millie, because we were able to go back and forth and create a character together. We had mannerisms that kind of laid the foundation for how each character carried themselves.

My favorite thing was in rehearsal, when we were doing scenes where I was the Butcher and Vince would be like, "I really want to feel like you’re going to kill me right now." And you just have to go for it. We were all in it 100% and we all wanted to make the best movie, so it was really inspiring to have that kind of collaboration. You can really only dream of that on a movie, and I hope that I get another experience like that.

ED: How did you work to convince viewers that you really were an evil, middle-aged, male serial killer?

KN: I had no idea that I’d be able to play a serial killer. I did not think I would be scary at all … I really just tried to keep it grounded. The more real you can make it in those situations — even the ones that are funny, they were funny because they were real and they’re honest. I think when you’re playing the honesty of a situation, that’s when you get the biggest laugh or the biggest scare, because they’re truthful.

We’d [also] improvise on set, so there was always a little bit of magic. Because you can’t plan all of that. Sometimes you don’t know it’s going to work ’til you get there on the day and you’re in the moment and you’ve got a chainsaw in your hands. It’s kind of funny when you are trying to be a serial killer and you don’t even know how to turn a chainsaw on. I had to learn quickly.

ED: Considering this is a horror and a comedy, were there any moments on set when a scene was supposed to be scary, but you and your costars had a hard time not laughing?

KN: I feel like everything we did was funny. I mean, me getting stabbed by Vince was the funniest day ever … I think it’s always the best, when you’re breaking character. It’s my favorite thing, to break. I know you’re not supposed to, but I like to have fun. 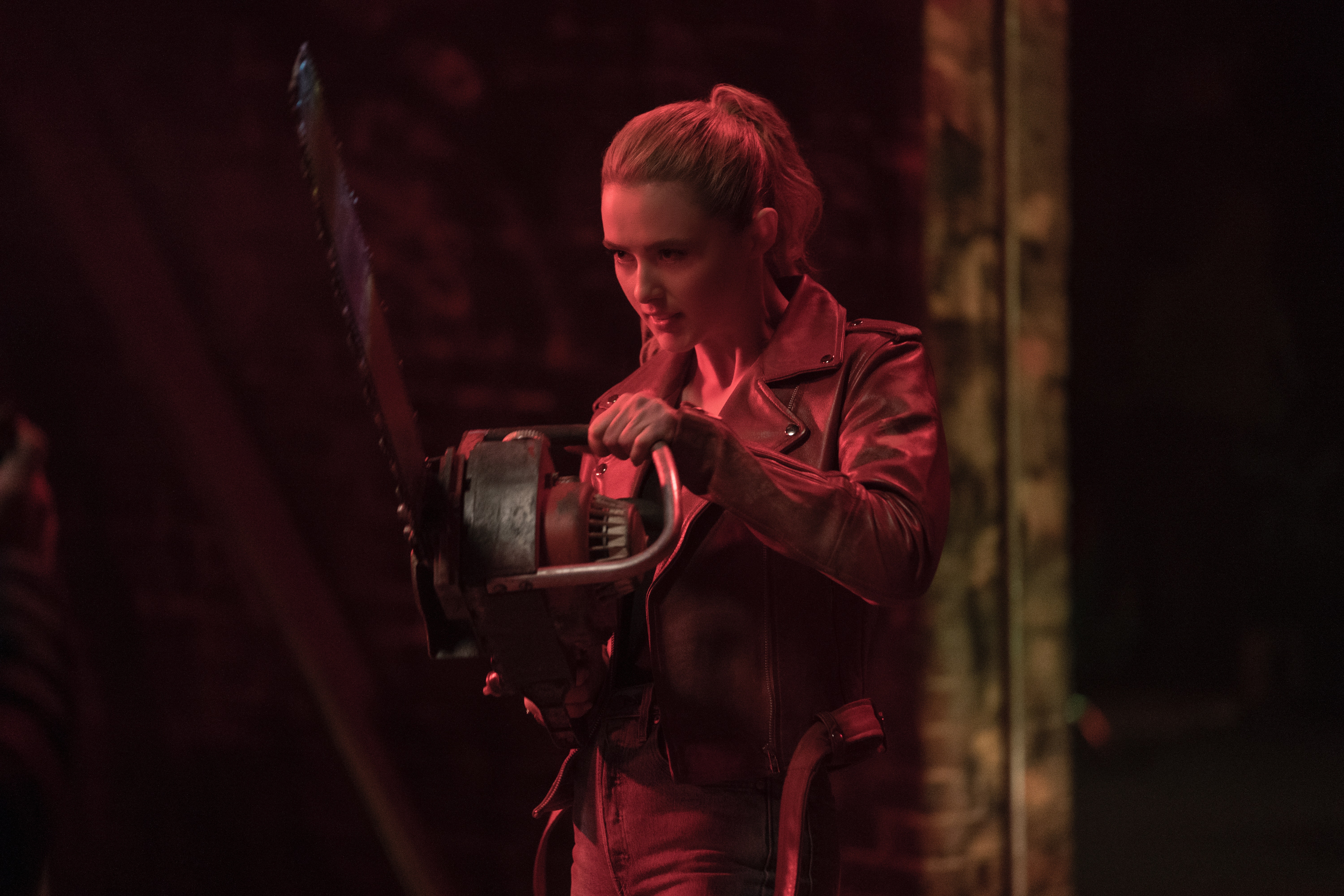 ED: How does Freaky flip the "scream queen" horror trope on its head?

KN: I feel like Freaky breaks so many tropes. This movie puts those tropes in your face and then just cuts them in half, and I love that. I was called a scream queen when I did Paranormal Activity and I thought that was the most cool thing ever, because I guess the word “queen” just got me all excited. But at the same time, everyone’s like, "No, you don’t want to be a scream queen because she always dies." And I don’t know if that’s true.

ED: Millie is a scream queen and a final girl!

KN: I think that’s iconic. I love how the movie does pull in those tropes, because it’s what I love about horror films. It’s all like an homage to Friday the 13th and Halloween, so if you’re a horror fan, you’re going to be satisfied. And if you’re new to the horror genre, I feel like this is a nice, easy way to get into it because you’re also going to laugh a lot. I laughed so much in this movie. I mean, my friends were screaming and I thought that was a win. I showed it to my mom and she was laughing, so I thought that was a win. So clearly anyone could watch this movie.

ED: Do you want to do more horror or horror-comedy projects after Freaky?

KN: I mean, I would’ve never dreamt of Freaky. In my wildest dreams, I would have never come up with this kind of movie, so I’m always going to keep my options open and keep dreaming big. I think that it would be awesome to be a final girl again — or a scream queen. It’s an honor, you know?

Alexis Eddy’s Cause of Death Revealed as Family Blames MTV