Matt Hancock recalled his family’s ‘harrowing’ money woes during a candid chat with Boy George and Seann Walsh on Tuesday’s I’m A Celebrity…Get Me Out Of Here!

The trio, alongside Jill Scott, had been having a discussion about generational differences between parents when talk soon turned to money and the hardships they faced years previously.

And while Matt confessed his family ‘nearly lost everything’ after his step-father’s business ‘went bust’, Boy George told how his ‘gambler’ father blew £10,000 on greyhound racing. 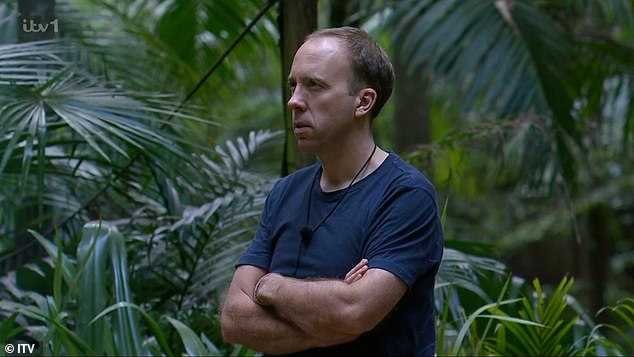 Open: Matt Hancock recalled his family’s ‘harrowing’ money woes during a candid chat with Boy George and Seann Walsh on Tuesday’s I’m A Celebrity…Get Me Out Of Here!

After Jill had remarked that their parents were from a generation of ‘don’t show any weakness’, George, 61, recalled fearing the bailiffs coming while growing up amid his father’s difficulty with money.

‘Dad would say, ‘Don’t answer the door… the bailiffs, or the gas man was coming…”

Seann, 36, then turned to the former health secretary, asking: ‘Did you have the bailiffs round yours Matt?’ 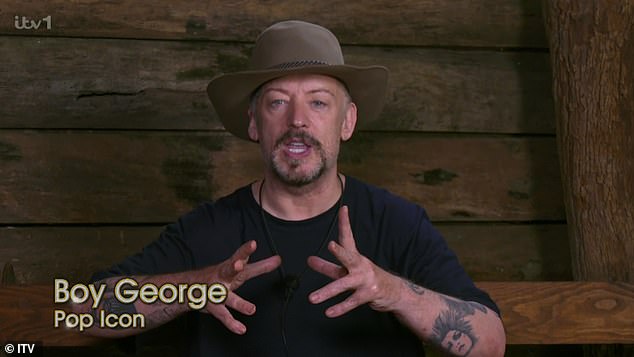 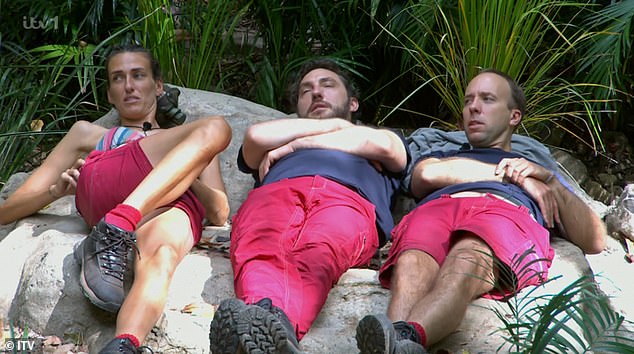 Open: After Jill had remarked that their parents were from a generation of ‘don’t show any weakness’, George, 61, recalled fearing the bailiffs coming while growing up

To which Matt, 44, replied: ‘When the business nearly went bust we nearly lost everything.

‘You know when you type your postcode into the internet and it brings up your address? My stepdad wrote that software. The business started in ’88 and in the early 90s is when it nearly went bust.’ 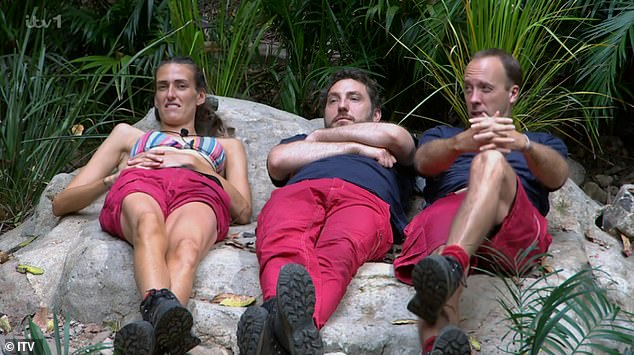 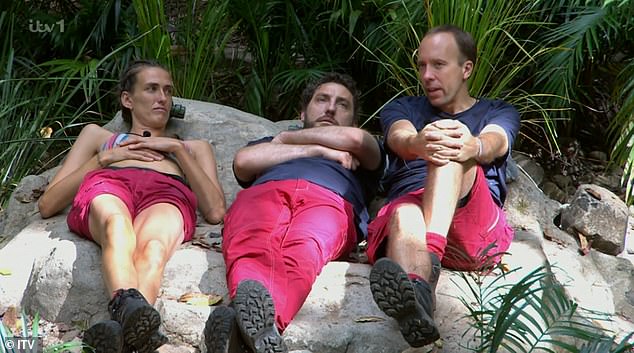 Insight: Seann, 36, then turned to the former health secretary, asking: ‘Did you have the bailiffs round yours Matt?’

To which Matt replied: ‘Well you said have you ever had the bailiffs round!’

It comes after Christopher Biggins said he thinks Matt Hancock will make it to the final three in I’m A Celeb as he appeared on MailOnline’s Jungle Confidential podcast.

The winner of the 2007 series, 73, told how he thought the former health secretary’s ‘charm’ was winning over audiences and the camp of celebrities as well. 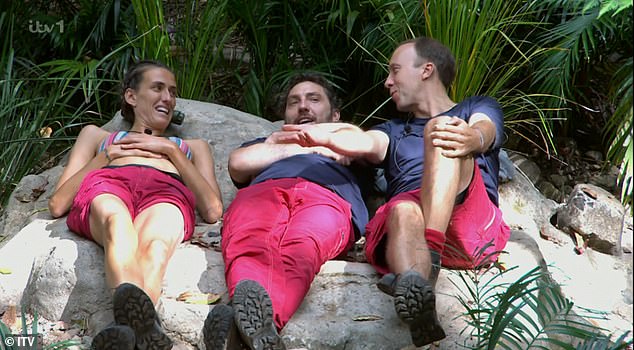 Troubles: To which Matt, 44, replied: ‘When the business nearly went bust we nearly lost everything’, explaining his stepfather went bust after creating a postcode software 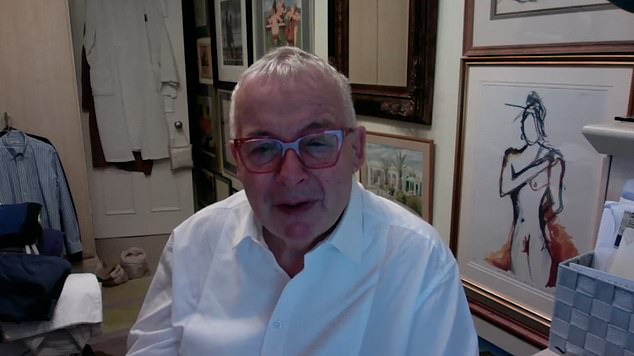 Revelations: Christopher Biggins has said he thinks that Matt Hancock will make it to the final three in I’m A Celeb as he gave his take on the latest episode while appearing on MailOnline’s Jungle Confidential

Matt’s decision to join the jungle has been controversial, with his fellow campmates such as Charlene White and Boy George relentlessly grilling him on his choice to enter.

But the former King of The Jungle said: ‘He’s doing everything brilliantly and however much you may hate him he is a player and he goes for it, he really does go for it he gets all the stars.

‘He feeds the camp, he’s charming and has won over the camp and I think is winning the audience over too. 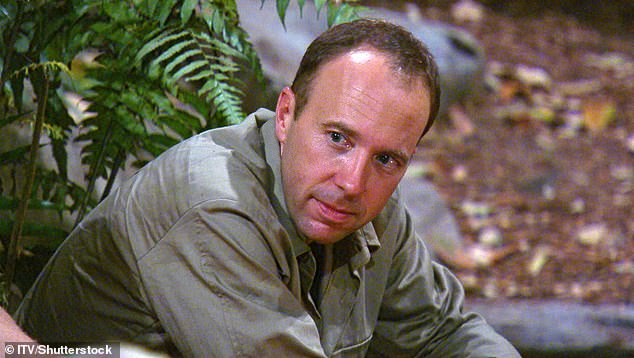 Candid: The former health secretary’s ‘charm’ was winning over audiences and the camp of stars as well, Christopher said

‘Originally people thought the best thing would have been if he was first to go out. You never want to be first out as it’s humiliating.

‘And I thought people would want to humiliate him but no. I think he will go to the last three and last pivotal as they are the real big stars. He could make it to the final three given the way people are voting.’

I’m A Celebrity… Get Me Out of Here! continues at 9pm on Wednesday on ITV1 and ITVX.

I’m A Celebrity 2022: All you need to know about this year’s show

MISSING ANY BIG OCCASIONS? No, I am going straight into the jungle from playing at various festivals and gigs

ROLE IN THE CAMP: In-house dietician reassuring everyone that they will be ok on the jungle diet. And entertainer – I will sing!

BEST ATTRIBUTE: I am a very positive person and I don’t bear any grudges

DREAM CAMPMATE: It would be funny if my ex, Jon Moss, comes on the programme -but I don’t think that will happen!

PHOBIAS: I am petrified of heights. I ended up carrying the bags when we took my girlfriend’s niece once to Go Ape as I am so petrified!

MISSING ANY BIG OCCASIONS? A friend’s birthday, a wedding, and Leeds United matches

ROLE IN THE CAMP: Entertainer. Hopefully I can help shorten everyone’s boredom.

BEST ATTRIBUTE: Hiding food! I am going to fly out early and sneak into the jungle and hide pot noodles everywhere, then I will be everyone’s best friend!

DREAM CAMPMATE: Ant and Dec…let’s see how they cope for 24 hours!

PHOBIAS: Don’t be ridiculous! I am not going to admit to what I fear most!

MISSING ANY BIG OCCASIONS? Coronation Street and we are expecting another grandchild any day, so hopefully it will arrive before I fly out to Australia.

ROLE IN THE CAMP: I will be more of a mum – that is where I will naturally fit.

BEST ATTRIBUTE: I can cook and I am a good listener, so hopefully I will be a friendly ear for everyone.

DREAM CAMPMATE: Good Morning Britain’s Richard Arnold. He is my TV husband and it would be lovely to have an ally in camp!

CLAIM TO FAME: Presenter of A Place In The Sun

PHOBIAS: Spiders. There is no point in lying about it! I’ve got an irrational fear about them

MISSING ANY BIG OCCASIONS? Just a holiday which I can postpone

ROLE IN THE CAMP: Mum, cook and morale booster. I always like to look at the positive side in life

BEST ATTRIBUTE: I can cook and I will be good at making sure everything is tidy in camp

DREAM CAMPMATE: Mo Gilligan. He is hilarious and I totally fancy him!

PHOBIAS: I am scared of absolutely everything. Snakes, rats – I am fearful of them all and I am dreading the trials

MISSING ANY BIG OCCASIONS? I was going on tour but we’ve postponed it now until next year

ROLE IN THE CAMP: Tension breaker. If I can break tension anywhere it starts up in the camp, then I will do that. We don’t need to be bickering as it will be a first-time experience for everyone

BEST ATTRIBUTE: Hopefully I will bring some humour to the camp

DREAM CAMPMATE: I am a big Arsenal fan and so any ex-Arsenal player would be great. I am looking forward to chatting to Ant & Dec about football

PHOBIAS: I am not too pleased about rats being in there but I am just trying to pretend it is not happening!

MISSING ANY BIG OCCASIONS? No, I am really looking forward to taking part in this show

BIGGEST MISCONCEPTION YOU WANT TO DISPEL IN THE JUNGLE: People have voiced their feelings about me and I am hoping they will see I am very different. I want to create new memories

ROLE IN THE CAMP: I am a great listener. I can’t cook but if someone would like to teach me, then I will give it a go

BEST ATTRIBUTE: I don’t want to put myself down but if my friends were to answer this question, they would say there isn’t much Seann can do! I am not really bringing too much to the table which is why I am a good listener!

DREAM CAMPER: Lee Evans, anyone from Blink-182 or Boy George. My mum took me to see him at Wembley and he wore a satellite dish as a hat!

PHOBIAS: I haven’t admitted to having any phobias but in a weird way, I am looking forward to taking part in the trials!

MISSING ANY BIG OCCASIONS? My podcast series and the rugby Internationals this autumn

ROLE IN THE CAMP: Morning motivator. I would like to see everyone get on well and us all have a great experience

BEST ATTRIBUTE: I am a positive person

DREAM CAMPMATE: Samuel L Jackson would be cool. He has lived the life!

MISSING ANY BIG OCCASIONS? I am a big fan of football so I will miss watching the start of the World Cup

ROLE IN THE CAMP: Entertainer and games coordinator

BEST ATTRIBUTE: It is definitely not my cooking skills or brains!

DREAM CAMPMATE: Any of the Leicester City starting 11!

PHOBIAS: I am not sure what my fear factor will be because I’ve never had rodents, spiders and snakes crawling all over me!

MISSING ANY BIG OCCASIONS? My children’s annual school ball which I am gutted about

ROLE IN THE CAMP: Mum and cook. I don’t mind falling into that position

BEST ATTRIBUTE: I like to listen and talk. I love learning about people and I have a natural curiosity for people

PHOBIAS: I don’t like rats and the thought of being underground fills me with fear!

MISSING ANY BIG OCCASIONS? The Men’s World Cup. I am going to find it weird not being able to know how the men are getting on in the tournament. Hopefully they will still be in the tournament when I come out of the jungle

ROLE IN THE CAMP: Helping hand. I like to help people if they aren’t having a good day

BEST ATTRIBUTE: Hard worker. I will always find a way to add value. I am also very honest

DREAM CAMPMATE: Another sports person would be great as it would be someone to bounce ideas off.

PHOBIAS: I hate the dark so I’m keen to avoid any challenges in the darkness

MISSING ANY BIG OCCASIONS? No, had the show been on air any later, I could have missed my sister’s wedding

ROLE IN THE CAMP: Clown. I was always the class clown at school and I love having a laugh

BEST ATTRIBUTE: I don’t take myself seriously and I have got a good sense of humour

DREAM CAMPMATE: A pop legend like Dolly Parton who has amazing stories to tell

PHOBIAS: Snakes. I don’t thankfully suffer from claustrophobia –or I think I don’t!

BIGGEST MISCONCEPTION YOU WANT TO DISPEL IN THE JUNGLE: Politicians are people too and it will be nice for people to see me as me. We are human too

ROLE IN THE CAMP: I like to muck in, and I think I will be collecting a lot of firewood. I like cooking too