Heidi Klum and husband Tom Kaulitz had a blast on the set of ‘Germany’s Next Topmodel’ on March 22! See the couple dancing in a flirty clip!

Heidi Klum and Tom Kaulitz put on a PDA show on Monday when the Tokio Hotel musician, 31, visited the supermodel, 47, on the set of Germany’s Next Topmodel — the competition series in which Heidi hosts. She shared a cute boomerang video to her Instagram Stories that showed the couple dancing in front of a step and repeat.

Heidi showed off her long legs in a sparkling gold mini dress that featured long sleeves and a sultry slit. She jumped up and down in the clip, while Tom patted her behind with what looked like an inflatable thunder stick — a fun noise-maker that’s typically used by fans at sporting events. Heidi, who held onto her own thunder stick, used it as a pretend microphone in the video.

Heidi’s been keeping busy with work throughout the COVID-19 pandemic. The model will return to NBC’s America’s Got Talent for its upcoming 16th season, alongside returning judges, Simon Cowell, Howie Mandel and Sofia Vergara. Although the show films in LA and Topmodel‘s production takes place in Germany, Heidi has made both gigs work very well. 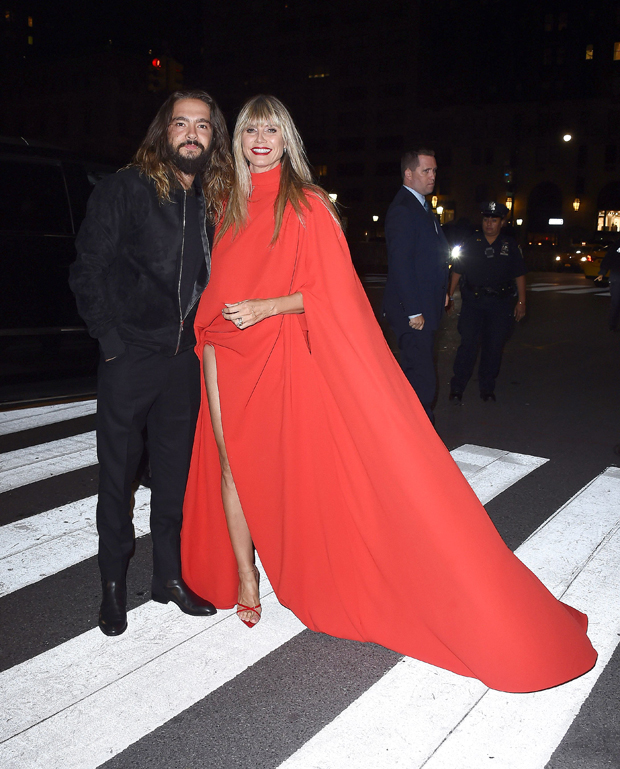 The runway star recently shared, via Instagram, that she took a road trip with daughter Leni, 16, who she filmed behind the wheel of a car. According to Heidi’s posts, the pair reunited with Tom in Germany. The model has previously gushed that her kids — daughters Lou, and Leni, and sons Johan, and Henry — are big fans of Tom.

The model and musician tied the knot in secret during a February 2019 ceremony in California — before they said “I do” in a second ceremony that August, in Capri, Italy. Heidi confirmed the couple’s engagement on Instagram in 2018, writing, “I SAID YES,” alongside a black and white photo of pair that showed off her massive diamond ring.  Heidi and Tom, who reportedly met through a mutual friend on Germany’s Next Topmodel, dated for about eight months before he popped the question. They made their public debut as a couple at the Cannes amfAR Gala in May 2018.