For pity’s sake, don’t tell Piers Morgan – but ITV chiefs are in ‘despair’ over their failure to find a man to step into his shoes permanently on Good Morning Britain.

But The Mail on Sunday understands none was deemed a suitable permanent replacement, and with long-serving GMB presenter Ben Shepherd on air for only a couple of days a week, bosses have given up their search and will instead rotate male stand-in hosts. 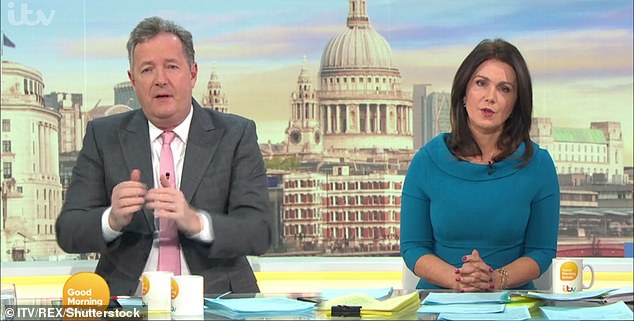 The fruitless hunt will no doubt delight Morgan. But it is thought to have dismayed ITV, which is proud of female presenters including Ms Reid, Kate Garraway, Ranvir Singh, Laura Tobin and Charlotte Hawkins.

Head-hunters also fear some experienced presenters did not put themselves forward because they are friends with Morgan.

A source said: ‘Replacing Piers was always going to be tough, but no one thought that almost a year on they still wouldn’t have found anyone. It is one of the biggest shows on TV, so it really shouldn’t have been this hard.

‘It didn’t occur to bosses that many of the big presenters would rule themselves out because they are friends with Piers. He is a very loyal man and that loyalty is reciprocated. It is a real headache.’

Morgan, 56, left GMB last March after refusing to apologise for comments he made about the Duchess of Sussex’s mental health.

The former MoS columnist’s outburst prompted a record 58,000 complaints to Ofcom, which cleared the broadcaster.

Last night, an ITV spokesman said: ‘The show is performing well with the roster of guest hosts alongside our existing family of presenters and there are no current plans to change this.’

How did Beyoncé meet Selena Quintanilla?