Could Matthew Perry BE any more talked about right now??

The Friends alum can’t seem to stay out of the spotlight lately, and only a fraction of that is the effusive love from fans for the HBO Max reunion special.

First there was the mini scandal in which he was busted chatting up a then-19-year-old woman on Raya — after she shared the video of their interaction, saying she wanted to expose older men on the site who were “talking to such young girls.” (Unsurprisingly, she was subsequently kicked off.)

Up next was fan concern Perry was having health issues after he seemed to slur his speech in an interview promoting Friends: The Reunion. Thankfully that mystery seems to have been solved.

But it wasn’t a week later that we learned the 51-year-old had split from his fiancée, Molly Hurwitz, after more than two years together. He confirmed the news with the short statement:

“Sometimes things just don’t work out and this is one of them. I wish Molly the best.”

The obvious guess as to why the couple split was the Raya thing. Even though they were supposedly on a break (LOLz!) at the time, seeing your man flirt with a teenager is going to be a big turnoff for a lot of women.

However, some fans think they’ve sussed out another reason. They think he’s dating his longtime assistant, Briana Brancato!

A post shared by B R I A N A (@brianabrancato)

Why? Well, he had been getting Molly to model his Chandler merch with him, but in his most recent Instagram post, it’s Briana by his side, as he captioned:

“Ready for the long weekend and an even longer bath! After a week like this, I know my team is! Shop the entire collection and let the relaxation begin!”

She posted a similar photo on her IG:

A post shared by B R I A N A (@brianabrancato)

While most of the commenters were supportive of Matthew after the reunion, there were several who smelled something up with his assistant.

Maybe it was the body language or the fact he never had pics of Briana on his IG before? For whatever reason, there was a lot of speculation, with one follower straight up asking if they were sleeping together.

Hmm. The simplest solution is that he just needed a new female model for his merch, right? Since the split Molly has deleted almost her entire IG feed, including all pics in which she was sporting her ex’s Friends-wear.

But who knows, maybe things did change with Briana. Considering it was months before we even learned he was dating Molly, it’s a good bet we won’t find out anytime soon.

Do YOU think Matthew has already moved on?? 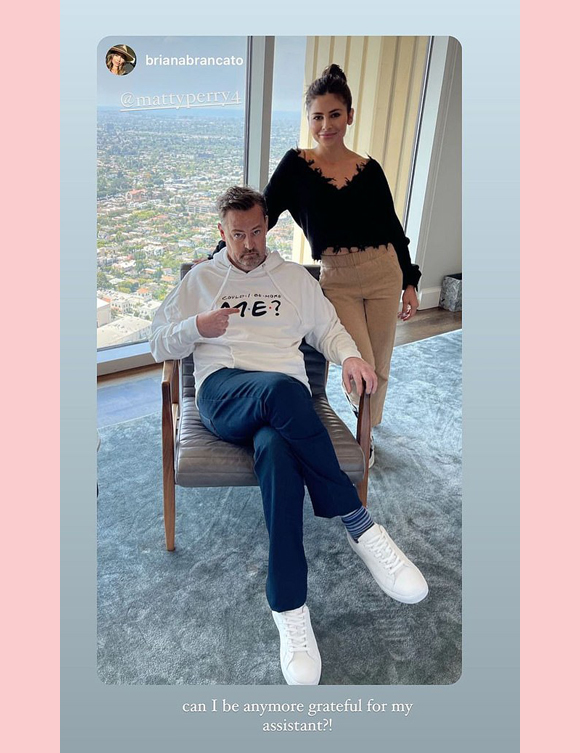