Commenting on the plus-size model’s cover debut for Sports Illustrated Swimsuit through his Twitter account is dr. Jordan Peterson, a controversial clinical psychologist and YouTuber.

AceShowbiz -There’re no body-shaming in this household. On Monday, May 16, fans jumped into Yumi Nu‘s defense after a controversial clinical psychologist and YouTuber shamed her by calling her “not beautiful” while commenting on the plus-size model’s cover debut for Sports Illustrated Swimsuit.

Dr. Jordan Peterson took to his Twitter account to blast Yumi’s cover. Quote-retweeting a tweet from New York Post, he wrote, “Sorry. Not beautiful. And no amount of authoritarian tolerance is going to change that.” His post earned him backlash in no time.

“my guy you look like a child’s skeleton covered in mayonnaise with dryer lint on the top. you’re in no position to be assessing anybody’s beauty you rickety junkie,” one person replied. Another commenter wrote, “Jordan, this isn’t about you or about beauty at all! You’re missing the point as it’s about acknowledging, accepting, and celebrating all those women in the world who have similar physical archetype. We should all accept and then encourage each other to be our best selves.”

“Standards of beauty change over time. Plus you posted two studies that don’t substantiate your point,” someone else added. “He’s always been a parody of an ‘intellectual’ psychologist, dummies,” another said.

“‘Authoritarian’? Chunky women on magazine covers? You sound like a parody of you,” one Twitter user slammed the best-selling author. To the comment, he replied, “It’s a conscious progressive attempt to manipulate & retool the notion of beauty, reliant on the idiot philosophy that such preferences are learned & properly changed by those who know better. But don’t let the facts stop you.” 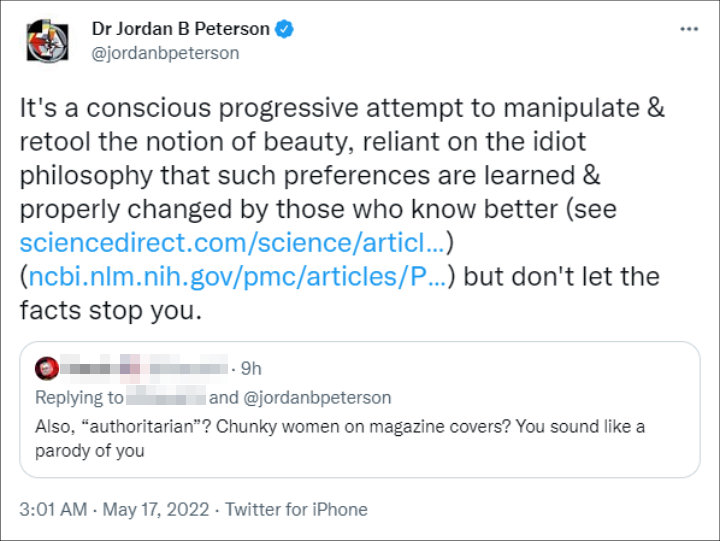 The clinical psychologist fired back at a critic.

That aside, Yumi expressed her excitement over the cover debut. “I could not speak. I had full-body chills. I was shaking, I was crying. They really got me good,” the curvy Asian model shared with The Post. “It’s amazing. I’m on cloud nine. This is nothing I could prepare for. It’s unexpected.”

“I feel like we’re in a place right now where people are making space for more diversity on magazine covers. It’s a big time for Asian American people in media. I know I play a big role in representation in body diversity and race diversity, and I love to be a role model and representative of the plus-size Asian community,” she continued.