If Eminem is smiling today, it’s because his daughter, Hailie Jade, proved that she not only listens to her father’s music, she’s also one of his biggest fans.

Usually, when you’re a woman in your mid-twenties and your nearly fifty-year-old father is caught up in his passion for making music, it’s a recipe for cringe. Yet, that’s not the case for Hailie Jade. The daughter of Eminem got in on the fun of sharing her Spotify Wrapped on Wednesday (Dec. 1) by posting a TikTok that made use of the Wendy Ostefo/”Am I a Nicki [Minaj] fan?” meme. In the video, Haile, 25, sat in a car while wearing an off-white fleece coat. “Do You Listen To Your Dad’s Music?” asked the caption appearing above her head. “What??? DO I Listen To My Dad’s Music?” responded Hailie, before quoting “My Dad’s Gone Crazy” – the song from 2002’s The Eminem Show that featured her – and showing that her top Spotify artist for 2021 was Eminem. She was also in the Top 3% of her 49-year-old father’s listeners for the year.

Fans dug the video. “I know you and your dad keep things extremely private, but we love your relationship. This was such a cute video,” wrote one viewer. “As a Hayley who felt your dad was personally rapping to me as a young child, I’m right in that 3% with you,” said user Hayleyyjay. “You just mentioning Em made so many people happy,” said another. “This is the cutest thing I’ve seen all week,” commented Kiera Bridget. “I always figured that musicians’ kids don’t listen to their parents’ music because they must be tired of it, so this actually pretty cool to see,” wrote another. Though, @hi.this.is.tatum playfully called out Hailie. “Top 3%? Those are rookie numbers. You gotta bump those numbers up.”

It’s not every day that Hailie opens up about her dad. She’s focused more on building her own brand as a social media fashionista and online influencer. With more than 2.2 million followers on Instagram, Hailie shares glimpses into her day-to-day life and her latest outfits (like the backless crop top and leather pants combo she posted in mid-November). On the same day that she posted that Spotify TikTok, she shared an Instagram Story taken of her in the car. “If u couldn’t tell by my face, the ‘have so much to do option’ is me,” she wrote alongside a “Hello December” poll, the choices being “I’M READY” or “Have So Much To Do.” 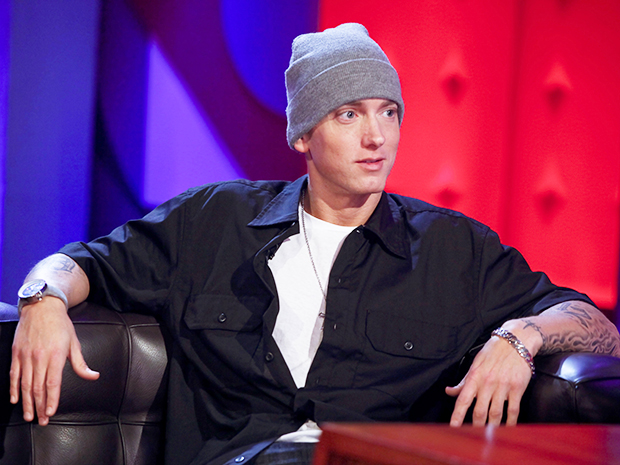 Hailie is the only biological child between Eminem and his ex, Kimberly Anne Scott. Em is also the adoptive father of Alaina Mathers, the biological daughter of Kim’s twin sister, Dawn Scott, and Stevie Lane, Kim’s child from a prior relationship. In August, Stevie declared themselves non-binary while also suggesting that Em never told them that they were adopted.