Dua Lipa could hardly contain her emotions as she learned over the phone that she had earned six Grammy Award nominations! Watch the tearful clip of the ‘Future Nostalgia’ singer here!

Dua Lipa couldn’t believe what she heard over the phone from her team of supporters on November 24 when she learned that she had earned a whopping six Grammy nominations! In the clip, posted to her Instagram, the British pop singer, 25, was completely bowled over, sitting on the edge of a couch and crying her eyes out. “You’re f–king joking me,” Dua said, using her hand to cover her eyes as she spoke on the phone.

The singer still couldn’t believe what she was hearing, saying “you’re joking” over and over again to the person on the other end of the line. Finally, Dua looked up and brushed her tears away, telling her friends that she had just been nominated for six Grammy Awards! As if the video of her reaction wasn’t enough, Dua wrote an equally emotional and emphatic caption to her Instagram post. 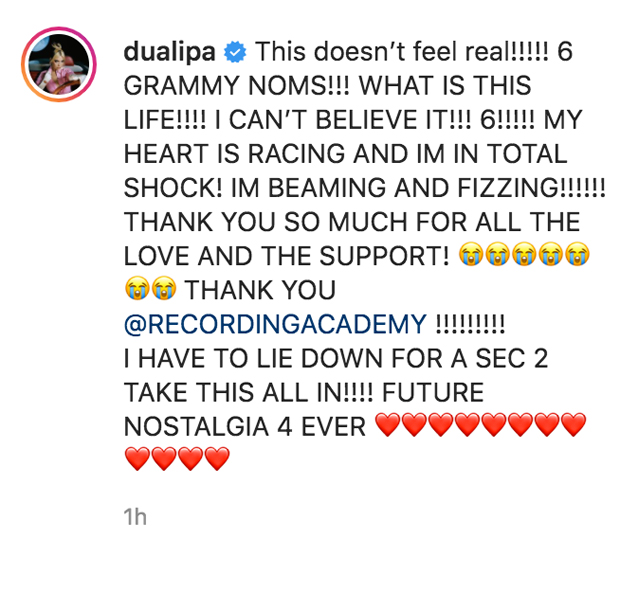 “This doesn’t feel real,” she began her caption, followed by a string of exclamation points. “6 GRAMMY NOMS!!! WHAT IS THIS LIFE!!!! I CAN’T BELIEVE IT!!! 6!!!!! MY HEART IS RACING AND IM IN TOTAL SHOCK! IM BEAMING AND FIZZING!!!!!! THANK YOU SO MUCH FOR ALL THE LOVE AND THE SUPPORT,” she wrote, adding a slew of crying emojis after her words. “THANK YOU [Recording Academy],” she continued. “I HAVE TO LIE DOWN FOR A SEC 2 TAKE THIS ALL IN!!!! FUTURE NOSTALGIA 4 EVER,” she concluded her statement, adding a series of red heart emojis after her words.

The singer is already a decorated artist, and has two Grammy Awards to her name! At the 61st Annual Grammy Awards, Dua earned two statuettes for Best Dance Recording for “Electricity” and Best New Artist! Fans are so excited for their favorite singer, and we cannot wait to see Dua Lipa at the Grammy Awards on Sunday, January 31 on CBS!

When Do Amazon’s Black Friday 2020 Deals Start? You’ll Get An Extra Week Of Deals