Drake on Tuesday was granted a three-year restraining order against a woman who he said has been stalking him and made death threats against him and his son.

The 35-year-old Canadian superstar’s lawyers, Larry Stein and Ashley Yeargan, were present for a hearing in court in Los Angeles, TMZ reported, where the judge implemented the restraining order that orders the woman to keep a minimum of 100 yards from the musical star and his family.

Drake’s alleged stalker – who was identified as Mesha Collins, 29, in court docs March 3, according to E! News – was not present for Tuesday’s hearing, TMZ reported, as the judge ruled she’d been ‘given timely and proper notice’ to defend herself in the case. 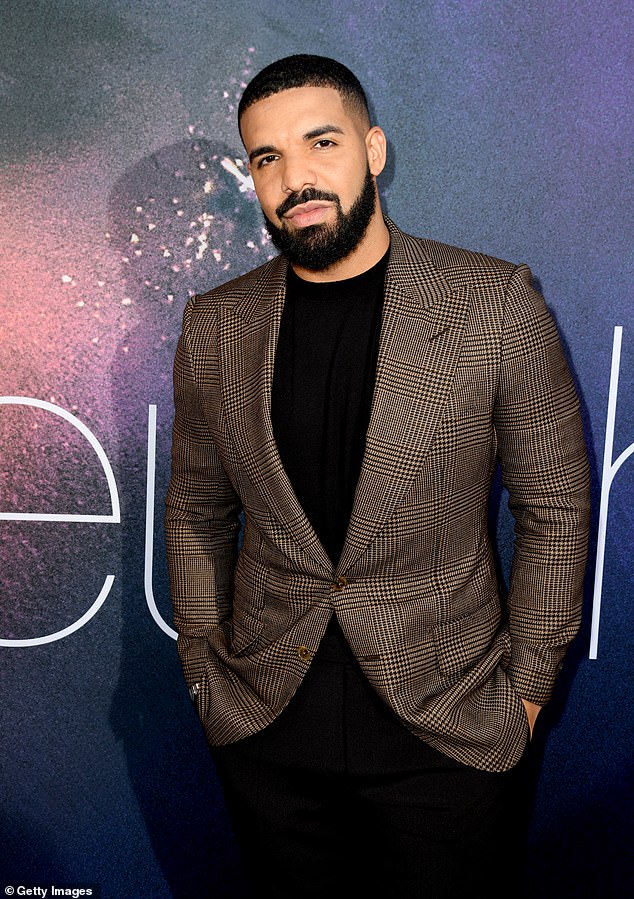 Granted: Drake, 35, on Tuesday was granted a three-year restraining order against a woman who he said has been stalking him and made death threats against him and his son. He was pictured in LA in 2019

The Toronto native said in court docs last month that Collins – who he has never met or spoken to – had made threats against him and his four-year-old son Adonis, who he shares with artist-model Sophie Brussaux.

‘She has sent messages saying she wishes me dead, and that I should shoot myself and my son with a bullet,’ Drake said in court docs. ‘As a result of Ms. Collins’ harassment and obsession with me, I have suffered and continue to suffer emotional distress and am concerned for my safety and that of my family.’

The God’s Plan performer, whose full name is Aubrey Drake Graham, said in court docs that Collins had been harassing him sporadically over the last five years.

Collins in April of 2017 was arrested in connection with trespassing at Drake’s home in the Hollywood Hills of Los Angeles. 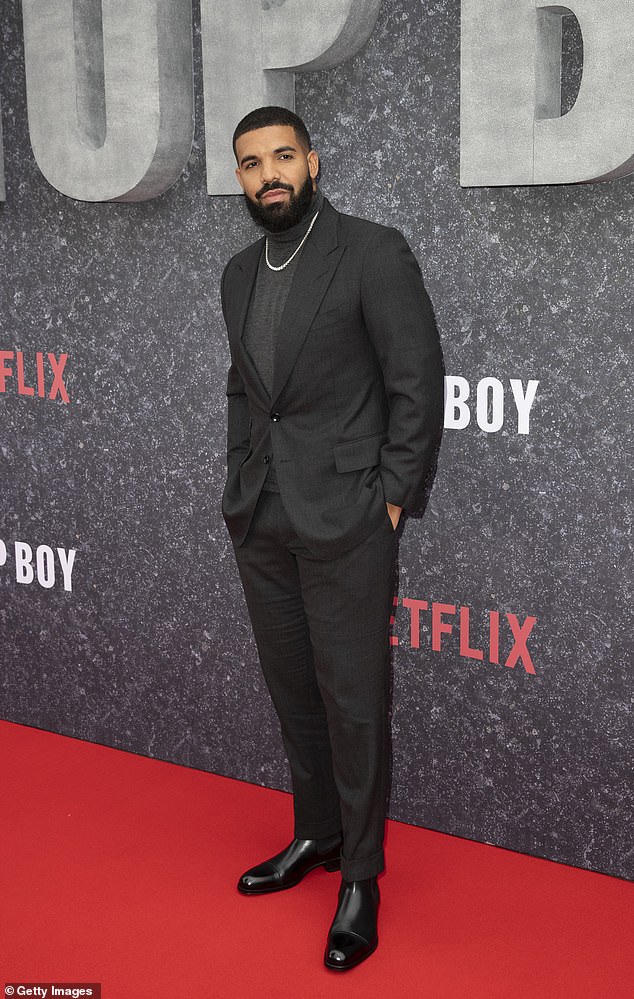 Allegations: The Toronto native (pictured in London in 2019) said in court docs last month that he has never met or spoken to Collins 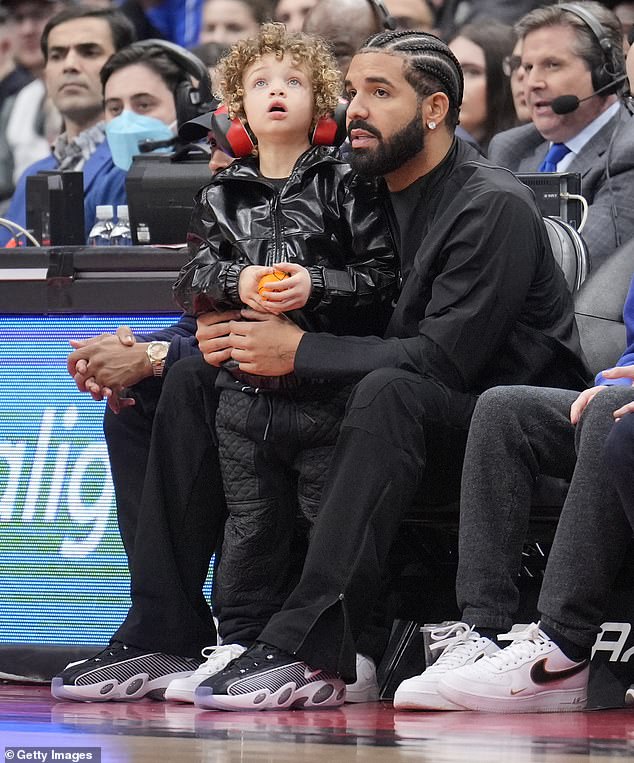 Details: Drake said in court docs last month that Collins had made threats against him and his four-year-old son Adonis; the two were pictured earlier this month in Toronto 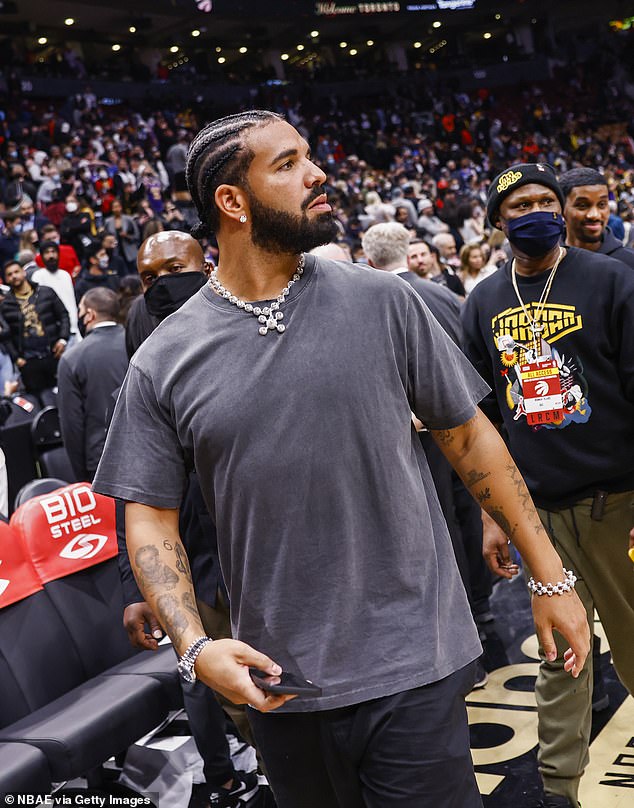 Out and about: Drake was seen at a Raptors game in his native Toronto last month

Collins in August of 2021 filed a $4 billion lawsuit against Drake, accusing the rapper of defamation and invasion of privacy linked to social media posts on his account; she sent an email to Drake’s lawyer last December identifying herself as homeless and asking for mediation in the case.

Drake’s legal team said the lawsuit was an attempt for Collins to contact the rapper, and a ‘frivolous case’ stemming from ‘delusional figments of her imagination,’ Billboard reported. A Los Angeles Superior Court subsequently dismissed the case, saying there was no evidence Drake made any reference to Collins in his posts.

Appearing in court in February, Collins ‘conceded that she has been arrested three times for trespassing on [Drake]’s property and another five to six times for assaulting or spitting [toward] his fans, or otherwise disturbing the peace surrounding’ the entertainer.

Collins that month had also unsuccessfully attempted to obtain a restraining order. Drake’s lawyer said in legal docs that he had asked Collins to serve him with the suit (instead of Drake) and told her not to try to serve the rapper in person or at his home.

Drake’s lawyer said that Collins ‘sent [him] a series of extremely disturbing emails’ in which she threatened ‘not only [Drake], but also his son and myself. In these messages, she expresses her desire that Mr. Graham die and that I get what I “deserve.”

‘It is clear that Collins’s behavior and obsession with Graham is escalating, and I am very concerned by the contents of these messages which I believe necessitate the entry of a restraining order against her.’