Donald Trump is once again shading Joe Biden during his time of post-presidency leisure, this time making jokes about his golf skills.

Donald Trump is still talking about Joe Biden following his reelection defeat several months ago. The former president, 75, took a shot at the current president, 78, during a round of golf in a video shared on Wednesday, Sept. 22. In his signature “Make America Great Again” cap, Donald hit a tee then asked a crowd of onlookers, “You think Biden can hit a ball like that?”

The onlookers were amused by the remark, laughing and cheering on America’s former head of state. Donald loves his golf — so much so that he reportedly had a giant projector screen that displayed virtual golf courses from around the world in the White House during his presidency. A new book by journalists Bob Woodward and Robert Costa offers insight into the setup — one that elicited quite the response from Joe when he moved in with his administration.

According to Bob and Robert’s Peril, a newly-released book that chronicles the rocky transition from a Donald Trump presidency to a Joe Biden one, Joe had a hard time adjusting to the “cold” White House following Donald’s tenure. The authors reported that the president had an interesting response to Donald’s virtual golf course room. Per an excerpt published by ABC News, Joe called his predecessor an “a-hole.” 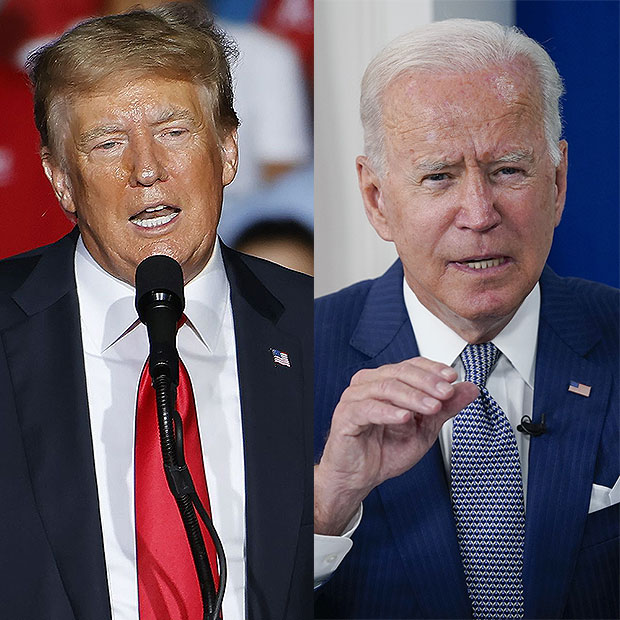 “One night, Biden wandered into a room where a huge video screen covered the wall,” the excerpt read. “To relax, Trump used to upload programs to virtually play the world’s most famous golf course. ‘What a f—— a——,’ Biden once said as he surveyed the former president’s toys.” (HollywoodLife has reached out to the White House for a comment on the new book.)

The authors explored the former president’s love for the sport in another excerpt, too — one that detailed his reported dismissal of building a golf course in Africa due to his wariness of lions. (The former real estate developer has several golf courses across the country, including Scotland and Dubai, as well as various locations in the states.)

The excerpt recounted Donald’s response to South African golfer Gary Player’s suggestion to build a resort in Africa: “What happens, Gary, when two lions look out and say, ’You know, that’s a pretty thick guy. I’d like to eat him. Let’s go eat him,’” he reportedly said in response. When Gary suggested “fences and stuff,” Donald replied, “You mean they can’t climb over a fence?”

Lady Gaga: The Truth Behind Her Awkward Interview With Jimmy Fallon Revealed