Never mind that Amara Okereke is the first black Eliza Doolittle in a West End production of this joyous musical based on George Bernard Shaw’s Pygmalion.

First and foremost, Miss Okereke is quite simply a fabulous Eliza. She’d very likely be hailed down the East End not so much a ‘diamond geezer’ as a diamond diva.

She illuminates an illustrious company which also features Harry Hadden-Paton as the short-fused Henry Higgins – a professor of linguistics who transforms the cussing Cockney flower girl into a high-society debutante. 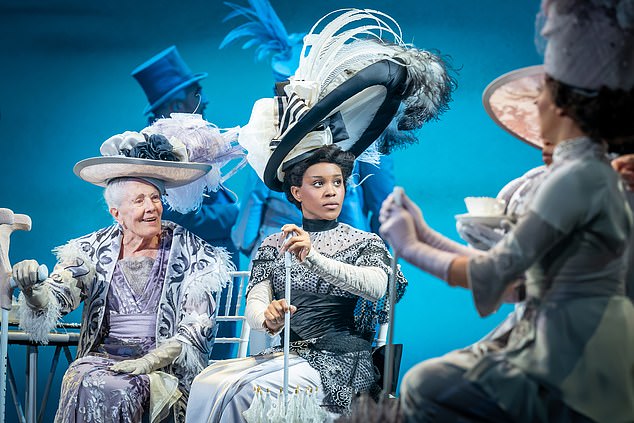 My Fair Lady reviewed: ‘Miss Okereke (right) is quite simply a fabulous Eliza. She’d very likely be hailed down the East End not so much a ‘diamond geezer’ as a diamond diva’

Bartlett Sher’s production of the Lerner and Loewe musical – best known to most of us from the 1964 film starring Rex Harrison and Audrey Hepburn – is an import from New York’s Lincoln Center.

Surprisingly, the staging is a little dwarfed by the widescreen Coliseum stage – a rare instance of American produce not being supersized.

Higgins’s Wimpole Street home of oak-panelled study and gallery library is hand some enough, but rolls forward like a creaky Mary Celeste limping into harbour.

Meanwhile, painted flats of Covent Garden and a roll-in, roll-out Bow Bells boozer offer the fiscal economies of a touring show. But if the spectacle lacks a bit of wow, Okereke doesn’t.

She’s a loveable, squawking guttersnipe who spits fire and oozes sweetness. Most importantly, she can really hold a tune, smacking us about the chops with Just You Wait, and taking charge of her dipsy admirer Freddy (Sharif Afifi) in Show Me.

She carries off Eliza’s costume parade with panache, too; including a hat for the Ascot races that looks like a punch-up between two ostriches on a flying saucer.

Hadden-Paton’s Higgins (a much more youthful Prof than in most traditional productions) is a volatile cross between Harrison and John Cleese, with a nice touch of wounded schoolboy, when he realises he’s in love.

Sinclair’s Pickering is a more stable old stick who steadies himself with a glass of port. And Afifi’s posh-but-dim Freddy duly delivers a dulcet rendition of On The Street Where You Live. 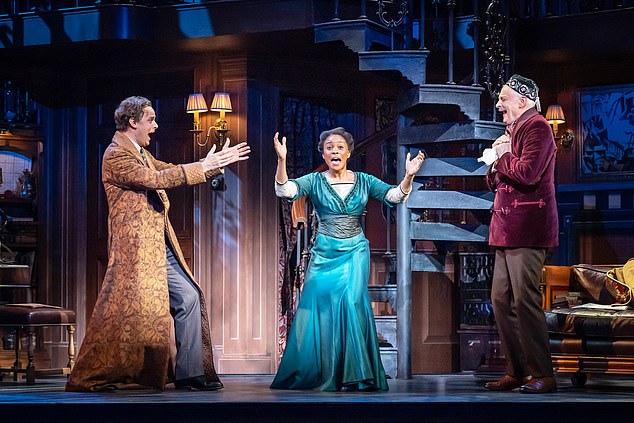 Amos’s boozy Alfred has the fine timing of a veteran comedian, but on the flip side, also dispatches his songs like a stand-up. Crucially, however, he’s fit enough for a gloriously bawdy can-can reel in Get Me To The Church On Time.

And as for Dame Vanessa, in the tiny role of Higgins’s Ma: when her long, frail form appears, wielding a crutch that matches her flowing velvets, there is an anxious in-take of breath from the audience.

Old pro as she is, though, she turns gasps to sighs, with a series of withering put-downs. Hadden-Paton and Sinclair’s broad double act sometimes feels like it’s aimed more at an American audience, trampling over Shaw’s subtle comic ironies like a herd of buffalo.

Thanks to sedate scene changes and a rather comfortable musical tempo, the show does feel like its full three hours. Acoustically, it’s a little echoey, too. But it still twinkles nicely, thanks to Okereke’s gem of a performance.