Daniel Silva shared a photo of a leopard he tattooed on YouTuber Corey La Barrie’s arm before he was charged for being allegedly behind the wheel at the time of an accident that killed Corey on his 25th birthday.

Daniel Silva, 27, is speaking out about late YouTuber Corey La Barrie after being charged with killing him in a car accident in Los Angeles on his 25th birthday last year. The tattoo artist shared an Instagram photo of Corey’s arm, which had a leopard tattooed on it, and revealed how “grateful” he is for the time he spent with him in the caption. He also admitted he wants to say a lot about the sad situation but is “limited.” 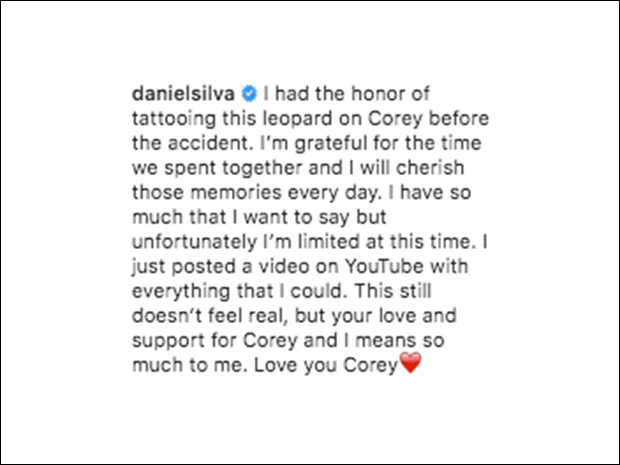 “I had the honor of tattooing this leopard on Corey before the accident. I’m grateful for the time we spent together and I will cherish those memories every day,” he wrote. “I have so much that I want to say but unfortunately I’m limited at this time. I just posted a video on YouTube with everything that I could. This still doesn’t feel real, but your love and support for Corey and I means so much to me. Love you Corey❤️”

In addition to the tattoo photo and caption, Daniel shared a video, which can be seen above, to his YouTube page about Corey and how he’s feeling. In it, he said he’s “sorry for all the pain everybody is going through” and apologized directly to Corey, his family, friends, and fans. He also said he realizes that his video “might not be good enough” for some people but went on to share memories of Corey and explained that he “cherishes every single moment [he] had with him.”

“I’ll think about him every single day for the rest of my life,’” he continued while also touching upon the second degree murder charge he’s facing after the accident. He said that Corey’s parents sent a letter to the judge in the case and asked that the second degree murder charge be brought down to manslaughter and thanked them for “recognizing that this was a tragic accident.”

Johnny Galecki and Girlfriend Alaina Meyer Are Having a Baby Boy — See the Big Reveal!