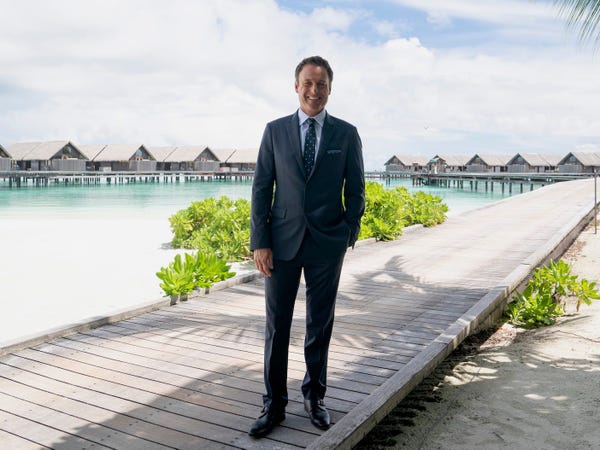 Since the very first episode of "The Bachelor," which premiered in March 2002, Chris Harrison has been a mainstay on our TV screens most Monday and Tuesday nights.

The host of the ABC reality show has been there for all of the franchise's most dramatic moments — and there have been many.

Harrison has also taken advantage of the unique one-of-a-kind experiences the show produces so well to set up unique dates for the Bachelor or Bachelorette — such as taking over the Chicago Cubs' Wrigley Field or the Red Rocks Park and Amphitheater.

But it was an episode of Jen Schefft's season of "The Bachelorette," which took him to the top of the Empire State Building at midnight, that he'll never forget.

"I got to sit up there by myself. I had the entire Empire State Building to myself," Harrison told Insider. "And it's just these moments where you have to pinch yourself and think, 'No tourist, no person in the world gets to do this.' It's pretty awesome."

But what exactly is Harrison doing behind-the-scenes when he's not dropping off roses or doling out advice to confused contestants?

Insider caught up with Harrison, who's promoting his new partnership with Kelley Blue Book, to find out.

"As a producer and host, I understand that my presence means something," Harrison said. "I kind of talk about myself as an entity. When I'm in a situation, I need to be there for a reason."

The host said he prefers to be featured in a scene to help contestants through this unique dating scenario.

"I'm there as a confidante. I'm there as a friend, maybe I'm there to stir things up or to push a situation I think needs to be pushed, and it's not flowing along as much as it needs to," he added.

"So it really depends," Harrison said. "I'm just very careful when and where I show up on the show."

'The Bachelor' franchise has taken Harrison around the world, and often times he takes advantage of those perks

If the show is going along smoothly and Harrison doesn't need to be on a date, he'll spend the day sightseeing instead, he revealed to Insider.

"I'll go find great restaurants or climb up the Eiffel Tower, I've done some amazing things," he said. "It's one of the benefits of being on this show and I try to really embrace where we are and take it in and go out with the locals and find these great spots.

Harrison said thanks to "The Bachelor" franchise he's been able to "go to games, go to sporting events, [and] play golf."

"A lot of the time, sadly, I'm just in the back of a hotel room or control room somewhere, watching and listening," he said. "It's a lot of boring, sitting around."

On the night that "Bachelor" star Colton Underwood famously jumped a fence and ran away from the show's crew in Portugal, Harrison had been watching his date with contestant Cassie Randolph for "hours and hours" before he chased after the former NFL hopeful.

"Even before Colton jumped the fence that night, I had been sitting in a cramped hotel room watching that entire date unfold, not knowing if I'd be needed at all," Harrison recalled. "And then, all of a sudden, it exploded."

"What you saw was the 1% of the iceberg that was exposed. What you didn't see was just a lot of not glamorous sitting in the back of a hotel room, eating a peanut butter and jelly sandwich."

"There's a lot of just waiting around," he added. "Because, a lot of the time, I'm there thinking something might happen and I'm not needed. But you sit there until 2, 3, 4 in the morning — just in case."

While Harrison has appeared less and less on-screen in recent seasons, the host promised "that will all change" this year.

It has been rumored for months that Crawley's season — which was all filmed at a Palm Springs resort due to coronavirus restrictions — will be so explosive that it may even feature a second "Bachelorette" lead.

While the series is filled with incredible getaways and one-of-a-kind dates, Harrison said the experience is 'not nearly as glamorous as it seems'

Before I root for @alabamahannah tonight on #TheBachelorette my heart is with these ladies @alexmorgan13 @kelleyohara and the @uswnt as they start their campaign to winning another #WorldCup today. just remember all I taught you. Good luck ladies, the world is watching and #BachelorNation is behind you #OneNationOneTeam

"You think dating 25 guys, dating 25 girls, that's not a big deal, but it really is. It's a crazy emotional thing," he added. "You get stripped down and get built back up as you're trying to find the man or woman of your dreams, and I think that's probably the thing that gets missed a lot because we make it look so pretty. We're traveling first class. We're in beautiful hotels, but what you don't see is the grind — and it's a grind."

David Beckham morphs into Rocketman and it's everything

Keith Urban, P!nk Drop New Duet ‘One Too Many’