Britney Spears is at the mercy of the courts and on Monday was denied a request to push forward with a motion to remove her father Jamie from her conservatorship.

The pop star pleaded with the court to move up a status hearing from September to a date sometime this month or at the very least, suspend her father until the hearing rolls around and a final determination is made – however, the motion was denied by the judge, according to TMZ.

The gossip outlet cited court documents it obtained about the unresounding “no” and while details about the decision were undisclosed, it is no secret that Spears’ current legal counsel, Mat Rosengart has been swift in action since taking over for Sam Ingham III and her camp recently laid out their argument for why Jamie remaining on as conservator is detrimental to her mental health.

On Thursday, Spears’ personal conservator, Jodi Montgomery, came out hot in a statement responding to Jamie’s claims to the court that she was fearful the “Toxic” singer was “spiraling out of control” and slammed Jamie for twisting up their conversations. 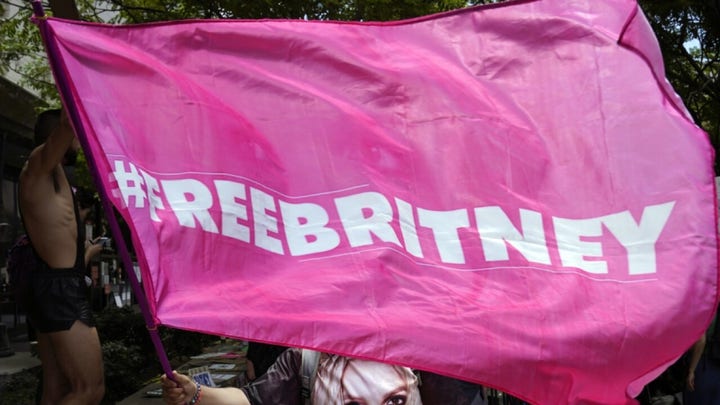 Britney Spears told the court in June that she wished to address the court about her reasons for ending the conservatorship and while Montgomery’s attorney noted that she did express that doing so could raise concern for Spears’ mental capacity, Montgomery never actually stated that Spears met the qualifications to be admitted for an involuntary hold.

“Although Ms. Montgomery might have signed routine paperwork for the facility, she did so only as Case Manager and only at the direction of Jamie Spears,” the statement claims. “In fact, the decision to place Britney Spears in a facility March 2019 was made by Ms. Spears’ treating psychiatrist at the time, Dr. Timothy Benson.”

A judge denied Britney Spears’ motion to remove her father, Jamie immediately as her conservator. A hearing on the decision is still set for September.
(Jeff Kravitz/FilmMagic)

Montgomery further stated again that she believes it is in Britney Spears’ best interests that Jamie step down as her conservator, “so he can go back to just being Ms. Spears’ father, and working on a healthy, supportive father-daughter relationship.”

“Lastly, Ms. Montgomery is saddened that her telephone call to Mr. Spears, made out of genuine concern for Ms. Spears, and intended to re-establish a working relationship with Mr. Spears towards Ms. Spears’ mental health and well-being, is now being misrepresented and manipulated to gain some sort of tactical advantage in the pending proceedings to remove him as Conservator.”