2020 was a nightmare by all accounts. Thankfully, 2021 has provided many of us with some much-needed relief: a new president, news of worldwide vaccinations, and plenty of mind-numbing new reality shows.

Perhaps the most polarizing of them all, Netflix’s Bling Empire explores the lives of a group of extremely wealthy friends in Beverly Hills, closely following in the footsteps of the hit movie Crazy Rich Asians. The cast, an assortment of good-looking models/influencers/entrepreneurs, are mostly funny and frustrating to watch, in the way most reality show stars are.

It all seems like fun escapist fare, that is, until we meet Andrew Gray—a former actual Power Ranger—who is introduced to us through his girlfriend Kelly Mi Li. During Episode 1, Kelly says that she and Andrew have a very “passionate” relationship, but when the couple escapes on a Paris getaway, we witness the toxicity that Andrew emanates for the first time.

“What the f*ck is going on?” he screams over the phone at Kelly over a meaningless disagreement. “Your lack of effort drives me f*cking crazy.” Kelly looks embarrassed. She later admits this isn’t the first time Andrew has lashed out this way or spoken to her this way.

Throughout the season, you witness this alarming pattern of behavior. In another episode, you witness him yelling at her because she openly discusses their relationship ups and downs with her friends. What he is trying to do is isolate her—which is something a lot of abusers tend to do. Abusers create tension between the victims’ friends and family, many times emphasizing “privacy” when, in reality, it’s just to keep victims away from their support system.

Toward the end of the season, we do experience a brief moment of reprieve when she ends the relationship with Andrew. She sees that the behavior and the way he is treating her is unacceptable. Kelly seems to stand firm in her decision and asks Andrew to move his things out of their apartment. 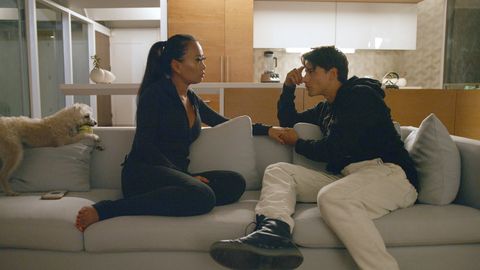 Then, the season ends with her in a gown walking up to a door, and who opens it? Andrew. Shirtless. I have been fallen victim to a douchebag with abs a time or two, but whatever is drawing Kelly back in is deep, and frankly, dangerous.

What stands out above all else is his behavior while cameras are rolling, only begging the question: What’s going on what we’re not seeing? You can only hope that Kelly has seen the show and the response and felt some sense of community that wants to lift her up and help her through this. Leaving an abusive relationship is not easy, but I think the online community Bling Empire has created will benefit her in the end.