Ryan Lochte is a talented swimmer who has brought more fans to the sport. According to his professional website, Lochte is a 12-time Olympic medalist. He also worked on a comeback after his actions outside the pool during the 2016 Olympics in Brazil.

Lochte was suspended from swimming events for 10 months after falsely claiming he was robbed during a night out at the 2016 Olympics in Brazil. The swimmer admitted later that he exaggerated the incident. According to CBS News, Lochte “acknowledged he was highly intoxicated, and his behavior led to the confrontation.” The consequences of the incident in Brazil went beyond Lochte’s suspension from swimming. He lost some of his most valuable sponsors, including Speedo and Ralph Lauren, per CBS News.

At the 2016 Olympics in Brazil, Lochte was a man whose life was out of control. At the 2021 Olympic trials in Omaha, Lochte is a happily married man with two children he adores. However, Lochte got some bad news about the 2021 Tokyo Olympics and you need to keep reading to find out.

Despite the bad news, Ryan Lochte's family is there for him 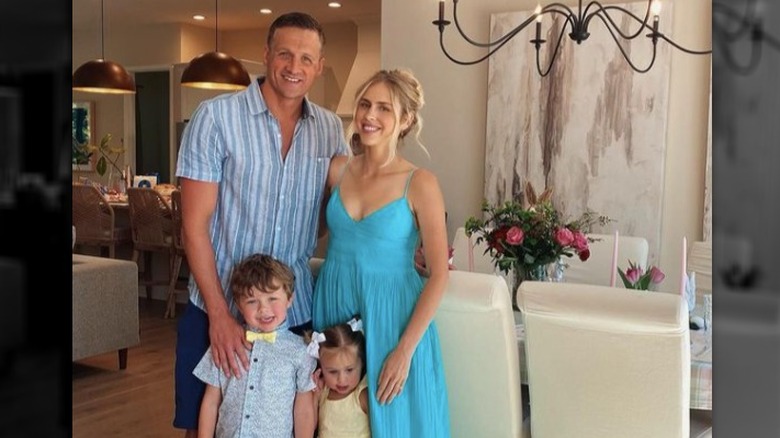 Ryan Lochte failed to qualify for the Tokyo Olympics. It is the first time Lochte has missed a Summer Games since 2004, per People. But the professional swimmer is now a husband and father, and his family is there to support him. ESPN reported that Lochte was the last one out of the pool at a June 2021 medley, but he cradled his daughter after his defeat. Lochte said, “I had my family there. My kids got to watch their daddy swim, so that means everything to me.”

People reported that the swimmer was emotional at the press conference, where he said, “I really wanted to be on that Olympic team. I think this is probably my most important swim meet I’ve ever had in my entire career, the one that meant the most to me.” The 12-time Olympic medalist said he felt like “he let everyone down.”

ESPN reported that even Michael Phelps, Lochte’s former rival, came down from the stands to hug him after his loss. Lochte told ESPN, “I still want to race, but as far as another Olympic trials, I don’t know about that. I’ll be [almost] 40. That’s pushing it.”

Jay-Z takes legal action against 'deepfakes' of his likeness