The former Bachelorette, 32, joked about reaching out to Nick Viall and Chris Soules on Monday, March 23, via her Instagram Stories. 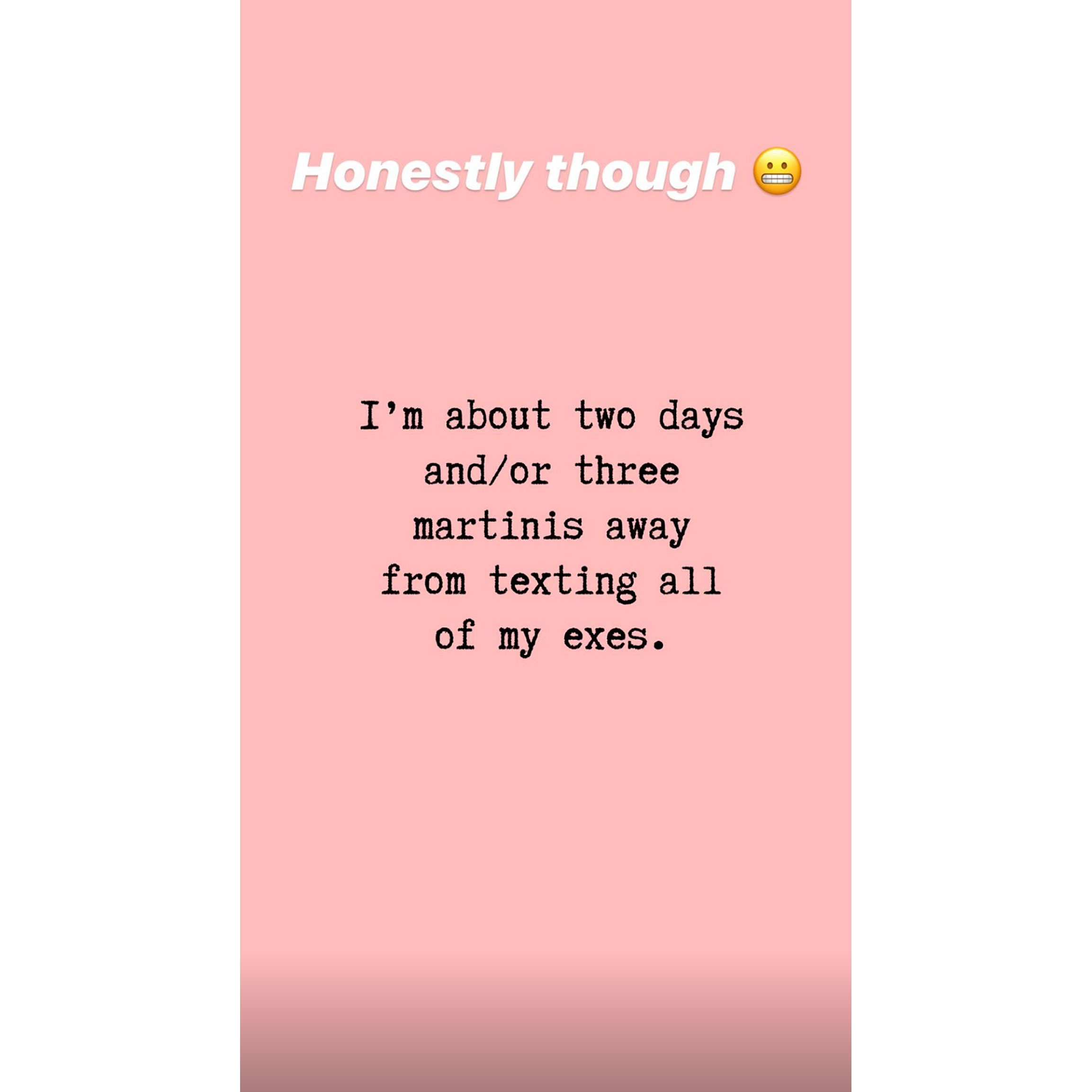 After sharing a photo of herself sipping on a martini from her New York City apartment, Dorfman posted a meme that read, “I’m about two days and/or three martinis away from texting all of my exes.”

She added, “Honestly though.”

Dorfman then shared a screenshot of a blank group text to Viall, 39, and Soules, 38. 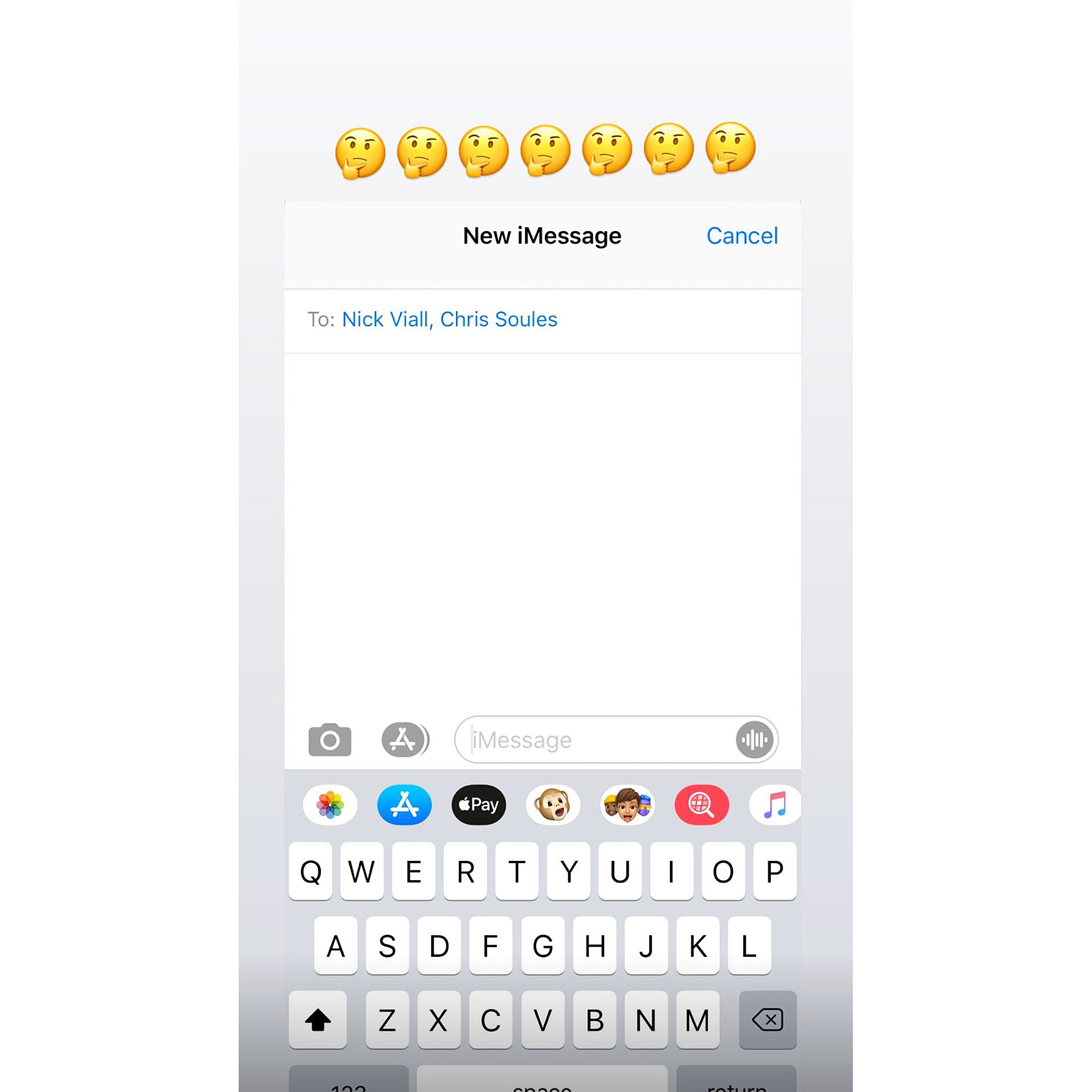 The “Viall Files” podcast host and the farmer both competed for the It’s Not Okay author’s heart on season 10 of The Bachelorette, finishing in second and third, respectively. Dorfman noticeably didn’t include her ex-fiancé Josh Murray, who won her season. Less than a year after they got engaged, the twosome had a nasty breakup, which she detailed in her 2016 memoir.

“I was trapped with someone who, in my opinion, often behaved like an emotional abuser,” she wrote. “If I talked to another man, I was a ‘whore.’ If I disagree, I was ‘argumentative.’ If I defied him, I was a ‘bitch.’” (Murray, 35, has denied all of Dorfman’s claims against him.)

Dorfman is, however, on good terms with Viall. The former Bachelor even shared the Single State of Mind author’s fake text on Monday via his Instagram Stories, adding a thinking emoji. Days before Dorfman’s post, Viall actually reflected on his time on on the dating series during an Instagram Live with Chris Harrison, who is talking to ABC execs about streaming old seasons of the show amid the coronavirus pandemic.

“If you’re gonna air any of my seasons, can it be like Bachelor in Paradise or The Bachelor?” Viall asked on Thursday, March 19. “Maybe, Kaitlyn’s was a good season, I’m fine with that, but can we just skip Andi’s season altogether?”

Viall, who appeared on Kaitlyn Bristowe’s season 11 of The Bachelorette, Bachelor in Paradise season 3 and was the lead on season 21 of The Bachelor, made headlines when he asked Dorfman why she “made love” to him when he wasn’t “in love with him” during the live After the Final Rose special in 2014.

“Though it would be kind of fascinating given, like, you know, different times right?” Viall told Harrison. “Five years ago and now we have the windmill, and back then it was like, it probably wouldn’t be that big of a deal now, that’s for sure. But I would rather just ignore Andi’s season altogether. I’m all for playing the Nick Viall marathon. But you have to tell the whole story. You can’t just air Andi’s season and just leave it.”

Given the constantly evolving nature of COVID-19, Us Weekly wants our readers to have access to the most accurate resources. For the most up-to-date coronavirus information, guidance and support, consult the CDC, WHO and information from local public health officials. If you’re experiencing coronavirus symptoms, call your primary care provider for medical advice.

Brad Pitt, 56, Recalls His Very First Kiss: ‘The Anticipation Was A Bit Nerve-Wracking’