Amber Heard appeared to shudder as she came face-to-face with Johnny Depp after leaving the stand.

The 36-year-old sobbed through her testimony on Thursday, in which she alleged that her ex-husband penetrated her with a bottle during a tense argument, and threatened to kill her.

She also claimed that the 58-year-old kicked her in the back while on a private plane, surrounded by friends and staff.

New video footage has emerged of the moment she walked off the stand at the end of the emotional court session yesterday, with Depp walking towards her.

In the brief clip, the Pirates of the Caribbean actor got up to leave the Fairfax County Courthouse, with his exit route bringing him in her path.

Heard seemed to recoil as she noticed him, while court officials put their hands up to Depp and ushered him away. 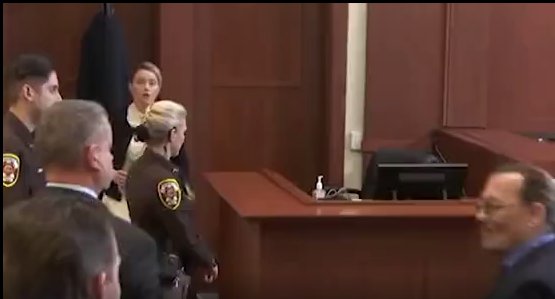 He then seemingly looked in her direction before turning away and shrugging while he walked in a different direction.

Shortly before the run-in, Heard broke down in tears as she recalled an argument during their trip to Australia, in 2015, in which Depp allegedly sexually assaulted her with a bottle.

She told the court that the Edward Scissorhands star smashed glass bottles at the property they were staying at, and threatened to ‘carve up’ her face.

Describing the alleged incident, she said that she ended up on a countertop after a struggle, with her ex on top of her.

‘The next thing I remember I was bent over backwards over the bar, my back was on the countertop and I thought he was punching me. I felt this pressure on my pubic bone, and I could see his arm moving, and it looked like he was punching me.

‘I didn’t feel pain, just this pressure on my pubic bone. I don’t remember what I said, I just remember being really still and not wanting to move. Looking around the room and looking at all the broken bottles and broken glass…

Heard claimed that he kept repeating the phrase, ‘I will f**king kill you,’ during the argument.

When asked if there was any penetration of her vagina during the alleged incident, she added: ‘Johnny had the bottle inside of me and was shoving [it] inside of me over and over again.’

Following her bombshell testimony, Depp’s spokesperson released a statement, describing her time on the stand as ‘the performance of her life’.

‘As Mr Depp’s counsel correctly predicted in their opening statements last month, Ms Heard did indeed deliver “the performance of her life” in her direct examination,’ they said.

‘While Ms Heard’s stories have continued to grow new and convenient details, Mr Depp’s recollections have remained exactly the same throughout the six painful years since her first allegations were made.

‘His truth – the truth – is the same no matter the environment in which it has been presented.

‘The upcoming cross examination from Mr Depp’s team will be most telling, and will certainly highlight the many fallacies Ms Heard has now attempted to pass off as fact throughout her convoluted testimony.’

A spokesperson for Heard responded: ‘As evidenced by the statement just released, Mr Depp’s defamation claim is falling apart so rapidly that his counsel are turning from prosecutor to persecutor.

‘They boast that Mr Depp’s story has not changed. If so, since he lost the Domestic Violence Restraining Order and he resoundingly lost the libel case in the UK, perhaps he should consider a new strategy rather than the recycled approach of attacking the victim, and refusing to take responsibility for his own conduct.

‘Mr Depp’s behavior in this trial has been as pitiful as it was in their marriage.

‘Apparently, they feel they must double-down on their demonstrably losing two-part strategy: distract the jury and demonize the victim.’

Depp is suing his ex-wife for libel and seeking $50million (£39m) in damages, following an op-ed she wrote for the Washington Post, discussing being a victim of domestic abuse.

While she did not name him in the 2018 piece, his team have argued that it implies he was sexually and physically violent towards him during their marriage – allegations he has denied.