Jennifer Love Hewitt would like fans of season 5 of 9-1-1 to know that she’s sorry — but not because Maddie still hasn’t returned to the Fox drama yet.

It all began on November 10 when Jennifer was enjoying some downtime watching TikToks. As she explained, the 42-year-old mother of three came across a video of a man explaining the “real” meaning behind the folded hands emoji, also known as “🙏.”

“Guys, I can’t even talk about what I’ve just recently learned,” she began to explain on her Instagram Stories. “I thought that the hands that are together in the emoji section of the phone, I thought those were prayer hands. I have, for a very long time, been sending those to people when I pray for them, when I pray for their family members or their situations, particularly during COVID. Praying, sending goodness, love, light.” 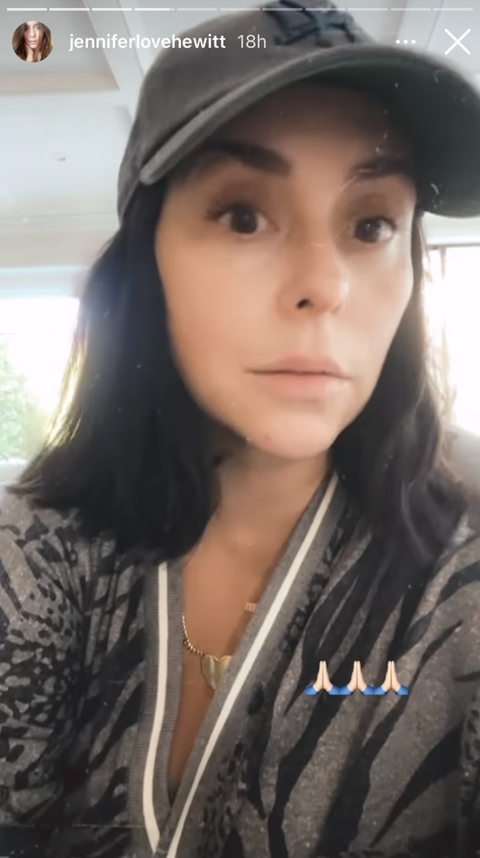 But according to a certain TikTok, the emoji is supposed to be showing two people high-fiving in celebration. And so, thinking she’s been using the emoji all wrong, she issued a heartfelt apology to her fans.

Jennifer continued: “I did not know and so, this is a public apology to all the people that I have sent what I thought were praying hands to, to say I’m with you. I’m praying for you and your loved ones or your friends or your family or for all of us, sending goodness and all of that, and I have actually been high-fiving you the whole time. I’m so sorry. I’m 195 years old. I didn’t know!”

While the Texas native didn’t specify which TikTok she watched, a quick search on the social media app reveals that she’s not the only one who recently found out this info. That said, outlets like Dictionary.com argue that the emoji, better known as the folded hands emoji, “represents an array of abstract and concrete concepts” like “hopefulness, asking for something” and even a high five.

At the end of her Instagram Stories, Jennifer was still searching for answers. “Where are the praying hands? Are there praying hands? Because I would like to be able to go back to sending those.”

Given that there can be many meanings behind the emoji, we say keep doing your thing, Jennifer!