Why Father Brown’s creator was no saint: G. K. Chesterton’s work was marred by anti-Semitism, he thought giving votes to women was the worst thing for Britain and he wasn’t alarmed by the rise of Hitler, says author

The Sins Of G.K. Chesterton

G. K. Chesterton was a big man, weighing 20 st and standing 6ft 2in in his cotton socks. P. G. Wodehouse said the loudest noise imaginable would be ‘G. K. Chesterton falling on a sheet of tin’.

In his heyday as famous as George Bernard Shaw, Chesterton was a journalist who regularly churned out circumlocutionary and breezy articles about, say, kippers, front gardens, cricket, cooked breakfasts, military virtues and the joys of beer.

He was rather in love with his clever-cleverness, laughed out loud at his own jokes, dressed in a cloak and a broad-brimmed hat, and carried a swordstick — seldom needed in his home town of Beaconsfield.

He hailed taxis to ferry him a few yards and was always getting lost. ‘Am in Market Harborough. Where should I be?’ he urgently telegraphed his wife, Frances Blogg, upon whom he totally depended.

Richard Ingrams tells us Chesterton would sometimes deliver his copy to the printer inscribed on a roll of wallpaper — and that he was phobic about jelly: ‘I don’t like a food that’s afraid of me.’ 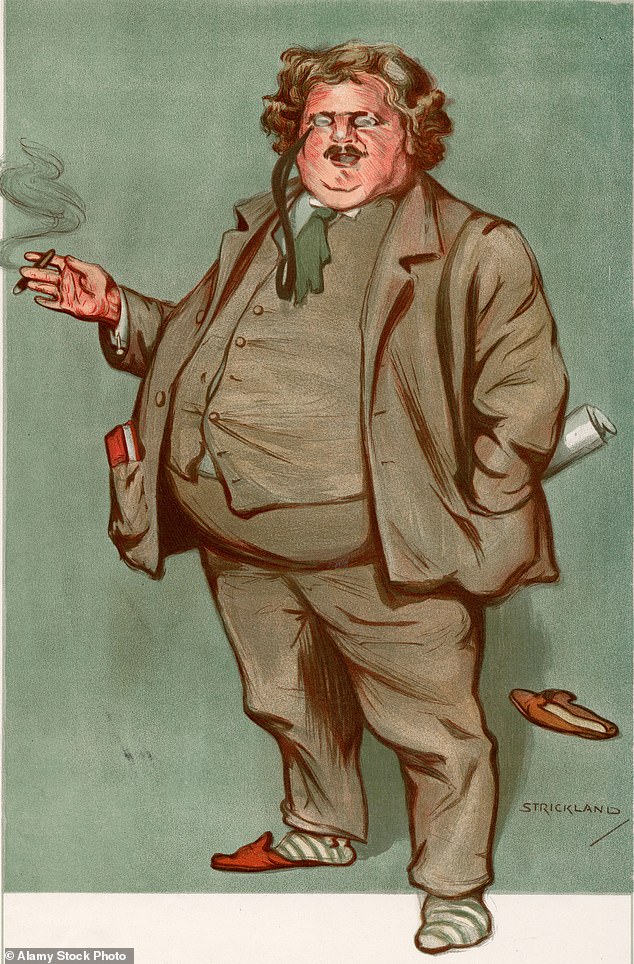 G. K. Chesterton (pictured) was a big man, weighing 20 st and standing 6ft 2in in his cotton socks. P. G. Wodehouse said the loudest noise imaginable would be ‘G. K. Chesterton falling on a sheet of tin’

For all these reasons, previous biographers have dubbed Chesterton ‘a serene, unworldly and benevolent figure, leading a blameless life’ — indeed, moves have been made by admirers to have him canonised by the Pope, such was his mission to promote Roman Catholicism.

Ingrams begs to differ, arguing that after 1902, when he met Hilaire Belloc, Chesterton’s work was marred by anti-Semitism.

Belloc does sound a nasty creature. It was his belief that the Press in England and America was controlled by Jewish millionaires who also had a monopoly of the fruit trade and the tobacco industry. ‘The whole of English life is interwoven with Jewry,’ fulminated Belloc. ‘Our leading families are intermarried into it . . .’

Chesterton, says Ingrams, went along with ‘this nonsense’, egged on by his horrible-sounding brother, Cecil, five years his junior, who was known for a ‘fanatical intolerance’ including ‘violent anti-Semitism’.

Ingrams tells us Chesterton’s ‘devotion to Cecil was an obsession’.

He deferred to Cecil’s opinions, and soon abandoned his popular journalism to pontificate about politics.

‘Chesterton’, says Ingrams, ‘moved into the realm of lunacy.’ He cites an essay where Chesterton, alluding to Jews, thunders that ‘Men in England are ruled, at this minute, by brutes who refuse them bread, by liars who refuse them news, and by fools who cannot govern, and therefore wish to enslave’.

In an open letter, Chesterton mentioned how Cecil ‘found death in the trenches’. Ingrams has examined this claim and discovered Cecil was never in the trenches of World War I.

He was not even in the Army, having been rejected for varicose veins. He died of natural causes, chronic nephritis, after the Armistice had been declared.

Such was Chesterton’s need to consider his brother a ‘mythical hero’, however, this truth was never faced. Indeed, Chesterton was cracking up. 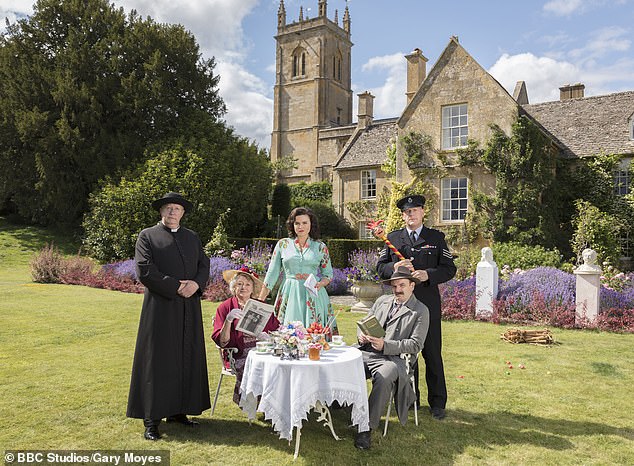 Because of his ingenious philosophical Father Brown detective stories, often adapted for television (pictured), Chesterton is not a forgotten author

He took to his bed, which broke under his great weight. He went to Italy and met Mussolini. ‘Chesterton did not speak Italian and Mussolini didn’t speak English,’ so that didn’t get very far.

He supported the notion that giving votes to women was the worst thing for Britain. He wasn’t alarmed by the rise of Hitler, seeing him as one of those ‘very earnest little men who go to vegetarian restaurants’.

Though Chesterton died in 1936, ignorant of the Holocaust to come, the outcome of anti-Semitism in the 1920s and 1930s, says Ingrams, is that it ‘helped to promote a conception of Jews as foreigners and aliens, thus fostering in Britain a more tolerant attitude to Nazi barbarities than might otherwise have prevailed’.

Because of his ingenious philosophical Father Brown detective stories, often adapted for television, Chesterton is not a forgotten author.

Brown, erroneously believed to be an irrelevant, faintly comic character, ‘but who proves to be, in reality, a profound and serious figure with an intuitive insight,’ especially into human frailty and wickedness, was once seen as Chesterton’s idealised self-image.

In fact, the description perfectly fits Richard Ingrams, the greatest journalist of my lifetime, co-founder and second editor of Private Eye and founder of The Oldie.

Winds of Winter release date: Will the book ever be released? George RR Martin opens up