CONFIRMATION BIAS
Inside Washington’s War Over the Supreme Court, From Scalia’s Death to Justice Kavanaugh
By Carl Hulse

On Feb. 12, 2016, Justice Antonin Scalia died of a heart attack at a remote luxury resort in West Texas. The Republican Senate leader, Mitch McConnell, wasted no time declaring that his party would not allow President Obama to fill the Supreme Court vacancy. McConnell did pause for a moment to mourn Scalia, who had been a friend, but his “second thought,” he told Carl Hulse, “was to immediately turn to the politics of this situation. The first thing that came into my mind was that I knew if the shoe was on the other foot, they wouldn’t fill this vacancy. I knew it for sure.” “‘They,’ of course, meant the Democrats,” Hulse writes in “Confirmation Bias.”

There were still more than 340 days left in Obama’s term, plenty of time for confirmation hearings, but the Republican senators wouldn’t even talk to Obama’s nominee, the thoroughly worthy and decent Merrick Garland. Democrats loudly protested, portraying McConnell as “the obstructionist in chief.” (McConnell “happily embraced his image as the dark lord of the Senate,” Hulse notes, and covered a wall of his office with prints of editorial cartoons “saying all sorts of nasty things about him.”) But the Democrats were hardly in a position to complain. 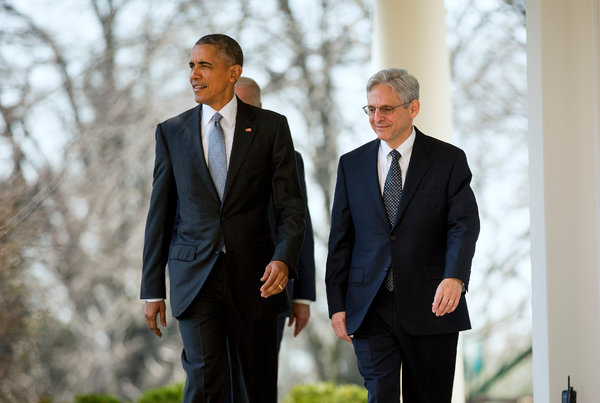 In 2003, the Democratic Senate leader, Harry Reid, had led the first-ever successful filibuster of a nominee to the federal court of appeals, Miguel Estrada. Then, in 2013, when the Republicans played tit-for-tat and began holding up Democratic nominees to the federal courts in the Obama administration, Reid “went nuclear,” in Senate parlance, engineering an end to the filibuster in judicial nominations — a move that left lingering “bitterness,” Hulse says.

The ornery Reid was no less cynical than his counterpart McConnell. “Blatant hypocrisy,” Hulse declares in this entertaining and shrewd book, is a “defining characteristic” of the United States Senate, certainly in the 21st century. Hulse says that “with control of the Senate frequently shifting between the parties, senators had to master the art of the 180-degree turn, instantly adopting the language and tactics of the opposition party as soon as they exchanged places.”

Shamelessness paid off for the Republicans. McConnell boasted that by preserving an open seat on the Supreme Court, he helped elect Trump president, and Hulse offers polling data to back up this claim. President Trump gloated over the opportunity to stock the rest of the federal bench with conservatives. “You know, when I got in, we had over 100 federal judges that weren’t appointed,” Trump declared to a crowd in March 2018. “Now I don’t know why Obama left that. It was like a big, beautiful present to all of us. Why the hell did he leave that? Maybe he got complacent.” Actually, Obama left so many judgeships unfilled because the Republicans were able to obstruct and delay.

The Trump administration would not let the same thing happen. Hulse colorfully describes Trump’s all-out assault. His chief strategist was the White House counsel Don McGahn, “an unusual mix of conventional Washington Republican and former longhaired radical libertarian who was an excellent guitar player in a beach bar cover band on the side,” Hulse writes. He was also a steamroller. A member of the conservative Federalist Society, he was bent on “deconstructing the administrative state,” i.e., appointing federal judges who would knock down regulations on business.

He set about this with a single-minded zeal that would have made James Madison blanch. “Previous administrations reviewed and picked judges via judicial recommendation committees, exhaustive review and consultation with the Justice Department,” Hulse says. With Trump’s backing, McGahn “wanted to dispense with all that,” and by and large he was able to, thanks to a compliant Republican Senate leadership. Gone were quaint customs like the “blue slip,” which entitled home-state senators to record their approval or rejection of a judicial nomination. Well into Trump’s term, the president had appointed 30 federal appellate judges (about one-sixth of the total) and 53 lower court judges, as well as a Supreme Court justice — Neil Gorsuch, who filled Scalia’s vacant seat.

At the same time, McGahn could be subtle. He signaled to Justice Anthony Kennedy, who was nearly 82 years old, that if he stepped down, Trump would replace him with a former Kennedy clerk, Brett Kavanaugh. Kennedy may have been anxious about Trump’s somewhat highhanded view of the judiciary, but McGahn knew that Kennedy had a vain side. Gorsuch had also clerked for Kennedy at the Supreme Court.

The message from the White House was: “‘Look, we like people that you like, we like judges that you think are capable and worthy successors.’ Kennedy even swore in Gorsuch, making him the first former Supreme Court clerk to serve alongside his former boss,” Hulse tells us. “Kennedy wanted to see himself succeeded by one of his own clerks, a first in Supreme Court history.” In Kavanaugh, Kennedy got his wish. Trump was delighted with the power play games of his White House counsel. “We need more Republicans in 2018 and must ALWAYS hold the Supreme Court,” the president tweeted in the run-up to the midterm elections.

Hulse, the chief Washington correspondent for The New York Times, is not a knee-jerk Trump critic. He actually credits Trump with “cutting through much of the high-minded malarkey about the neutrality of judges with a single tweet.” It is true that Supreme Court justices like to claim to be objective and nonpartisan, with ritual disclaimers in their confirmation hearings that they do not make law but merely interpret and apply it. This posturing is routinely undercut when justices predictably split along ideological lines on big cases involving hot-button social issues like abortion and affirmative action.

Still, as Hulse points out, there is a reason judges go to great lengths to appear impartial and neutral (and, of course, some truly try to be). The legitimacy of the court depends on a public perception that the justices are fair-minded referees in the political battles that break out between branches of government (Exhibit A: the constitutional crisis now erupting over enforcement of congressional subpoenas on the Trump administration). Democracy depends on customs and norms as well as written rules; civility and comity as well as up-or-down votes. Trashing the time-honored process for nominating and confirming justices can have unintended consequences.

Power can cut both ways. If and when the Democrats gain control, they will undoubtedly use the “nuclear solution” to ram a big-government liberal agenda through the Senate. In personnel as well as policy, the rule is live by the sword, die by the sword: The all-powerful Don McGahn was sacked by Trump for disloyalty when he evaded the president’s apparent bidding to obstruct justice. As a longtime Washington correspondent, Hulse is an expert guide through the machinations on Capitol Hill. He does not offer any revelations about Kavanaugh, searingly accused of sexual assault as a high school student. But he offers a telling scene of McGahn coaching Kavanaugh to push back, hard, against his congressional inquisitors. The tactic worked; Kavanaugh survived. But the spectacle was unedifying and, possibly, a harbinger of worse to come.

Idris Elba is writing a book collection inspired by his daughter