NOW WE SHALL BE ENTIRELY FREE
By Andrew Miller

Over the years, a number of people, me included, have compared the British author Andrew Miller to Hilary Mantel. Though much less well-known, he is a very stylish, almost painterly writer, and he has her gift for historical reconstruction, for describing the past without making it seem like a wax museum. In some of his best books — like “Ingenious Pain,” his first, about an 18th-century doctor, and the more recent “Pure,” about an engineer in pre-revolutionary France trying to clean up an ancient cemetery — he brings off the Mantel trick of plunging you so deeply into the past that before long you take it completely for granted.

Miller’s new novel, “Now We Shall Be Entirely Free,” seems bent on defying convention and expectations, and deploys the Mantel magic only intermittently. Like most of his books, it’s set in the past — in the early 19th century, in this case, when John Lacroix, a British Army officer and veteran of the Peninsular War between England and France, is deposited, half-dead, at his estate in Somerset. But what begins as if it might be a full-immersion historical novel (in the manner, say, of Bernard Cornwell’s Sharpe series, also set during that war) quickly becomes instead a psychological mystery. Lacroix, once he recovers, proves to be half-deaf and broken in spirit, suffering from what we would now call PTSD. Instead of rejoining his regiment, he decides, for reasons that are as unclear to him as they are to the reader, to travel to the Scottish islands, where he has never been.

Though he doesn’t learn it until quite late in the book, Lacroix is being pursued. While fighting in Spain, it eventually becomes apparent, he was witness to a My Lai-like massacre carried out by frightened, starving British troops against the small Spanish village of Morales. The Spanish authorities raise a fuss, and the British high command, needing a scapegoat to appease their allies against Bonaparte, dispatch a vicious corporal named Calley (no coincidence, surely) to quietly eliminate Lacroix. A Spaniard is sent with him, just to make certain the job is done right.

Much of the book alternates, in thriller-like fashion, between these hunters and their fugitive, who a couple of times unknowingly come within inches of one another. Both the Hebridean setting and the idea of an innocent man being chased by people he doesn’t know may even remind readers of “The Thirty-Nine Steps,” John Buchan’s classic adventure novel. But until the end much of the cat-and-mouse suspense in “Now We Shall Be Entirely Free” is unwound and undercut — deliberately, it would seem — by the plot’s way of going off on tangents and detours. At one point, for example, Calley comes upon a textile mill, a pile of satanic brick and chimneys, and the story pauses while he reveals that as a boy he worked in just such a place, “14 hours a day. … 16 when business was brisk,” and explains to his companion about “the creeler, the gaffer, the carding room. The winding stroke. Doffing and piercing.” He remembers 9-year-old Lizzie Bentley, from Southwark, who one day caught her hand in a belt and had her arm ripped off at the shoulder. “The blood was like water spun from a twirl mop.” 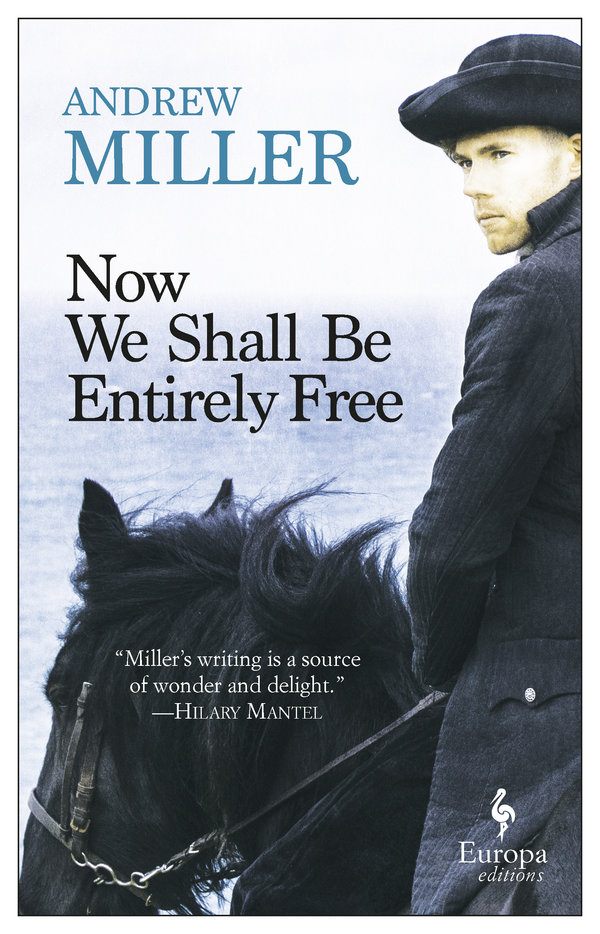 Another time, they come upon a group of men bathing naked in a river. Calley’s companion quickly strips and joins them, splashing around and swimming in circles. Afterward they drink brandy, smoke, tell stories. Calley rolls up his trousers but doesn’t go in above his knees. “All wankers,” he says, “every one of them,” employing a word that surely won’t be used this way for another hundred years.

Lacroix, meanwhile, gets mugged, spends some time in delirium and, in an almost slapstick scene, comes ashore on a small Scottish island on the back of a cow. There he falls in with the Frends, a hippieish clan of vegetarian free spirits led by Cornelius Frend, who don’t believe in marriage, religion or war and smoke something called bang — a 19th-century version of dope, apparently — while digging for artifacts in a peat bog. They seem to be in thrall to a mysterious character named Thorpe, and, like those experimental communities bankrolled by Robert Owen, they’re funded, skimpily, by a rich copper smelter from Swansea.

Lacroix falls in love with one of the Frends, Emily, whose eyesight is as bad as his hearing. She’s going blind from what seems to be glaucoma, and they travel to Glasgow in search of medical help. There, with Lacroix at one point unwittingly sharing a bed with Calley’s companion, the suspense story turns into a romance of sorts, the most predictable part of the novel, though Miller does his best to enliven it with some fascinating medical scenes. Emily and Lacroix have the good fortune to come across a doctor who not only can operate on her eyes, with a scalpel as fine as a needle, but also believes in washing his hands. Eventually, in a long monologue, Lacroix reveals his secret, which is pretty much what we imagined, and Emily decides it doesn’t matter. In perhaps the book’s strangest moment, neither seems much affected by the morally troublesome.

The book’s relation to history is more complicated than in Miller’s other novels. At times he suggests that the past and the present greatly resemble each other. There’s the My Lai-Morales parallel, for example, and the stoner cultism of the Frends. At other times he’s at pains to point out how backward they were in the early 19th century. People don’t know about germs yet; they think the world can’t be older than 75,000 years. In Glasgow, Lacroix is astonished by what he eventually decides must be gaslights, and later he tries to imagine the world in 60 more years. What would you see? “Gas, steam ships. Electrical this and that. A sky full of air balloons. Balloons driven by steam? Why not?”

Even more often, Miller emphasizes not so much the pastness of the past as its strangeness, dwelling on details remarkable just for their oddity: Three giants in a yard, stripped to the waist, their skin dyed blue. A man skiing in mud. Someone who seems to be wearing birds on his feet. A storyteller, a black man, who wears on his head the model of a ship. Lacroix’s surroundings at times appear solid to him; at others, especially when he has been drinking or taking laudanum, they’re ghostly and insubstantial. A subtheme of this novel, where one of the main characters can’t see and the other can’t hear, is unknowability, how hard it is to make sense of the world. “Even the most sensible people have an edge of lunacy to them,” Lacroix thinks at one point, “like fat on a cutlet.”

In its formal slipperiness, first one kind of book, then another, “Now We Shall Be Entirely Free” seems to be making the same point: that things are never quite what you expect, and history is altogether stranger than most accounts suggest. What makes Miller’s own account so riveting is its alertness to wonder and unpredictability.

Charles McGrath is a former editor of the Book Review.

NOW WE SHALL BE ENTIRELY FREE
By Andrew Miller
410 pp. Europa Editions. Paper, $19.

One True King: Preview the last School for Good and Evil book