FIRST STEPS
How Upright Walking Made Us Human
By Jeremy DeSilva

Walking: We marvel when other animals get up on their hind legs and do it, applaud our children when they master it, but most of the time blithely ignore how remarkable a feat it really is. Yet moving bipedally (on two legs) has proved fiendishly tricky to explain from an evolutionary perspective. Enter “First Steps,” by the paleoanthropologist Jeremy DeSilva, a book that strides confidently across this complex terrain, laying out what we know about how walking works, who started doing it and when.

DeSilva proposes that our bipedalism is at the root of our uniqueness as a species, and the book is carefully structured, neatly braiding his own research with the wider narrative and history of human evolution.

One chapter opens, for example, with a vista of wind-whistled acacia trees at Laetoli, Tanzania, a landscape famed for its preserved trails of animal and hominin footprints made some 3.66 million years ago. But before going back in time to fully explore this scene of desolation — a group of australopithecines squelching their way through soggy volcanic ash — he sets the scene in 2019, with a little girl and her thorn-spiked foot. DeSilva’s team encounters her while discovering new tracks, and uses the gory account — featuring “an ungodly amount of pus” — to help us consider the vulnerability as well as the benefits of being bipedal creatures. 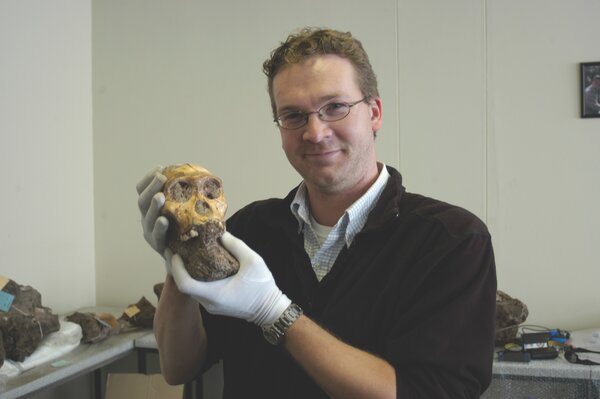 So “First Steps” isn’t just a big-picture chronicle. It’s full of very human, intimate details, in the past and present. Again at Laetoli, DeSilva analyzes the tracks of a smaller australopithecine individual — likely female — who seemed to have walked oddly, and in one of his fictionalized scenes, imagines that she too was nursing a foot that had been impaled by a thorn.

There are other echoes of feet, walking and serendipitous paths threaded through the book. In 1978, Mary Leakey, the doyenne of paleoanthropology, broke her ankle and it prevented her from seeing the first hominin footprints at Laetoli. Four decades later in South Africa, the researcher Lee Berger’s 9-year-old son literally stumbled across the weird flat-footed Australopithecus sediba while following his dog. And four years after that, the oldest stone tools in the world were discovered when a wrong turn was taken off a Kenyan trail. Known as the Lomekwian, those archaic objects bring us back to a consideration of Laetoli, which is just 300,000 years older; a blink of a geologist’s eye. It’s entirely possible those mud-trudging hominins may already have been using their hands — freed by walking upright — to make tools.

Despite “First Steps” being loaded with absorbing information, for the most part it’s highly accessible. A few bits of jargon pop up, while other phrasing may be too informal; even allowing for some creative license, hearing an australopithecine complain that “yesterday was hell” may feel incongruous to some.

Another issue is that, as with many books by scientists, the customs of academic citation demand naming colleagues and institutions, a great number of them. While laudable for its transparency, this can make for heavy going (though it also demonstrates that modern science is fundamentally collaborative). Perhaps swapping name-dropping for some of the fascinating details hidden in the voluminous endnotes might have been worthwhile.

Yet these criticisms are minor. DeSilva is a genial companion on this stroll through the deep origins of walking. Sometimes we amble along listening to fieldwork yarns, other times the way is steeper, requiring more concentration to absorb complex ideas. But always the view from the top is illuminating. Next time you crest a rise, take a moment to look down at your legs and ponder what it really took to get you there.

In Lauren Groff’s New Novel, Nothing — and Everything — Is Sacred

The Secret Code That Threatened Nazi Fantasies of Racial Purity