Property damage, midnight cement mixing, secret meetings with rogue public officials: in her new book, an Australian environmental protester has described the surreal experience of doing what she felt was right, only to find herself on the wrong side of the law.

As debate rages in Parliament over a bill to remove the historic 'Roe 8' road classification from Perth's Beeliar Wetlands, West Australian writer Nandi Chinna has taken readers behind the scenes of the protests on the eve of the state's 2017 election that won the wetlands' eleventh-hour reprieve and stopped the clearing for the road.

Chinna, who has published four previous poetry collections and whose doctorate research documented lost wetlands, has just launched The Future Keepers, describing how ordinary people risked injury, confrontation and criminal charges as they wrecked fencing, chained themselves to trees and faced off with police horses; and how public servants risked getting the sack, to support the protesters.

The protesters sought to stop a highway being built through one of Perth’s last remaining large urban wetlands. Credit:Billy Amesz

It describes the lead-up: years of attempts to toe the line and work within approved Environmental Protection Authority and Supreme Court channels, and the eventual failure of these attempts leading to the last resort of physical protesting. One of the biggest Perth has witnessed, at its peak huge police teams were on site daily, protecting machinery the outgoing government rushed into action before election day.

Chinna's poems flicker through images like a film: of official meetings at the EPA offices, conservationists and public officers poring over a 368-page report full of tea-stained maps; of clandestine meetings in anonymous cafes, where government workers against Roe 8, but afraid of losing their jobs, used cafe detritus – napkins, salt, sugar and water bottles – to demonstrate the scientific principles that would bolster the protesters’ arguments.

“How alienating it is to talk about nature in those terms, to have these graphs and statistics and offsets … if we take this we will give you something else,” Chinna told WAtoday following the launch of her book.

“They can measure the species, the flora, the fauna, hydrology, geology, but they don’t mention things like the experience and reality of it, the wonder and beauty, the extraordinary.

“To go through all these supposedly protective channels … then to find that there is no protection.”

Chinna reveals, after all else failed, the dislocation of being an everyday citizen – a longtime community volunteer, who saw herself as a good and law-abiding person – suddenly undertaking acts of civil disobedience in an increasingly hostile conflict that saw numerous injuries, arrests and charges laid. 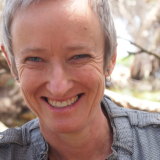 Anxiety rises from the pages like steam as Chinna describes damaging fences by night, the local hardware store running out of spanners as the contractors repaired the boundaries daily.

So many older women took part that they had to cover their silver hair so it would not shine in the moonlight as they wielded their spoons – not over mixing bowls of biscuit batter, like good grandmothers, but over buckets of cement to be poured into the holes of the fence posts.

They recorded licence plates of utes driving in and out, even followed them, in their efforts to document gaps in the wildlife trapping process; and they donned armguards, thumbcuffs and even nappies, preparing not for admittance to a nursing home, but to trespass barriers and spend long nights chained to trees.

One passage shows protesters trying to stop the movement of a drilling rig, a mounted police contingent forming a line to drive back the people who tried to hold their ground.

“A friend held my hand, and they kept coming and came straight into us and knocking us out of the way with their horses,” Chinna said.

“We were stumbling and falling as this line of police and horses just kept pushing.

“We were just a bunch of people; of all ages, old ladies, older men and women and all sorts of people there just standing in the road. 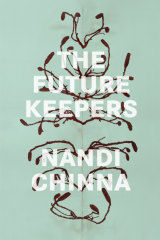 The Future Keepers is out now. Credit:Fremantle Press

“But … that was the only way we were going to stop this thing. We didn’t enjoy it. I don’t think the police enjoyed having to be there. But at the same time we felt that we had no choice.”

Meanwhile, government and media commentary painted them as ‘dole-bludging scum’, she said.

One morning, she stopped by the blockade about 7am on her way to work, and stood there with an elderly woman.

“People would do that; before work, or after, or some would get the day off work if they needed to,” she said. “Someone drove past and honked and yelled, ‘get a job, you bastards’. This lady turned to me and said, ‘I am a retired teacher. I am 80 years old. What do they expect me to do?’

“We were all sorts of people just asking the government for better solutions for transport. I know there’s been talk about putting Roe 8 back on the agenda and it seems to be the battle that is never won; but really I think people should learn from what happened in that suburb: that the community really won’t put up with this anymore.

“We want progressive solutions … to retain green spaces … not just ovals; places other species can live in. To have our shops and goods and transport and retain our natural systems as well.”

It was this hope that lay at the heart of her work, Chinna said; hope and celebration of conservation work taking place in Perth, such as at Kings Park and Botanic Garden, where Chinna was the first ever Writer in Residence in 2016, and which inspired a whole section of her book as well as its titular poem, The Future Keepers.

“The quietness of the work they do is such that I don’t think people know about it,” she said.

“They work all over the state and internationally working to revegetate old mine sites and preserve endangered species; they are at the top of their field and they are such amazing people.

“There is a metaphorical thread through this book that we can work together, respect Indigenous knowledge, and protect this extraordinary planet.”

The Future Keepers is published by Fremantle Press at $24.99

‘Broke’ Chronicles a City Out of Cash and Awash in Desperation