Over a lunch of oxtail, rice and peas, and sorrel punch on one of the first warm days of spring, Nicole Dennis-Benn’s sunny disposition came through quickly. The writer, 37, wore a turquoise, yellow and orange printed dress with bangles, and in conversation her responses — “I love it!” “Yes!” “So true!” — were just as bright and upbeat.

Her fiction is another story. “Here Comes the Sun,” her 2016 debut, explores sex tourism at a beach resort in her native Jamaica. Her new novel, “Patsy,” out on Tuesday, takes on similarly heavy themes, including reluctant motherhood, the harsh realities of immigration and the challenge of coming into one’s gender and sexual identity. Its title character dreams of emigrating from Jamaica to New York and reuniting with Cecily, the woman she loves. But part of the life Patsy leaves behind includes her 5-year-old daughter, True. The book alternates between their perspectives. 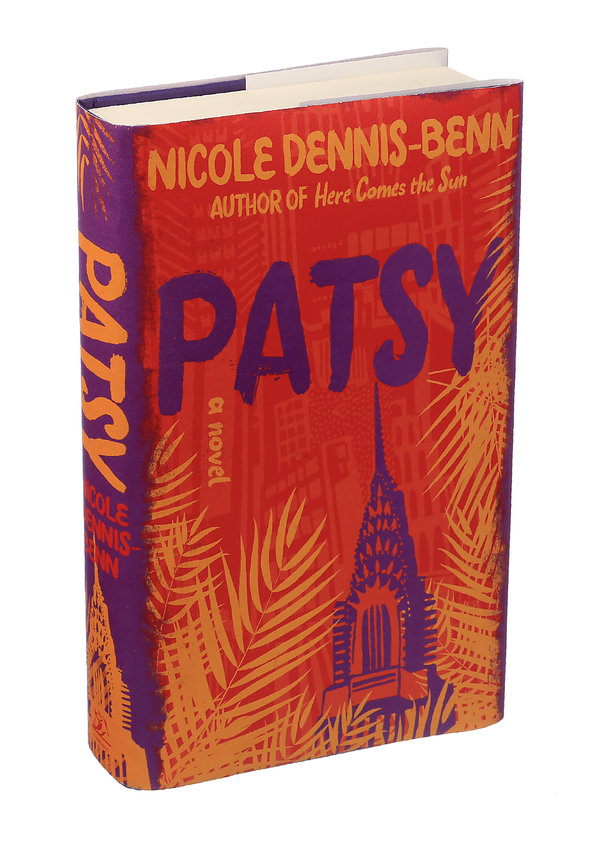 For Dennis-Benn, who now lives in Brooklyn with her wife, Emma, “Patsy” feels more personal than “Here Comes the Sun.” “I was always on the outside, coming out as a lesbian,” Dennis-Benn said. “That’s how Patsy and True feel, like they’re outsiders, looking in.”

Originally planning to become a doctor, Dennis-Benn studied pre-med at Cornell and earned a master’s in public health at the University of Michigan. It wasn’t until she was working at Columbia University as a project coordinator and met Emma that she started to see writing as a potential career. “I was still in the immigrant mind-set,” she said, before Emma challenged it.

“I always see you writing at nights. Are you really a writer?” Dennis-Benn recalled her saying. “She was the one who introduced me to M.F.A. programs.”

Ahead of her new novel’s release, she talked about her immigration story, how she writes authentic Jamaican characters and more. These are edited excerpts from the conversation.

Why did you want to tell this story?

I was an adjunct at CUNY, teaching at the College of Staten Island. I had to wake up really early in the morning to travel on the subway and the Staten Island Ferry. I realized I was on the train with all these Caribbean immigrants, and right above our heads would be ads saying, “Come to Jamaica” or “Come to the D.R.” “Come to Bahamas.” And here we are in New York City, hustling. It was cold. The questions started coming to me: “Who were these people before they left their country? What parts of themselves did they carry? What parts of themselves did they leave behind?”

That’s when Patsy came to me — this woman who wanted so badly to be in America, a country that was sold to many of us as a fantasy, but then realizes that, if immigrants don’t have the education or the legal status, they’re doing the jobs that Americans are rejecting. One of the crushing realities I know personally is of cousins and family members who came here and went through the Rolodex in our mind, like, “Did we ever hear from Jamaicans or anybody that we’d have to clean toilets?” And the answer would be no.

As I started writing this immigrant story, I realized that this woman is not here to give back to her family. She’s here to be a new person. That was when the story opened up, like, “Oh my goodness, she left a whole child behind.” That was challenging for me to write.

Why was it challenging?

Because I found myself judging Patsy. Even though I was creating it, it is jarring, because I felt like, “Wow, this is a woman doing this.” But in my imagination, I always thought, “How about if I write a woman who feels that she couldn’t own that motherhood role? And taking her to the extent where she actually abandons this child?” Patsy didn’t have a choice to begin with. Abortion is illegal in Jamaica, and so a lot of women end up just having their babies, whether or not they want to be mothers. I wanted to explore that part of motherhood and see how that story would unfold.

How do you navigate that, judging your characters?

I write through it. Sometimes I take breaks, maybe a week or two to really assess, “What am I really judging?” For example, with the motherhood part, I’m judging this woman who absolutely cannot embrace her role as a mother. Realizing I had to really unpack my own upbringing, my own socialization as a Jamaican woman — or a woman, in general — and then move forward.

Why did you include the perspective of Patsy’s daughter, True?

I wanted to show the child who was left behind in Jamaica. Usually people say to them, “You ought to be grateful, at least they’re going to America to send back things for you.” They don’t speak about that sense of loss or abandonment. I wanted to get into the psychology of this person who’s coming of age, coming into their own identity and questioning the abandonment. And also, too, an individual who is gender nonconforming. True doesn’t fit into this box of femininity, of womanhood, but has no guide, no one else who is actually like her.

What are the challenges of writing about the negative parts of your culture and your home — the homophobia, for instance — knowing that this will be for broad consumption?

I always think about James Baldwin when I get asked that question, in that he said he loved America so much that he could criticize it. I feel the same way about Jamaica. I love my country. I do write the beauty of it, but I also don’t shy away from those issues that are the reasons I left to begin with — homophobia, classism, racism, displacement. I’m writing to hold up that mirror.

I want to talk a little bit about the use of Jamaican patois. Why did you decide to write in dialect?

We’re told in Jamaica not to use patois in public. It was so ingrained that, even now, I have to remember, like, “Oh yeah, I do have that language.” So this was kind of a rebellious act. As an artist, I have that power to say, “I’m going to put it back into my work, to preserve it.” I want to write authentic Jamaican characters, and I’m not going to write two Jamaican characters talking to each other without using our language.

Growing up, I never read characters who looked like me, who sounded like me. For me, it’s important to do this for another person, for another woman of color, another Jamaican to see that our people exist on the page. I tap into issues that could actually be anybody’s experiences, regardless of who they are, their culture, their race, their background: motherhood, sexuality, class and colorism. I want to tap into those things but actually use protagonists who actually look like me — queer, black, working-class Jamaicans.

What are the challenges of writing working-class characters?

We have so many great stories, but we are so secretive. Look at our young girls, for example — there are so many big issues that we are grappling with, but we’re not able to talk about them, because society respects our silences and shame more than our voices. Now, having this privilege to tell our stories, I’m telling the stories of my mother, my grandmother, the women around me and a society that was colonized, where we were taught to hate ourselves and the sound of our own voices. To know that I have this power, it’s like, “Let me actually tell those stories we were taught not to share with the world.”

Concepción de León is a digital staff writer covering news and culture for the Books section.