ONCE UPON A TOME: THE MISADVENTURES OF A RARE BOOKSELLER

A few years ago, when two pantechnicons were required, at some cost, to transport the crates containing my large personal library to Normandy, one of the drivers said, in my hearing: ‘Hasn’t this man heard of Kindles?’

I have, but I hate them. Books with batteries will never catch on with me. I love paper, ink, the smell and feel of cloth bindings. I want books to be actual objects, and in Once Upon A Tome rare bookseller Oliver Darkshire shares with us his own passion for faded and dusty ‘boxes of Trollopes’ and other bibliographic gems.

There is no money in books, let’s be clear on that point. Darkshire says his pay is only just one up from the ‘supermarket kiosk or vagrancy’.

At best the ‘ugly stepchild’ of the antiques market or fine art, bookselling is ‘a commercial dead-end’, the business always ‘on the edge of a nervous breakdown’. Many of the items offered for sale remain in the cabinets for decades, much of the stock as valuable as a ‘dead albatross’.

Who will ever want the 17 enormous volumes of an out-of-date encyclopaedia, ‘filled with just about everything the layman could want to know about anything’, especially as it is all in French? 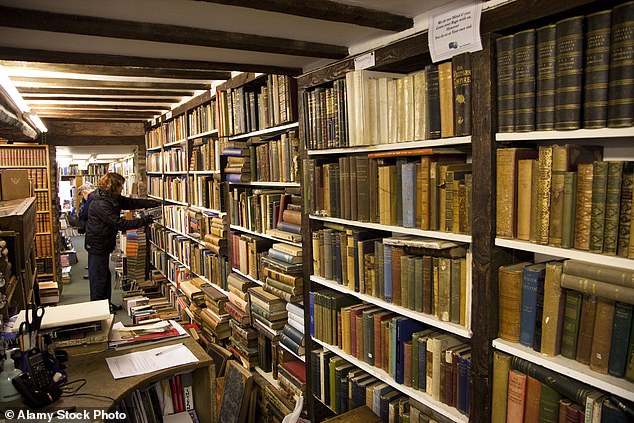 Books with batteries will never catch on with me. I love paper, ink, the smell and feel of cloth bindings. I want books to be actual objects, and in Once Upon A Tome rare bookseller Oliver Darkshire shares with us his own passion for faded and dusty ‘boxes of Trollopes’ and other bibliographic gems

Henry Sotheran Ltd, in Sackville Street, London, where Darkshire is employed, was founded in 1761 and time has not moved on. The doors stick so people can’t get in. Passers-by are knocked unconscious by the sunblind, which extends across the pavement. The shop is a maze of secret passageways and cobwebby chambers, filled with ‘crooked furniture and misplaced literary paraphernalia’.

Darkshire comes across unmanned desks, the drawers long undisturbed. When a member of staff dies or disappears, that’s no excuse to clear out their cupboards, which will be found to contain broken umbrellas, jars of needlework pins or a first edition of Dickens’ The Mystery Of Edwin Drood. The only training and advice Darkshire received was: ‘Never talk to a customer with your hands in your trouser pockets.’

Phones seldom ring, and anyway wouldn’t be answered — and nobody knows how the answer-machine operates, as technology is ‘beyond our ability to configure’.

Computers are anathema. Employees are happier with ‘a gigantic ledger too large to be easily shifted from desk to desk’. In the office are banks of filing cabinets, mounds of papers and binders, ‘arranged according to some bespoke turn of logic coined decades ago’. The mention of spreadsheets draws a blank, and the stapler is a weapon of mass destruction. Book people, ‘colourful and fragile personalities’, are a weird mob. Buyers and sellers alike can get thoroughly absorbed in abstruse topics, such as defunct train guides, vintage A-Z maps of London, botanical primers, etchings of skeletons and ‘different kinds of smut’.

There are plenty of collectors avid for the diaries of Viscountess Vane, an 18th-century widow with 100 lovers. Queues form for photographic albums of French maids or lumberjacks. Vintage lingerie catalogues sell like hot cakes.

Such excitement occurs seldom, if truth be told. Most days, when eccentrics wander in, Darkshire hopes against hope they’ll ‘surprise you with a Gutenberg Bible’. But usually they are trying to sell a worthless ancestral stamp album or, ‘the last thing you want to stumble across as a bookseller’ — bound volumes of Punch.

Darkshire spends most of his shift putting together the shop’s catalogue, ‘identifying the edition, checking for damage, writing some advertising copy’. His task is to spot scarcity value, assess the foxing and examine gold-tooled leather bindings made from goat or cow. 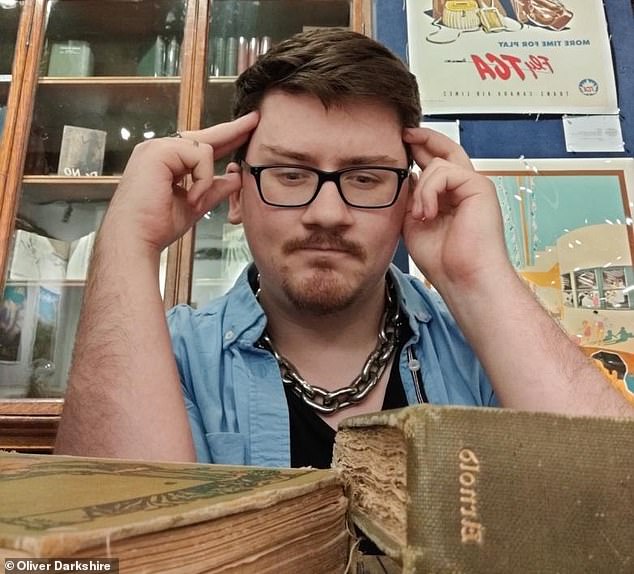 Henry Sotheran Ltd, in Sackville Street, London, where Darkshire, pictured, is employed, was founded in 1761 and time has not moved on. The doors stick so people can’t get in. Passers-by are knocked unconscious by the sunblind, which extends across the pavement. The shop is a maze of secret passageways and cobwebby chambers, filled with ‘crooked furniture and misplaced literary paraphernalia’

Sotheran’s has a restoration department, or book hospital, where through ‘an experimental combination of glue, hope and witchcraft’, rips are mended, marbled endpapers replaced and covers re-sewn. One wonders why anybody bothers, as periodically there needs to be a clear-out, with stock donated to charity outlets or else ‘shoved into recycling’.

But there are occasional gems. A century ago, an American bought a jewel and ivory-encrusted poetry book, and Sotheran’s consigned it for safe onward delivery to the hold of an ocean liner making its maiden voyage. It’s a shame that was the Titanic.

Another time, a customer brought in a yellowing pamphlet of Measure For Measure, which turned out to have been chopped from Shakespeare’s First Folio of 1623.

‘You don’t really get to see something this scarce and influential in the wild very often.’ Usually, they are locked away in museums.

Books are fragile, even volatile. Darkshire, wearing gloves, inspects poisoned volumes aimed at the colonial market in India, Africa or Malaya. The idea was that, saturated in pesticide, the books would repel munching vermin. Or possibly kill the servants replacing them on shelves.

We are also advised to avoid Victorian novels with bright green jackets, as the dye contained arsenic. Furthermore, the chemicals used to preserve leather covers may make books ‘spontaneously explode’ if over-generously applied.

Who’d have thought bookselling could be a war zone? It is sometimes a lunatic asylum, especially when mad people appear requesting Nazi memorabilia or accounts of ‘how Jews control the weather’.

A customer once wanted a book proving ‘women had smaller brains than men’, and there was considerable interest in the copy of Mein Kampf which had belonged to Marlene Dietrich.

Books have to be kept away from the light, otherwise collections turn into ‘twisted, smouldering rags’.

In London, floods and damp are a continual problem. At Sotheran’s there are buckets everywhere, ‘a motley array of pails and bowls’. There is a mould infestation up the walls. In the spider-infested cellar, like forgotten prisoners in a medieval castle, are ‘books largely decayed almost beyond rescue’.

Once Upon A Tome is an utter treat for those of us who prefer books and reading to any other activity — the oddballs and obsessives who, like waggish Oliver Darkshire, never easily mixed with other children at school; who loathed compulsory games and sport; who have never ‘texted’ or ‘tweeted’; and who require a lot of floor space, ‘an indecent amount of square footage’, to house our ever‑expanding hoard.

What to Read by Tony Horwitz