This book careens and skitters across the landscape of its topic, which means I now know a number of interesting things I didn’t know when I picked it up: Netflix uses up 15 percent of all the internet bandwidth on earth; shoppers return 35 percent of the goods they buy online, which is as much as six times more than when they shop in stores; producing polyester for clothes emits as much carbon dioxide as 185 coal-fired power plants; a single fleece garment can shed 100,000 plastic microfibers in one washing.

There are lots of these factoids in “Inconspicuous Consumption.” Tatiana Schlossberg, who used to cover climate and environment for The New York Times, has not done a great deal of original reporting — the book includes accounts of just a few short trips. But she has scoured the internet for pretty much every scary and fascinating statistic on her subject that you can imagine, and her time has been well spent. You come away from her book with a stronger sense of the sheer largeness of the human enterprise — the number of us now consuming, and the overwhelming effect of all that volume.

[ This book was one of our most anticipated titles of August. See the full list. ]

So, for instance, cashmere used to be a relatively rare luxury item. But the Chinese began to see an opportunity for an export market, and soon Inner Mongolia was surging in population — of herders, but mostly of goats, from five million in 1990 to 26 million in 2004. Those goats, in turn, have overgrazed much of the region’s remarkable grasslands, turning them into desert. “To put it more simply: More goats to meet increasing demand … means there is more grazing, and therefore more desertification, so the goats are undernourished, which makes their hair coarser, causing the supply of high-quality cashmere to shrink, causing the herders to breed more goats to try to meet the demand for better cashmere, and on and on forever until, once again, the world collapses in on itself like a dying star.”

One response to this would be to urge readers to buy less cashmere (and less fleece, and less cotton, and less viscose rayon, all of which Schlossberg also covers). Indeed, her description of “fast fashion,” with some stores having 20 “seasons” annually, leaves one thinking it would be smarter to wear whatever you’re wearing forever, content in the understanding that it will swing in and out of style with some regularity. But it is to the author’s credit that she doesn’t, mainly, take this easy way out. 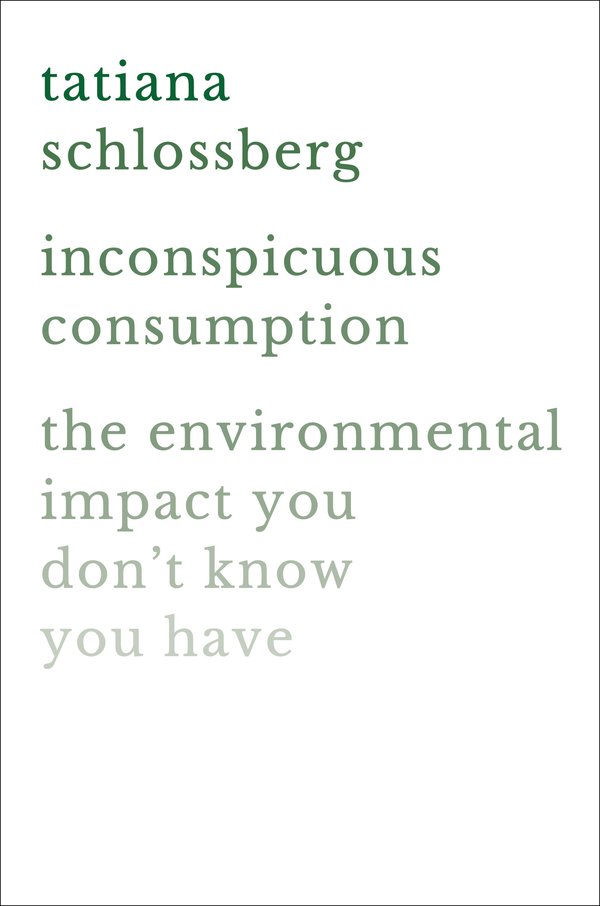 For 10 or 15 years beginning in the 1990s such consumer-driven environmentalism was a constant refrain, leading to endless disputations about paper towels and disposable diapers versus sponges and cotton nappies. When I picked up this book, I feared it might go down the same cul-de-sacs, but it doesn’t, and for the obvious reason: That earlier campaign was essentially useless. Some fairly small percentage of people read those books, and an even smaller percentage took regular and clear action. Those people are morally consistent heroes whom we should all salute, but it turns out there are not enough of them to make a difference. Everyone else continued to stream Netflix, buy cashmere and use air-conditioning, which meant that the amount of carbon pouring into the atmosphere kept increasing, and the temperature kept rising. And those of us working to contain this environmental disaster increasingly turned our attention to systems, and to the powerful actors within them.

To go back to goats for a moment, as Schlossberg says, “it is not the fault of the consumer that cashmere is cheap, and it’s not wrong to want nice things or to buy them, sometimes. … It’s not within your control how some company sources and produces its cashmere, or the size of the herd that they got it from. That should be the corporation’s burden … or governments should make sure they act responsibly.”

Governments and corporations, of course, don’t do such things automatically — they need citizens to push them. But it doesn’t require every citizen to push in order to make change (since apathy cuts both ways, social scientists estimate that getting 3 or 4 percent of people involved in a movement is often enough to force systemic change, whereas if they acted solely as consumers that same number would have relatively little effect). You can obviously do both, and all of us should try — but fighting for the Green New Deal makes more mathematical sense than trying to take on the planet one commodity at a time.

And that, interestingly, is where Schlossberg seems to come out, even as she conducts her rambling tour of each of those commodities. When she writes about fuel, for instance, she goes into great detail: Whether Uber rides displace car trips or bus trips turns out to be both important and vexingly difficult to determine, for instance. But in the end, the changes we make in our transportation lives will matter mostly if we make them “as a collective.” That is to say, instead of trying to figure out every single aspect of our lives, a carbon tax would have the effect of informing every one of those decisions, automatically and invisibly. The fuel efficiency standards that the Obama administration put forward and Trump is now gutting would result in stunningly different outcomes. And so on.

Many of the subjects Schlossberg covers will be familiar: She recapitulates the decades-old literature about “food miles,” for instance, without being able to take us much farther than “it’s complicated.” But there are a few places where her reporting covers issues that few people know about and everyone should. A dumb loophole in the relevant law, for instance, allows European utilities to claim that burning wood for electricity is “carbon-neutral,” even though the science of the last decade makes it clear that turning trees into electricity actually sends a giant pulse of carbon into the atmosphere at precisely the moment when it could break the back of the climate system. Because of this loophole, the forests of the Southeastern United States are currently being turned into pellets and shipped across the Atlantic, a practice both climatically pointless and heartbreakingly destructive of one of the world’s great ecosystems. Bringing this abuse to light is a real service.

Schlossberg also reminds us regularly that justice is at issue in these decisions. The giant coal ash piles that accumulate by our power plants don’t threaten golf courses — they threaten the hometowns of poor black people. A reason to fight for hyper-efficient air-conditioners is that poor people across Asia will need them badly on a planet they have done little to warm.

I confess that Schlossberg’s writing style grates on me — the rate of cutesy asides per page is diabetic. But she deserves real credit for coming through her journey into the guts of the consumer machine with a clarifying insight: We aren’t going to solve our problems one consumer at a time. We’re going to need to do it as societies and civilizations, or not at all.

Bill McKibben is the author, most recently, of “Falter: Has the Human Game Begun to Play Itself Out?”