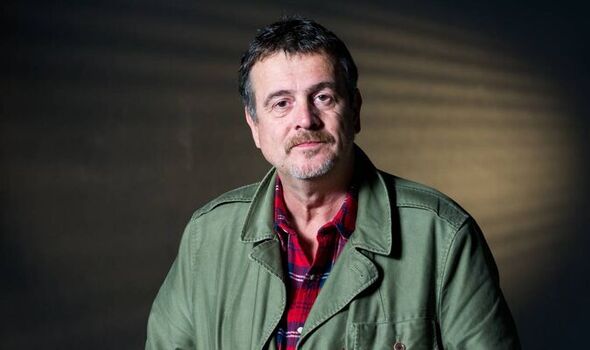 If ever there was a place not to be accused of crimes against Sir Paul McCartney, it would most likely be Liverpool. So bestselling author Mark Billingham was left red-faced after being accused of pinching a cardboard cutout of the former Beatle following a signing in one of the city’s bookstores earlier this year.

“They still had some of the displays from Macca’s book of lyrics that came out last year,” explains Mark, 60, a massive Beatles fan.

“The woman running my event said I could take one. They had a full-size cut-out, but I wasn’t going to get that on the train, so I took a mini-Paul instead. I walked into the shop window, helped myself and carried it off down the street.

“But the woman on the ground floor didn’t know her colleague upstairs had given me permission. They chased me down the road yelling, ‘You’ve taken our signage! Can we have our signage back!'”

We wonder aloud what the charge would be: Taking Macca without consent? Felony by Beatles? It’s the sort of warm, fuzzy anecdote the Paperback Writer – pun intended – specialises in. Over a two-decade career, he’s sold more than eight million copies of his Det Insp Tom Thorne novels.

Today over extra-hot spiced chicken thighs in Nando’s – Mark nurtures a vague ambition to visit all 450-odd UK branches of the fast-food chain – he talks Beatles, books, festivals and makes a surprising revelation: there’s a new cop in town and his latest Tom Thorne novel is, for the moment, his last.

His brilliant new thriller, The Murder Book, is the 18th in the hit series that began in 2001 with Sleepyhead, followed by Scaredy Cat a year later. Both had killer hooks, became best-sellers and launched him as one of the leading lights of the UK crime writing fraternity.

But there won’t be a 19th for now. Instead, Mark, who lives with his wife, TV director Claire Winyard, and their two children in north London, is launching a new character.

“It’s what all series writers talk about in quiet moments in bars at festivals,” he smiles. “You don’t want to be that writer who writes two or three books too many.”

The Last Dance is due out next spring, and will be the first, he hopes, of a new Blackpool-set series. It began life as a TV vehicle for a well-known comedian – Mark can’t say who but readers can guess away – which hasn’t (as yet) been made.

“That still may happen but it got to the point where, because TV takes so long, I just thought, ‘I’m going to write this book anyway’. I’ve spent two years living with this character while I’m writing this show. I’m going to write a book about him.”

His new hero, Det Insp Declan Miller – who has recently lost his wife – is inappropriately outspoken.

“He doesn’t censor himself. He’ll say what’s on his mind at the worst possible moments. When a colleague is trying to comfort someone who’s lost a loved one, Miller will ask what colour the curtains are. He’ll just say what he’s thinking.”

It sounds like the book will combine all the different strands of Mark’s career – he’s a former comic and actor as well as a screenwriter and novelist.

“I’d think of jokes in the Thorne novels and not put them in. Now it’s my editor’s job to take some out. I want the book to be moving and an exploration of grief but I do want people to laugh.

“That said, it’s still a crime novel. My character is still a copper. There are still murders and plenty of pain and grief and loss, but Miller’s a character who’s dealing with grief, and his way is to say the unsayable.

“It’s a bit like laughing at a funeral – something that we all sometimes do despite ourselves.”

Intriguing as it sounds, for now fans must settle for enjoying DI Thorne in The Murder Book – and the return of one of Mark’s most fiendish villains, Stuart Nicklin, who first appeared in Scaredy Cat.

“I’ve had a surprising number of emails over the past few years asking when he’s going to be back and I always knew it was in this book,” he says.

“By the end of Scaredy Cat I wanted to write about him again.”

That fiendishly-plotted book saw Nicklin using the power of fear to force another man into killing with him – two serial murderers targeting similar victims in similar circumstances on the same day to fox the police.

“The idea of having the power to manipulate or persuade or cajole people into doing something they wouldn’t normally do – including murder – is fascinating. Nicklin is incredibly charismatic and can get people to do his will,” says Mark.

This time round, Thorne is hunting a woman he knows is responsible for a series of murders.

“That hunt will plunge him into a nightmare from which he might never wake up,” riffs Mark in a cinema trailer voice. “It’s a nightmare that has a name… Stuart Nicklin!”

He pauses: “There’s also this terrible secret that has bound Thorne and his closest colleagues together for the last few books and there’s a reckoning coming. It draws a line under a few things, which is why it felt like a good place to hit pause.”

Mark grew up in Moseley, Birmingham, with his brother and their single mum, who worked emptying pub fruit machines and changing records in jukeboxes. His entry into crime writing came about almost by accident.

“The acting was bits and bobs, though stand-up was going fine. I was travelling all over the world and playing at the Comedy Store,” he recalls.

“But I was reading crime fiction and going to all the festivals, interviewing people like Ian Rankin and Michael Connelly. I’d be shaking like a leaf – and now we prop up bars together.

“While I was writing sitcoms and jokes, the idea of writing a book just seemed preposterous. They’re like house bricks. How much work? Then one summer on holiday, I sat outside this villa in Crete every night writing the idea for Sleepyhead.

The aftermath of a terrifying real-life experience in the late Nineties, in which Mark was beaten and held hostage by three men in a Manchester hotel while they plundered his bank cards, helped fuel his writing.

“I would’ve done anything they told me to do I was so petrified: ‘Down on the floor or you’re ****ing dead.’ From that point on, you’re infantilised and you resent that afterwards and get very angry. Thorne carries anger and I did too,” he says.

“But that experience also made me want to write about victims. Originally, Thorne wasn’t even meant to be the main character but I needed a copper.

“All these publishers started asking if it was the start of a series and I went, ‘Yep!’ I was still working as an actor and, when anyone asked you if you could do something, you’d just say yes, and figure it out later.”

Those earlier books helped Mark manage some of the after-effects of being a crime victim. These days he is far more laid-back and employs a “less is more” approach, especially in fictional violence.

“A single drop of blood on an otherwise pristine kitchen floor, that’s a horrific image,” he says, “not blood painted up the walls.”

The first two books, Sleepyhead and Scaredy Cat, were adapted for Sky One starring The Walking Dead’s David Morrissey as the country music-loving DI. Sadly, another three episodes were dropped when a new head of drama arrived. Though there was talk about a reboot, before Covid.

“It’s such a lottery,” Mark admits. “If every time some production company took you out for a posh lunch you got excited, you’d never get any work done. You’re at the mercy of money and people sticking in a job. Every author has a horror story.”

Since his debut, and the 17 Thorne books that followed, Mark has published four standalones, presented documentaries and contributed to several anthologies.

He also performs rock music with Fun Lovin’ Crime Writers alongside the likes of fellow bestsellers Val McDermid, Chris Brookmyre and Doug Johnstone, and remains one of the driving forces behind the Theakston Old Peculier Crime Writing Festival in the NorthYorkshire spa town of Harrogate every July.

“I’m a performer at heart, a big show-off and, for me, the perk of the job has been the festivals and the stuff that goes with that. ‘We want to fly you halfway round the world, put you up in a nice hotel and get you to talk about your books?’ That’s a very easy yes.

“It’s something we’ve all missed over Covid.”

This year he’ll be interviewing US crime writing giant Michael Connelly as one of the highlights of the globally famous festival, as well as hosting the much-loved Saturday night crime fiction quiz with fellow Theakston mainstay McDermid.

“When lockdown started I really enjoyed it. But then, I kind of hit a wall and it started to get me down. My wife said to me, ‘You just miss an audience,’ and she wasn’t wrong.

“It’s beautiful to see people sitting on the grass or in a deckchair with a glass of wine and a book. Harrogate is the first weekend crime writers mark out in their diary.”

“Last year was the first chance we had, but people were still cautious,” he adds. “The idea is that this is the big, full kick-a**e Harrogate this year, it’s going to be awesome.” And with that, Mark returns to his eye-wateringly hot Nando’s chicken.