The pint-sized heroine who CAN stand the heat: Gripping new book shares one firefighter’s quest to save lives, after developing ‘hyper-vigilance’ as a homeless teenager

THE HEAT OF THE MOMENT

There’s been an explosion in a tunnel. The air fills with the sound of sirens; dazed and bloodied people stagger out through the smoke as emergency services struggle to get their vehicles past dozens of cars abandoned in the road.

Senior firefighter Sabrina Cohen-Hatton arrives on the scene and watches the concrete crumbling around the tunnel mouth. A bomb has exploded.

The fire has been extinguished and some 115 people have been evacuated, but search-and-rescue teams believe there are upwards of 30 casualties still inside. She must decide whether to continue risking the lives of those in search-and-rescue teams, or pull them out and leave the trapped and wounded civilians to die. Sabrina Cohen-Hatton (pictured) who is the Deputy Assistant Commissioner for London Fire Brigade, recounts her career in the fire service in a gripping new memoir

A police commander comes striding towards her with intelligence of a secondary device due to detonate in 15 to 20 minutes, designed to kill as many emergency responders as possible.

Cohen-Hatton’s team are in a ‘hot zone’. She orders them to pull out, but one firefighter, Matt, refuses. He is keeping a promise to stay with a trapped nine-year-old girl.

What should Cohen-Hatton do? Accept the loss of Matt and the child? Or put more lives at risk to take a shot at saving them?

The fictional scenario above was designed to improve decision-making in the UK’s emergency services. Although most of us won’t be faced with decisions of such magnitude, Cohen-Hatton’s advice on making smarter choices can be applied to most areas of the average life.

Her interest in the subject began in childhood, after her dad was diagnosed with a brain tumour. He died in 1992, when she was just nine years old. As his condition deteriorated, she saw him make riskier decisions and lose control of his emotions. In the wake of her dad’s death, she ended up homeless at the age of 15. Sleeping in a derelict building, she developed ‘hyper vigilance’ after being assaulted and urinated on as she slept. Although she struggled on with the schoolwork at which she excelled, she was devastated when a teacher avoided eye-contact with her when he saw her selling The Big Issue.

But, after joining the Welsh fire service at 18, she quickly rose through the ranks. The death of a colleague — who underestimated the danger he was in — drove her to study risk evaluation.

After marrying another firefighter, she earned an Open University degree in psychology, then a PhD, all while holding down her job and raising her young daughter.

At 5ft 1in and 8st, Cohen-Hatton may not look like a traditional firefighter — she has long hair and loves a manicure — but she is determined to show her child what a woman can achieve.

She is frank about the sexist abuse she has experienced. At one fire station, her colleagues refused to support her in dangerous situations and gave her an obscene nickname; other men messed with her kit and sexually assaulted her ‘more times than I care to remember’. Told by a drunk senior officer that female firefighters were unfit for promotion, Cohen-Hatton determined to prove him wrong. She is now Deputy Assistant Commissioner for London Fire Brigade.

Cohen-Hatton is upfront about the trauma and anxiety she suffered after attending a fatal car crash, and writes movingly about a colleague who developed psychosis after a child died in a fire he was fighting. 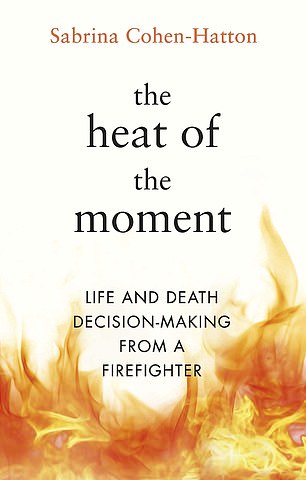 Her own research has shown the life-saving power of empathy on the job. Good leaders need to listen more to their teams, and learn when to trust their instincts or question their assumptions. This can only be achieved by running regular exercises such as the aforementioned tunnel problem. Often, there is no perfect solution. You can only aim for the ‘least worst’ outcome.

So Cohen-Hatton ends her book with a polite request for public understanding when the emergency services get things wrong.

‘In the heat of the moment, in the thick soup of noise and light, it is not so easy to find that razor-sharp clarity. Judge us, and hold us to account, and demand an effective, efficient service.

‘But walk a mile in our shoes, too. Know that not a day goes by when we don’t ask ourselves if we could have done better. Even when, sometimes, our best would never have been enough.’

Game of Thrones: Where did Drogon take Daenerys? It was NOT to be resurrected