The original Bohemian Rhapsody of two art world hedonists: Their art school was burned down by Lucian Freud, they dined on swan and drank cocktails made from surgical spirit

A LESSON IN ART AND LOVE

Though Ernest Hemingway, who met them in Paris, was irritated by what he called their ‘superior, simpering composure’, most people encountering Cedric Morris and Arthur Lett-Haines, who ‘dined on wild swan and drank to excess,’ and who may best be described as professional bohemians, were enchanted.

In the Twenties and the Thirties they were the archetypal ‘jolly young people in colourful clothes’, organising fancy dress parties attended by painter Augustus John and actor John Gielgud, with Royal Ballet choreographer Frederick Ashton in charge of the dancing.

Music came from a wind-up gramophone, except when composer Benjamin Britten turned up with tenor Peter Pears, who sang ‘The Foggy, Foggy Dew,’ to Britten’s guitar accompaniment. To drink there were cocktails made from surgical spirit — people didn’t have hangovers so much as comas. 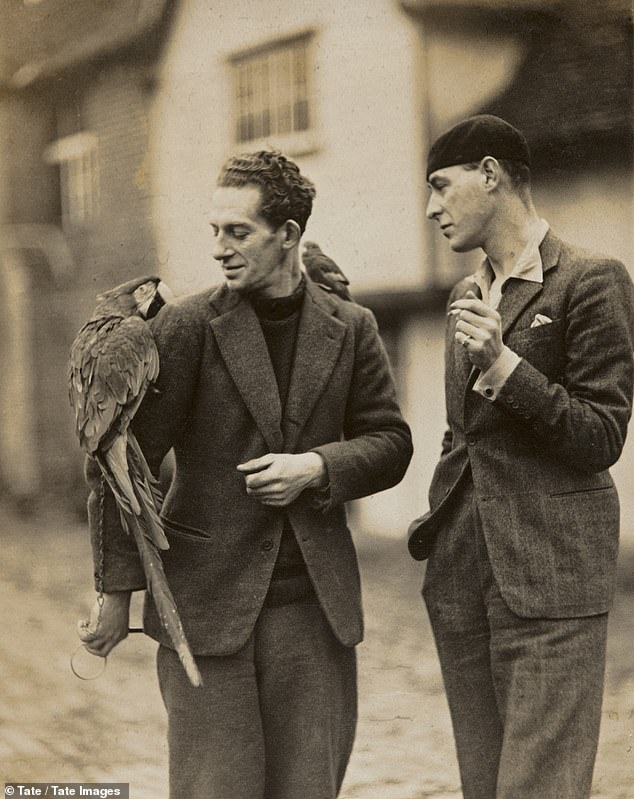 Cedric Morris (left) and Arthur Lett-Haines (right), who ‘dined on wild swan and drank to excess,’ may best be described as professional bohemians

In 1937, Morris and Lett-Haines founded the East Anglian School of Painting and Drawing, in the village of Dedham.

The most illustrious pupil was Lucian Freud, who burnt it down — a discarded cigarette butt amidst a pile of turpentine rags was the excuse. Morris and Lett-Haines bore him no ill will — and they simply started up again in new premises at Benton End, near Ipswich.

Morris (b. 1889) was a South Welsh baronet with a passion for propagating (and painting) purple poppies and smoky grey irises, plants with which he had a peculiar relationship. ‘Temperamental sluts!’ he once called them.

He was brought up in family mansions in the hinterland of South Wales, and he fossicked for shells on the beaches of the Gower. Morris’ ‘future interest in plants came about as a baby when his mother would give him a flower to stop him screaming,’ says Hugh St Clair, author of this genial study.

At Charterhouse school, Morris was ‘sensitive and self-conscious’, and ‘I soon discovered,’ he confessed, ‘that I possessed the kind of body people liked to touch.’ 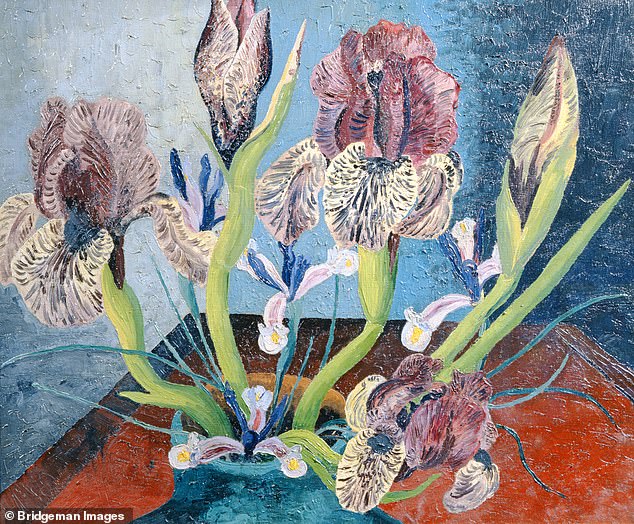 In 1937, Morris and Lett-Haines founded the East Anglian School of Painting and Drawing, in the village of Dedham (Pictured: Mottled Iris by Cedric Morris)

He enrolled for boxing, but ran away and hid in the woods. He went as far as New York, indeed, where he worked as an elevator-boy. Returning to England, he was a flop at the Royal College of Music, being seemingly tone-deaf, and, when war broke out, he was rejected for military service. He instead trained horses for the Front: ‘Their death-rate on the battlefield was high and they needed replacing with increasing frequency.’

Lett-Haines (b. 1894), meanwhile, had a modest upbringing in Maida Vale. His father was an official of the Amateur Wrestling Association, and sent his son to work on a farm, to toughen him up.

In 1915, Lett-Haines was wounded in Mesopotamia. A year later, aged 22 and living in Chelsea, he married a girl called Aimee. At their Armistice Day party in 1918, he met Cedric Morris.

Lett-Haines and his bride had planned to emigrate to America, so ‘he told Aimee to go on ahead’ — and stayed behind with Morris, sold the Chelsea property to the Sitwells, and journeyed to Cornwall, ‘pondering his decision to leave his wife for a man’. (Aimee, poor thing, drops out of the story. They were never actually divorced and she died in California, in 1964.) 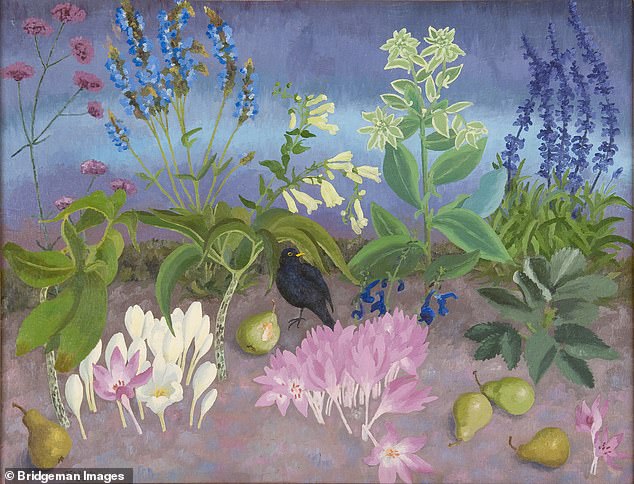 The most illustrious pupil was Lucian Freud, who burnt it down — a discarded cigarette butt amidst a pile of turpentine rags was the excuse (Pictured: Blackbird and Flowers, by Morris)

The chaps remained together for the next 60 years. According to Hugh St Clair, ‘quibbling and bitching were part of the way their relationship worked’ — and Morris and Lett-Haines, wearing berets and Fair Isle sweaters and desperate to be taken for artists, were soon renowned as gentlemen eccentrics, keeping rabbits and parrots in their temporary abodes.

To make ends meet, Lett-Haines translated French poetry, Morris painted café scenes or vases of flowers, which to him were ‘intense and determined things, symbols of strength portraying the eternity of existence’. (Do remember that, when next pruning the tea roses.)

Gradually, however, Morris’ art took off. There were many exhibitions and favourable reviews, and he discussed painting techniques with Winston Churchill.

Lett-Haines’ surrealist watercolours, however, were less esteemed. Unlike Morris, he received no invitations to join societies and he was never ‘sought out by the press’, though he did once have a few pictures exhibited at Fortnum’s.

The idea for the East Anglian School of Painting and Drawing, situated in a landscape familiar to John Constable where ‘woodcock swooped in winter and nightingales sang on summer evenings’, came about when Morris decided he wanted somewhere tranquil to grow his irises and work on canvases depicting abundant gardens.

Lett-Haines was to function as ‘manager, organising secretary and cook’, where he was assisted in the kitchen by none other than Elizabeth David, who used herbs, spices, olive oil and garlic — unheard-of ingredients in England at the time. 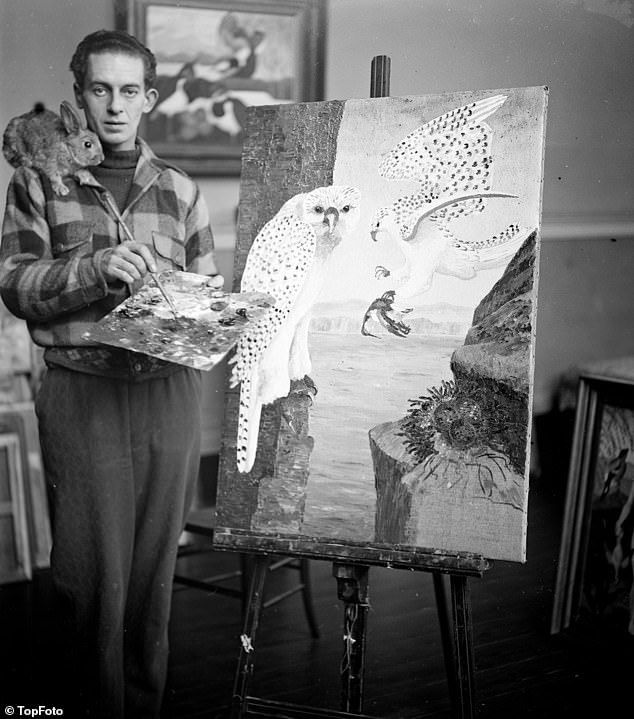 According to Hugh St Clair, ‘quibbling and bitching were part of the way their relationship worked’ (Pictured: Morris in 1928)

In addition to landscape painting and life drawing — where the models were a toothless crone from the local asylum and a man with the wonderful name of Dicky Chopping, ‘who agreed to pose nude’ — the school revolved around lavish meals with wine. A typical topic over dinner would be, ‘Did you know camels copulate backwards?’

Maggi Hambling, now one of our most highly regarded painters and sculptors, was a pupil. To pay her way she slaved in the kitchen. ‘I had to scrape maggots from the meat,’ she recalled, wincing at the memory of the clouds of flies. To reach a fridge Maggi had to clamber over buckets of soaking underwear.

Lucian Freud turned up, because he’d been expelled from everywhere else — most recently from Dartington ‘for dropping his trousers in the street’. He sold his exquisite paintings of brambles for £3.

The school survived until the Sixties, though the gardens became overrun with weeds as Morris’ eyesight failed. The hosepipe ban in 1976 was a catastrophe.

Lett-Haines died in 1978, Sir Cedric Morris four years later. Obituaries made no mention of their relationship. Last year, Benton End was bought by a charitable foundation, which is pledged to restore the garden and offer painting classes.