TANGLED UP IN BLUE
Policing the American City
By Rosa Brooks

WE OWN THIS CITY
A True Story of Crime, Cops, and Corruption
By Justin Fenton

In late 2015, I interviewed several young police officers over lunch in the middle of their patrol shift. We were near St. Louis, not far from Ferguson, where the year before an officer from a different department had shot and killed Michael Brown, sparking protests and a nationwide debate about law enforcement. I asked each officer the same question: What do you want to be doing in 10 years? I assumed one might say “detective,” another “chief.”

Most of them responded with the same word: “tactical.” They wanted to be on a SWAT team, or something like it, handling shootouts and other high-risk situations. They were earnest about wanting to serve the public, but they also seemed a little bored, stopping cars and checking them for guns and drugs. They were mostly white. All the drivers were Black. The officers acted politely, at least in the presence of a white reporter, but the residents told me they felt harassed and under siege. Six years later, policing has drifted even further from a policy dilemma to a full-blown culture war. Between the talk of defunding and the “thin blue line” American flags, it’s not even clear that we agree what the problems of policing and crime in America actually are, much less how to solve them.

In “Tangled Up in Blue: Policing the American City,” the Georgetown law professor Rosa Brooks takes a novel approach, chronicling her experiences over the past few years as a volunteer reserve officer with the Washington, D.C., Metropolitan Police Department. She takes us into neighborhoods steeped in intergenerational poverty, addiction and violence. “When other social goods and services are absent or scarce,” she writes, “police become the default solution to an astonishingly wide range of problems.” The constant deluge of tragic and avoidable conflict is enough to make some of her patrol partners callous and cruel — one even calls the residents “animals” — but Brooks also shows that the officers are coping with their own despondency. “The main occupational hazard of policing is not assault or injury, but cynicism,” she explains. “Sometimes, it seems like everyone you meet is crying or yelling.” 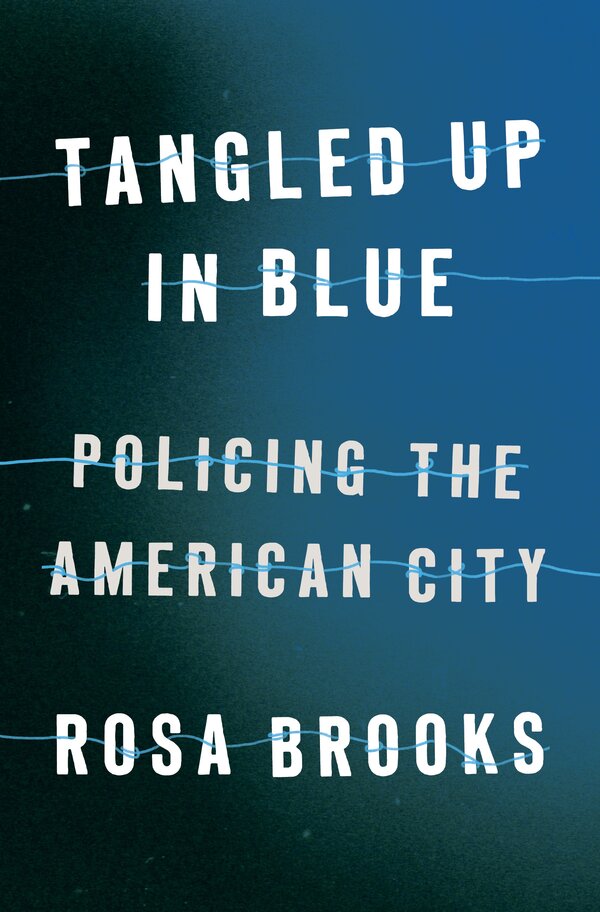 Brooks has an anthropologist’s ear for the language of policing, jumping from the reports full of passive-voice bureaucratese to the darkly humorous, profanity-laden shoptalk. She zips from hilarious descriptions of going to the bathroom while overloaded with clunky gear to bone-dry observations: “The ethics lesson was slightly less detailed than the guidance on the proper wearing of uniforms.” Anecdote by anecdote, she builds to a cautious analysis of how “even normal, careful, lawful policing often ends up compounding devastating social inequalities,” even if few officers display overt racism.

Her style recalls the work of immersion journalists like George Plimpton, Ted Conover and Barbara Ehrenreich — who happens to be Brooks’s mother. Brooks makes this part of the story, nesting in a book on policing a beautifully written mini-memoir about growing up the daughter of a famous activist and writer, who disdains the police but also values a certain toughness. Brooks explores how much this shaped her own desire to be an officer, and her self-awareness gives her insight into the practical, adrenaline-hungry tendencies that may attract people to police work. “Mostly, my partners wanted to be somewhere else, doing something more interesting,” she writes. “They wanted shootings, stabbings and high-speed car chases.”

During her training, Brooks notices how all the students seem obsessed with watching videos of officers who briefly let down their guard and end up paying with their lives. Her fellow officers are jumpy, always convinced that a woman is reaching for a gun rather than her wallet, or that a man will pounce if they don’t restrain him. She suggests that an exaggerated sense of risk too often leads to tragedy, and that the police should be encouraged to accept more risk to themselves. “They’re told they have ‘a right to go home safe.’ Too often, they forget that other people have a right to go home safe too.” It’s easy to imagine the criticism she’ll get, but her calm, considered tone, grounded in experience, is itself an achievement.

Culture and training can lead well-meaning officers toward tragic outcomes. But in other cases, departments make it possible for dishonorable officers to flourish. In “We Own This City: A True Story of Crime, Cops, and Corruption,” Justin Fenton, a reporter for The Baltimore Sun, traces the rise and fall of his city’s Gun Trace Task Force, a group of officers who spent years robbing drug dealers, selling drugs themselves, skimming money from house seizures, planting evidence and defrauding taxpayers through overtime claims. Their reign produced the death of a civilian and numerous wrongful charges and convictions. Another officer died under mysterious circumstances one day before he was set to testify against members of the task force.

Fenton weaves the career of his antihero, Wayne Jenkins, the unit’s head, together with accounts of Baltimore’s high crime rate and the desperation of Baltimore’s leaders to get guns and drugs off the streets, no matter the methods. Jenkins doesn’t go on the record — although he denies many of the crimes for which he was convicted — but in some ways this makes for a better story, as a huge range of people offer a pointillistic portrait of this slippery, somewhat mysterious figure. In a perversion of traditional drug investigations, Jenkins asked his victims — mostly drug dealers whom he knows nobody will really see as victims — which other dealers they would rob, as a way of finding new targets. We see a young policeman’s desire for action allowed to fester toward troubling extremes, as Jenkins gets into multiple, dangerous high-speed chases every day.

Clearly inspired by “The Wire,” Fenton populates his narrative with a network of officers, informants and street dealers, all with different motivations and interests. Some of these personalities come through more vividly than others, but the overall effect is to capture the disorienting, churning quality of a city where the good guys and bad guys aren’t easily distinguished. Fenton lays out the meticulous work of F.B.I. agents to unravel the corruption, and at many moments their success seems anything but assured: While this is all playing out, Freddie Gray famously dies in Baltimore police custody, protesters fill the streets and prosecutors fail to get convictions.

“Between those who had experienced the abuse and the relatives, friends and co-workers who heard their stories, people who had never trusted the cops in the first place became only more contemptuous of them,” Fenton writes of the task force. “Baltimore’s Black communities have been both overpoliced and underpoliced.” Favoring hard-boiled reporter’s prose, Fenton mostly emphasizes story over such analysis, but he shows how, in our zeal to combat crime, we have allowed institutions to produce it.

There will always be a role for adrenaline junkies among the ranks of emergency workers, and there will always be moral ambiguities when we send people, no matter how well trained, into difficult, chaotic situations. Both Brooks and Fenton implicitly question the value of our culture war over policing, instead offering close observations and cautionary tales. They also offer glimmers of hope, whether in Fenton’s admiring portrait of the F.B.I. agents who saved Baltimore from its rogue officers, or in Brooks’s encounters with decent people who are attracted to the profession for the right reasons. “I’m worried about getting cynical,” a young officer tells Brooks. “I don’t want to turn into the kind of cop who just shrugs when someone gets shot.”

Game of Thrones end: Daenerys was always WRONG about one thing and doomed to FAIL