The little bird with the very large songbook: Folk singer offers a delightful miscellany of nightingale fact and fiction

At 10.45pm on May, 19, 1924, BBC radio announcer Rex Palmer interrupted the Saturday evening broadcast by dance band The Savoy Orpheans to whisk listeners into a Surrey woodland, where cellist Beatrice Harrison had been joined by a nightingale.

In those days, just two years after the BBC began broadcasting, wirelesses were scarce. But over a million people around the world tuned in to hear the bird singing along with snatches of Elgar, Dvorak and Danny Boy.

Those without a wireless telephoned friends to listen through the earpiece. In the weeks after the broadcast, Harrison received around 50,000 letters from delighted listeners. 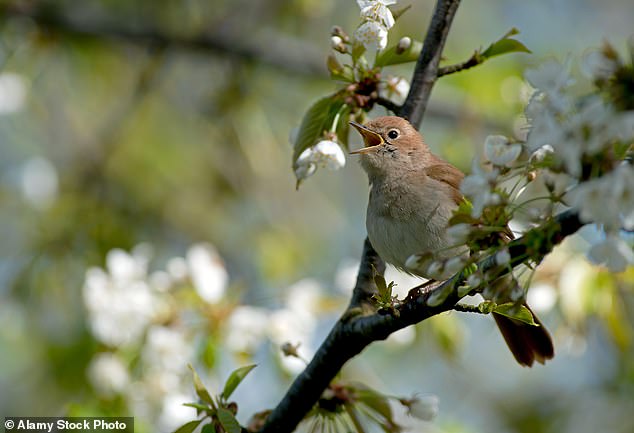 In the silence of lockdown, many Brits will have enjoyed their first encounter with what folk singer Sam Lee describes as the little bird’s ‘language of enchantment’ (file image)

The beautiful burst of unexpected birdsong acted as a balm for a nation traumatised by the Great War.

Although BBC Director-General Lord Reith had initially baulked at the expense and technical challenges of making the first such broadcast, he later wrote: ‘Milton said that when the nightingale sang, silence was pleased. So in the song of the nightingale, we have broadcast something of the silence which all of us in the busy world unconsciously crave and urgently need.’

In the silence of lockdown, many Brits will have enjoyed their first encounter with what folk singer Sam Lee describes as the little bird’s ‘language of enchantment’ in this delightful little miscellany of nightingale fact and fiction.

As Lee reminds us, the nightingale is a global citizen. The birds spend the winter in north west Africa before flying 6,000km back to the UK each spring.

The males arrive first, usually settling within 200 m of the site of their previous summer’s nest. Nightingales are reclusive birds, preferring to nest away from built-up areas, in low, dense scrub. Hawthorn, blackthorn, willow and wild rose offer a protective ‘thorny jacket’ that’s difficult for predators such as crows, stoats, weasels and squirrels to penetrate.

It’s the cock who sings, to attract a hen. She will listen to a variety of males in the darkness, then return in the day to inspect the nests of preferred mates. She may then be treated to a courtship dance, involving a softer song and a fanned tail.

The hen will then build a second nest, closer to the ground in which to lay four to five pale green eggs. Both parents will feed the chicks until they fledge. Once they become parents, the nightingale — like the human — apparently sings a ‘less sublime, more garish’ song. 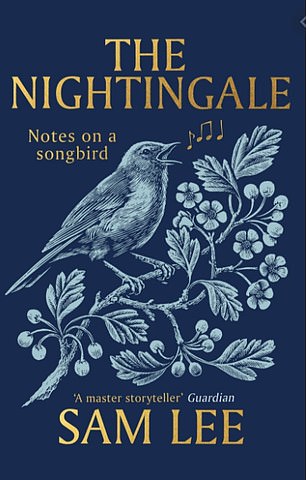 Most of us know John Keats’ Ode To A Nightingale (1819), but Lee says there are also 570 folk songs with the bird in their title, more than any other species apart from the blackbird. While the more familiar blackbird makes 100 different sounds, a nightingale can make about 1,500, arranging them in more than 250 musical phrases. If people are respectful, then the shy birds will sometimes join in with human music as they did with Beatrice Harrison’s cello.

But in Highnam Woods in Gloucestershire, where Lee runs ‘Singing with Nightingales’ events, ornithologists counted just 12 males in 2017, six in 2018 and only three in 2019.

If the rapid decline in numbers was caused by climate change, then the birds would be moving North, not vanishing. So habitat loss is the likely cause. Lee suspects muntjacs are destroying these nesting areas.

The small, Indian ‘barking deer’ (introduced in Bedfordshire in the early 20th century and now widespread across the UK) are ripping and chewing their way through nightingale habitat. With no natural predators, he says Britain’s deer population is out of control.

With nightingales now on the UK’s Red List, meaning they are at risk of extinction here, Lee fears its ancient song of rebirth ‘has become a requiem’ and they will likely vanish from the UK within the next 50 years.

For those of us yearning to hear a nightingale sing in an English wood while we still can, Lee offers a list of sites across the South East, mostly in Essex, Sussex and Suffolk.

He recommends creeping out in your softest clothing — ‘no crisp packet jackets!’ — and trying not to use a torch. He advises the bravest song-seekers to remove their shoes and creep barefoot into the woods, promising an ‘electrifying experience that will change the way you move and hold your body’.

‘Are these not times’, he asks, ‘in which we need to fill our hearts with the richness our land offers?’