Ronald Reagan, the former star of “Bedtime for Bonzo,” was having trouble gaining traction in the presidential race he hoped to upend. It was 1976, and as the new candidate shook hands in diners, gymnasiums and town fairs, he hit upon a crowd-pleaser, a riff that caught the crowd’s attention by playing to its fears — call it a 1970s version of “Build That Wall.”

“In Chicago, they found a woman who holds the record,” Reagan said in his folksy baritone during a luncheon in Asheville, N.C. “She used 80 names, 30 addresses, 15 telephone numbers to collect food stamps, Social Security, veterans’ benefits for four nonexistent deceased veteran husbands, as well as welfare. … Her tax-free cash income alone has been running $150,000 a year.”

On audio recordings from the time, you can hear the audience gasp.

Reagan didn’t use the phrase “welfare queen” — he left that to the headline writers. His euphemism was “the woman in Chicago,” but the message was clear.

“The audience knew what this welfare-swiping villain looked like,” Josh Levin writes in his new book, “The Queen.” “She was a lazy, black con artist, unashamed about cadging the money that honest folks worked so hard to earn.”

A new political trope was born, and the specter of the “welfare queen” has been with us ever since, a cudgel hauled out by right-wing candidates and cable news hosts to demonize the poor and justify limiting public benefits.

But there’s a wrinkle to the story: Reagan’s “woman in Chicago” was a real person, a mother named Linda Taylor, who had indeed been in the headlines for welfare-related “irregularities,” let’s call them. Taylor’s story has long been forgotten, if it was ever widely known, and many have long assumed that the “welfare queen” was an urban myth. With “The Queen,” Levin, the national editor at Slate, attempts to excavate the gritty, smudgy truth beneath the political rhetoric.

I settled in, expecting to read a story that punctured Reagan’s indelible stereotype. Surely, the “woman in Chicago” would turn out to be an honorable, hard worker who had been unfairly maligned and chewed up in the maw of presidential politics.

Nope. Levin’s book is much stranger than that because here’s the thing: Linda Taylor actually was a scam artist who cheated the system quite prolifically and without the slightest compunction. She turns out to have been a scammer of historic proportions, a woman so protean that she had gone by at least eight different names by the time she was 22. She was, apparently, a kidnapper. Levin even suggests that she committed murder.

This presents an interesting conundrum. Reagan’s stereotype was sweeping and offensive, but the woman at the center of it did drive a Cadillac and wear fur coats and take advantage of state programs intended to help the poor. What’s a writer to do? Levin makes no excuses for Taylor and instead rushes in, magnifying glass in hand, to the tornado that was her life. 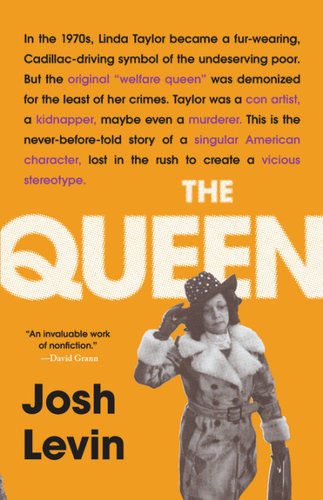 Taylor made a cameo on the national stage in 1974, after George Bliss of The Chicago Tribune wrote a series of articles about her case and headline writers dubbed her the “welfare queen.” “The Queen” contains so many strange events that it doesn’t come as a giant surprise that a detour into the tragic life of Bliss, a Pulitzer Prize-winning journalist, ends with him killing his wife and then committing suicide.

Another author would have used the “welfare queen” as a jumping-off point to explore stereotypes, welfare politics and political rhetoric. Levin addresses all that, but his real goal is to put a face to Reagan’s bogeywoman, tracking every alias, every scam, every duped husband and every dodged arrest. He presents Linda Taylor not as a parable for anything grand, but as a singular American scoundrel who represented nothing but herself.

Levin first wrote about Taylor in a long article for Slate in 2013. In “The Queen,” he tracks her from her birth in 1926 in the wonderfully named Golddust, Tenn., to arrests in Seattle and Oakland, a possible murder in Chicago in 1975 and a nursing home in Tampa. And there’s much, much more.

Part of the fun of Levin’s book is burrowing inside his obsessive quest. He tracks down vintage court transcripts, old property deeds, marriage licenses, handwriting tests, yellowed police records, ex-husbands of former roommates. What emerges is a quite unsettling picture of a woman who in Levin’s telling seems to have no conscience and no morals, no loyalty to her own children or to any of her many, many husbands. Her crimes are so sprawling and confusing that at times she seems almost like a Keyser Söze master villain. There are hints of buying and selling children on the black market. There’s a sickly woman who winds up dead shortly after Taylor befriends her.

At various points, Taylor comes across as mentally ill, pathological in her lies and perhaps unable to distinguish what’s real from what’s not. At other times, Levin suggests that she seemed to know precisely which lever to pull, which name to use, which tragedy to invoke, in order to get what she wanted.

Although “the welfare queen” became a way to demonize black women, Taylor is such a phantom that even her race is a matter of debate. She was listed as white on the 1930 census, white and Mexican on a 1945 arrest report, and Hawaiian during a 1946 arrest. According to Levin, she was most likely the product of her white mother’s relationship with a black man. Whatever the case, Taylor spent most of her life changing her race, along with her name, as often as it suited her.

Reagan failed to win the Republican Party nomination in 1976 but he went on to win the presidency in 1980 and continued to use the story of the “welfare queen” while in the White House. Once in office, he gutted welfare and a million people lost their food stamps.

So, after all this, who was Taylor, really? What was she like to talk to? What was she after? Through dogged reporting, Levin succeeds in building a timeline of her life, but she remains tantalizingly out of grasp, always one step ahead of our detective reporter who is left shuffling receipts from the wastebasket and scanning the horizon for her shadow.

Taylor’s story is so tangled and baroque that it makes you wonder about all those other semi-anonymous humans who have been drafted to serve as political metaphors. Who was Joe the Plumber, really? Are we certain J.F.K.’s gravedigger checks out? Is it time for a biography of Khizr Khan, the gold star military father from the 2016 convention?

Linda Taylor, or whatever her name was, died in 2002. Levin argues that she belongs in the pantheon of American grifters, up there with P. T. Barnum, Huck Finn’s Pa and Anna Delvey — characters who captivate us with promises that we will learn something about ourselves, if only we could catch them.

Sam Dolnick is an assistant managing editor at The Times.

New & Noteworthy, From Schopenhauer to the Pope

A Border Novel That Captures Immigrants in All Their Humanity