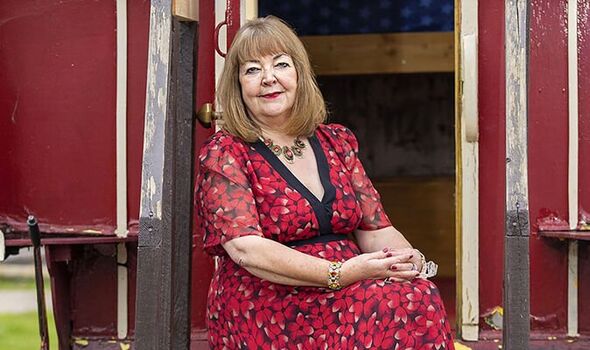 Jessie Keane was three years old when her Romany grandmother first predicted she would be a writer. Examining the toddler’s palms, “Grand”, as she was known to all, was in no doubt. “She’s got a strong writer’s fork,” she decreed. “Two, in fact. She’s not only going to write, she’s going to be famous for it.”

The much-loved matriarch had, the family believed, the gift of “the sight”. She had insisted that Jessie should be born in her traditional gypsy bow-top caravan, and taught her grand-daughter, the youngest of eight children and the only girl, how to read cards.

“She lived with my parents but refused to give up her van and only came indoors to use the facilities,” recalls Jessie.

For many years, it looked as if the trusted fortune-teller had got it all wrong. Jessie’s life did not pan out as predicted in many ways. When she was 10, her father was diagnosed with lung cancer.

A top student who was expected to sail through her 11-plus, she failed the exam and went to a large secondary school where she was bullied mercilessly.

After her father died, their comfortable house in Hampshire was seized by the bank and the family ended up living on a rough council estate. “There were bricks coming through the windows and constant taunts,” she recalls.

She left school at 15, with one O-level in English, and fled to London, where she washed dishes in a Soho restaurant and wandered around the seedy bars and clubs, making friends with a colourful cast of dodgy characters.

“I was so young,” she says. “And I was becoming increasingly aware of the people my friends were mixing with. My first boyfriend was a car thief who quickly got himself arrested and sent me begging letters from prison.”

Two failed marriages followed and by her mid-forties, she was living in a council flat and taking whatever work she could get. “I worked as a bacon slicer, trainee dental nurse, sweeper-upper in a hairdressing salon ‑ all were as unfulfilling as they were brief.”

Remembering Grand’s prophecy all those years ago, Jessie sold her old wedding dress and used the money to buy a second-hand typewriter, but her first attempts at writing novels did not go well.

Sitting at her kitchen table, shivering in an overcoat, with no money left for the gas meter, she kept bashing away as the pile of rejections from agents and publishers grew ever taller. Soon she had ten “chick-lit” novels that no publisher seemed to want.

“I kept sending manuscripts; they kept bouncing back,” says Jessie, now 59. “I knew I was supposed to be a writer, so it was desperation really. I was so sick of getting everything rejected ‑ sometimes by a hairsbreadth.

“I had so many near misses. Eventually an agent said, ‘Why not write straight crime? It would suit your voice better’.”

It was life-changing advice and while watching the 1990 film, The Krays, Jessie came up with the plot of her debut crime thriller.

“I started to think about what it would be like to be a woman in that world, and my early experiences in Soho came to mind. At the same time I went to a tarot card reading and drew the death card ‑ this is a sign that something monumental is going to happen.”

“My agent phoned me up and said, ‘Are you sitting down?’ She then told me that the manuscript had got me a three-book deal for a six-figure sum. I was poleaxed, but so relieved. It was lovely to finally have it happen. I’d been working for years for this moment.”

Now Jessie is a multi-million copy bestselling author, known in the business as the Queen of the Underworld, whose 16th novel, Diamond, was published this month.

Quite a feat for the daughter of a Romany woman who could barely read or write. It was her father, a successful engineer, who inspired her love of books, with his thriller-reading habit.

“His interest kickstarted something in me,” Jessie says. “The desire to write seemed to start very early.”

But while she gets the passion that turned her life around from her father, she is intensely proud of her mother’s gypsy heritage. It was a chance meeting that brought the odd couple together ‑ that and a love of boxing.

“A friend had taken my father to a young farmers’ dance where he met my mother, a dark-haired gypsy girl,”

Jessie says. He was interested in boxing and had done a bit of fighting himself as a keen amateur, so she invited him to see her cousin compete against one of the local bare-knuckle champions.

“Gypsies love challenges, who is the strongest, the bravest and so on. Her cousin won.” Stories about fights like this formed part of the fabric of her Romany family.

“The blood flying, the betting, the pulled punches and the thrown contests, they stayed with me.” And they inspired her 12th novel, Fearless, which was published in 2018; an epic tale about a family of bare-knuckle fighting gypsies and their ambitious womenfolk.

“Gypsies are strong, resilient and tough as old boots. It’s an honour to be one of them,”

Jessie says. Her latest novel features Diamond Dupree, the daughter of a gangland family, who flees London in the early 20th century en route to Paris where she becomes an artist’s muse, before the lure of her family draws her back into the underworld. But then she falls in love.

“My books are always very much a sea-tof-the-pants thing,” she says. “Some writer friends systematically plot everything from start to finish. I don’t do that.

“I just sit at the computer and I get a main character in my head who arrives from nowhere. Then I just feel my way forward. At about 40,000 words I realise I’ve hit on a new book. Until then I don’t have a clue.

“It’s almost like an out of body experience; a bit like a sportsman or composer who gets ‘into the zone’.

“My characters develop as I write, reacting to other characters they encounter. I can scarcely believe my books are on the bestseller list.

“You write one book then realise you’ve got to produce another good one, then another, but your belief in yourself starts to grow,” says Jessie, who confesses to relief once final edits are completed. Then, within two or three weeks, she’s itching to begin her next novel.

Jessie lives with her partner Cliff, who used to be a senior BT engineer. Her success bought them a “nice house” in the South Downs National Park with a swimming pool, but they have recently downsized.

“I write Monday to Friday which is good because I’m basically unemployable. I love being on my own. So I’ve achieved what I wanted and I can’t imagine stopping.

“My childhood gave me a richness that gave me something to write about, and I do draw on that a lot.”

Was the man who invented the movies murdered by his RIVAL?