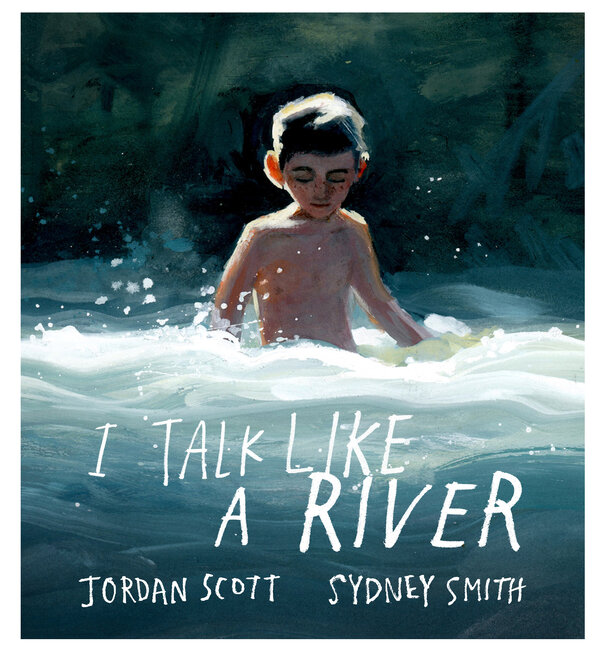 I TALK LIKE A RIVER, by Jordan Scott, illustrated by Sydney Smith. (Neal Porter/Holiday House, $18.99.) A boy who struggles with stuttering (as does the author, a Canadian poet) finds relief in a trip with his father to a nearby river, where he sees that turbulence and eddying are part of the natural flow. Smith’s immersive illustrations richly convey the boy’s sensory experience as he swims toward self-acceptance.

IF YOU COME TO EARTH, by Sophie Blackall. (Chronicle, $18.99.) “Dear Visitor from Outer Space,” the child narrator begins, “if you come to Earth, here’s what you need to know.” Blackall delivers on the promise: Her wondrous book seems to contain multitudes — the world’s every river, flower, person, cruise ship and bottle cap.

THE LITTLE MERMAID, by Jerry Pinkney. (Little, Brown, $18.99.) In Pinkney’s vivid reimagining of Hans Christian Andersen’s classic fairy tale, the mermaid befriends a human girl instead of pining over a handsome prince, and all the characters, human and mermaid, are Black.

OUR LITTLE KITCHEN, by Jillian Tamaki. (Abrams, $17.99.) Based on Tamaki’s experience volunteering at a small community kitchen that feeds the hungry, this color-saturated, mouthwatering whirlwind of a book bursts with energy from the moment its diverse group of characters starts chopping and slicing, whisking and whipping.

OUTSIDE IN, by Deborah Underwood, illustrated by Cindy Derby. (HMH Books for Young Readers, $17.99.) Underwood’s quietly profound text and Derby’s lush art provide a homage to nature, and a comforting reminder that Outside will be there for us when we’re ready. “I’m here, Outside says. I miss you.”

A STORY ABOUT AFIYA, by James Berry, illustrated by Anna Cunha. (Lantana, $17.99.) This joyous celebration of childhood, culture and place by the Jamaican poet (who died in 2017) follows a young girl named Afiya — “health” in Swahili — whose summer frock “collects” what she sees as she dances across an island in motion. Each airy spread is a fresh canvas for its Brazilian illustrator, just as Afiya’s dress is newly washed each morning.

THE STRANGE BIRDS OF FLANNERY O’CONNOR, by Amy Alznauer, illustrated by Ping Zhu. (Enchanted Lion, $18.95.) This strangely beautiful art object of a book traces O’Connor’s first forays as a writer to an outsize fascination with the chickens in her childhood backyard. Alznauer pairs a grounded, authentic vernacular with a lyricism that takes flight, while Zhu’s depiction of odd human proportions against brilliant brushstroke plumage enchants.

THERE MUST BE MORE THAN THAT! by Shinsuke Yoshitake. (Chronicle, $18.99.) When a little girl’s brother tells her “our future is doomed,” in this entertaining yet serious story drawn in Yoshitake’s signature cartoon style, she runs in a panic to her grandmother, who helps her to imagine many possible futures, rather than to think only in terms of good and bad scenarios.

THE WANDERER, by Peter Van den Ende. (Levine Querido, $21.99.) Danger, magic, surprise and awe abound in this masterly, wordless debut about a paper boat’s nighttime sea journey into the unknown.

WHEN YOU LOOK UP, by Decur. (Enchanted Lion, $29.95.) This moody watercolor-soaked story of an introvert’s creative awakening by the self-taught Argentine artist Guillermo Decurgez (known as Decur) begins on “moving day,” as a boy who believes the world exists only inside his cellphone finds a mysterious notebook inside the secret compartment of a desk in his new room.

YOU MATTER, by Christian Robinson. (Atheneum, $17.99.) An anthem to self-worth that’s also about the history of life on Earth, and in 107 words somehow covers loneliness, death and rebirth.

BECOMING MUHAMMAD ALI, by James Patterson and Kwame Alexander, illustrated by Dawud Anyabwile. (Jimmy Patterson, $16.99.) Cassius Clay’s kinetic boyhood — depicted through prose, poetry and illustration — is the prism through which this uplifting novel casts the myth of the legendary boxer.

CHANCE: Escape From the Holocaust, by Uri Shulevitz. (Farrar, Straus & Giroux, $19.99.) This touching memoir of the author’s flight with his parents, beginning at age 4, from Warsaw to Russia to Turkestan is illustrated with his own art, including astonishing childhood originals.

CLASS ACT, by Jerry Craft. (Quill Tree, $22.99.) A Black student from the Co-op City section of the Bronx attends a private middle school in wealthier Riverdale in this moving and often funny graphic novel about the convergence of an awkward age (13 to 14) with another awkward age (America’s racial reckoning).

LORETTA LITTLE LOOKS BACK: Three Voices Go Tell It, by Andrea David Pinkney, illustrated by Brian Pinkney. (Little, Brown, $17.99.) Sparkling with Southern diction and rhythms, and peppered with poems and songs, this novel composed of read-aloud monologues follows three generations of children in one fictional Mississippi family as they survive hardships from sharecropping to voter suppression.

MAÑANALAND, by Pam Muñoz Ryan. (Scholastic, $18.99.) In this magical realist novel set in a “land of a hundred bridges” that lies “somewhere in the Américas,” an 11-year-old boy whose mother disappeared when he was a baby explores haunted ruins that once hid refugees from a neighboring dictatorship.

THE SILVER ARROW, by Lev Grossman. (Little, Brown, $16.99.) This eco-fable by the author of the adult novel “The Magicians” tackles climate change with poignant whimsy, via a magic steam train and talking animals.

WAYS TO MAKE SUNSHINE, by Renée Watson. (Bloomsbury, $16.99.) Like Beverly Cleary’s Ramona Quimby, who inspired this heart-wrenching yet delightful new series, the Black fourth grader Ryan Hart is a bright, imaginative girl who specializes in “making a way out of no way.”

WE DREAM OF SPACE, by Erin Entrada Kelly. (Greenwillow, $16.99.) Kelly moves gracefully between small-scale middle school dilemmas and galaxy-size existential questions in this lively, tender novel of three siblings adrift in a dysfunctional family as they await the shuttle Challenger’s launch.

WHEN STARS ARE SCATTERED, by Victoria Jamieson and Omar Mohamed. (Dial Books for Young Readers, $20.99.) This riveting graphic novel chronicles the young Omar’s real-life experiences during the 15 years he and his little brother spent as Somali refugees in the U.N.-run Dadaab camp in Kenya.

BEFORE THE EVER AFTER, by Jacqueline Woodson. (Nancy Paulsen, $17.99.) A boy struggles to move forward with his life as his pro football star father’s memory fades in this elegiac meditation on loss and longing, told mostly in verse.

DRAGON HOOPS, by Gene Luen Yang. (First Second, $24.99.) Full of insight about race and ethnicity, this graphic novel intercuts the thrilling wins and crushing defeats of one high school team with basketball’s own turbulent history.

EVERYTHING SAD IS UNTRUE (A True Story), by Daniel Nayeri. (Levine Querido, $17.99.) A modern-day Scheherazade uses storytelling to survive the fifth grade in Nayeri’s autobiographical novel about his family’s journey from Iran to America.

THE TALK: Conversations About Race, Love & Truth, edited by Wade Hudson and Cheryl Willis Hudson. (Crown, $16.99.) These essays, stories, poems, letters and illustrations work to prepare children for a world that can be bewildering and hostile, while also making plain that the hard conversations we all need to have about race are part of a broader national reckoning.

THEY WENT LEFT, by Monica Hesse. (Little, Brown, $17.99.) At the end of World War II, this searing novel’s Polish heroine, who spent her adolescence in concentration camps, sets out to find her younger brother, the only other member of her family who was not sent to the gas chambers.

The night we lost the girls, and everything changed