It was another Covid-era Wednesday night, another Zoom call, but for the entire hour, nobody spoke.

None of the attendees even looked at each other. All eight of their heads were tilted down, their pens and the corners of their notebooks occasionally bobbing into view of the laptop cameras.

These writers were gathered, virtually, for their weekly accountability session, a variation on the traditional writing group that replaces discussions and feedback with focused quiet time. Some of these informal gatherings have flourished as people who once shied away from writing groups — because of the time commitment, commute or intimidation factor of a room full of aspiring authors — are finding that the pandemic has lowered the barriers to entry.

“The idea of a writing community in New York is very scary,” said Hannah Pasternak, 25, an editor at Self magazine who started the group last March, around the time that many offices in New York City were closing because of the pandemic. “You feel like everybody is better than you, or everybody has a book deal and you don’t, or everybody is published in X magazine or Y magazine.”

She was inspired by a fiction writing class she took at the 92nd Street Y in January 2020, which helped her realize that not all writing spaces needed to feel competitive. When the pandemic hit and she couldn’t take another class in person, she posted on Instagram that she would be writing for an hour that Wednesday night and invited anyone to join her.

Now there are 100 people on her mailing list. The number who attend fluctuates each week, but they’ve met every Wednesday for nearly a year.

“There are always going to be a million people in New York wanting to write a book. It’s never going to change, so I had to change my perspective,” Pasternak said. “I just like that it’s a noncompetitive space.”

For some, joining a group isn’t about trying to write a book or pursue a career in writing. Hannah Zweig, 26, a client solutions manager at Nielsen, minored in creative writing in college but didn’t keep up with it until the pandemic gave her a freer schedule. She joined Pasternak’s group in April, at first using the sessions to journal about her feelings and experiences around the pandemic, though she now mostly uses the time to write poetry.

“I honestly hadn’t done a lot of writing since college, and it made me kind of sad,” Zweig said. “I had no reason to write and to stretch myself in that way, so I think it’s reignited my ability to write and my appreciation for good writing.” 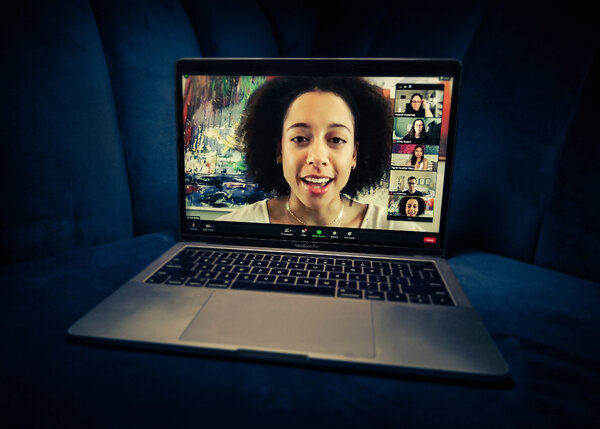 The number of writing groups and people involved with them are difficult to count because formats and membership vary so widely, but participants said the groups have been thriving over the past year. Some of them are led by one or a few people, while some are organized by the group. Many are free, though some teachers lead groups and charge for them. Some are focused on “accountability” and keeping members writing, while others are more reflective and conversational.

Groups offering silent writing time are common, and sometimes tied to institutions. London Writers’ Salon and Gotham Writers Workshop charge $100 to more than $400 for some of their classes, but they also run free hourlong writing sessions. But over the last year, many people have also joined or formed writing critique groups, where writers bring their own fiction, nonfiction or poetry to read, and the group discusses what does or doesn’t work about the pieces. For groups that aren’t run by organizations, most members learn about them by word of mouth.

Mira Dayal, 25, an artist and curator in Brooklyn, had wanted to work on writing fiction for years, but gallery openings and other arts events consumed her evenings.

That came to an abrupt stop last spring, and by September she had joined a critique group with six other writers, after hearing about it from a friend of a friend. Dayal, who is Indian-American, is also in a group for writers who are Black, Indigenous and people of color, where members bring readings to discuss and then do writing exercises and responses.

The regular meetings weren’t something she could previously fit in her life, she said. “Now, I have a less regular schedule, and I’m not going anywhere, and I don’t have that half-hour of subway traffic, so I just feel like it’s a smaller commitment.”

Dayal also finds the remove of technology helpful when she feels vulnerable about sharing her work.

“The screen is a way of creating some kind of distance between people,” she said. “Everyone is more focused on the document on the screen than the bodies in the room, so it makes it easier to feel like you have a sense of distance from the person, or you can focus on the writing or not thinking as much about a social space.”

For Maureen Sullivan, 55, an adjunct English professor in Vancouver, Wash., a long commute had discouraged her from joining a writing group.

She had tried one in Portland, Ore., but the 90-minute round trip every week was too much for her. “I used to work in Philly, and I spent a lot of my life in traffic, like a caged animal,” she said.

Sullivan rejoined the group, which charges attendees per session on a sliding scale, and is now a regular virtual participant, though she said that in an ideal world, she would want a group with online sessions and occasional in-person ones.

“I do miss the human-to-human contact, but I’m not on the road. There are pluses and minuses to all of it,” she said. “There’s none of those random conversations or little moments before and after class when you get to know the people a little bit better. We’re all writers, so we write each other lovely emails, but the hybrid for me is ideal.”

But for many, especially people who join groups with no intention of writing a book or pursuing a writing career, having a place to write offers an opportunity for catharsis in a difficult time.

“I also think there’s just a lot of feelings right now,” Pasternak said. “A lot of people are like, ‘Life is short. I have a lot of feelings. I’m going to spend time doing something I enjoy.’ It’s a way to pass the time and to process.”