The actor’s new memoir “Taste” explains how a bout with cancer took his passion for ragù and risotto, but also Cuban-Chinese stews and minke whale, to new heights. 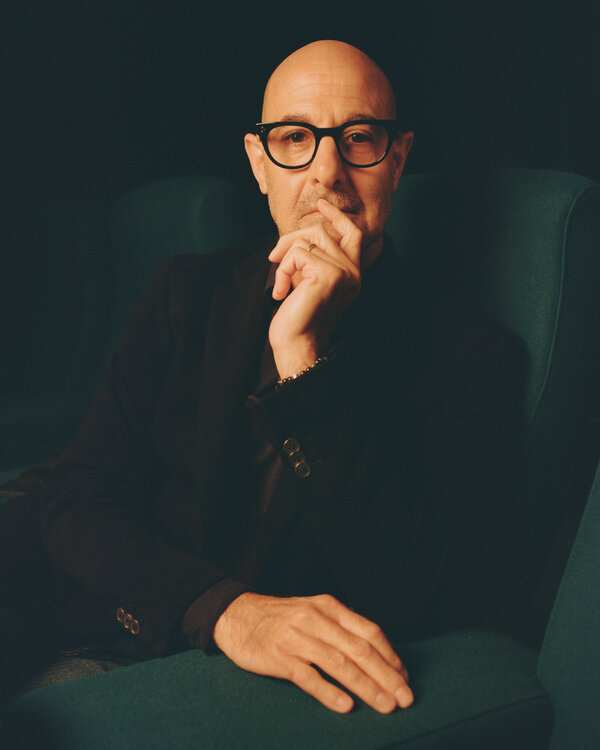 LONDON — About three years ago, the actor Stanley Tucci was strapped to a board in a New York hospital, while he received radiation therapy to get rid of a tumor at the base of his tongue.

A specially made surgical mask had been snapped over his face, so he couldn’t move, and a plastic bite block was inserted into his mouth, with just a small hole for him to breathe.

“It was horrible,” Tucci said in an interview last month.

After three radiation sessions, he started experiencing vertigo and losing his appetite. After a week, anything he ate tasted like wet cardboard “slathered with someone’s excrement.” His mouth filled with ulcers.

Throughout this harrowing experience, Tucci said, he wasn’t afraid of death. He feared losing his sense of taste. “I mean, if you can’t eat and enjoy food, how are you going to enjoy everything else?” he said.

He tells this story in his new book, “Taste: My Life Through Food,” which Gallery Books will publish on Tuesday. It is an unconventional memoir about his love — and occasional hatred — of eating and drinking, reminiscing on his mother’s cooking (“proof that culinary creativity may be the most perfect art form”) as well as the appalling food he’s eaten on film sets.

“The only thing that makes Italian set catering bearable is that wine is always served,” Tucci, 60, writes. “Tragic for a country that is a culinary oracle.”

His bout with cancer comes, surprisingly, at the end of the book. Most of the rest of it portrays the Stanley Tucci who became one of the breakout hits of the pandemic in his six-part CNN series, “Stanley Tucci: Searching for Italy,” in which he charmed his way around his grandparents’ home country, snacking. “The whole thing verges on obscene,” Helen Rosner wrote approvingly in The New Yorker, after describing the “sensory ecstasy” Tucci got from smelling Parmigiano-Reggiano.

Yet when Tucci made that show, he was still recovering from the cancer treatment, he said. “It was hard because I could taste everything, but I couldn’t necessarily swallow.”

At one point, while eating steak florentina, a traditional Tuscan dish, “I had to chew it for 10 minutes to get it down my throat,” he said. Other times, “I just had to get rid of the food,” he said, sounding disgusted with himself for wasting a good meal.

Sharon Stone Is Telling Her Side of the Story