During an extended hospitalization in 2001, when Sharon Stone was being treated for a stroke and a subarachnoid hemorrhage that had bled into her brain, head and spine, she writes that she was visited by her grandmother Lela, who had been dead for 30 years.

“This is where it gets weird,” Stone writes in a new memoir, “The Beauty of Living Twice,” which Knopf will publish on Tuesday. Lela came to convey a warning: “Whatever you do, don’t move your neck.”

It is one of several scenes from her life that Stone, the 63-year-old star of films like “Basic Instinct,” “Casino” and “The Quick and the Dead,” relates with candor and sardonic humor. Despite her long career in Hollywood playing femme fatales and women of mystery — even in recent television series like “Mosaic” and “Ratched” — her memoir is a more episodic account of her life and upbringing, particularly her youth in modest Meadville, Pa., and the indelible but troubled family that raised her there. 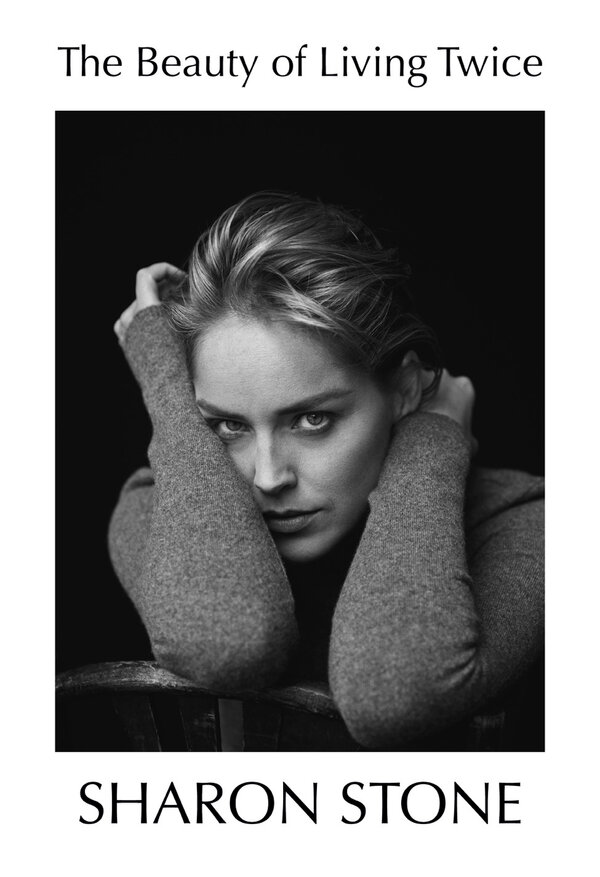 As she explained in a video interview in February, “I believe that the point of my book is that it narrates a rather regular life. I don’t think that my life is exceptional, except that I ended up being a movie star. This book could be written by a lot of other people that grew up in a small town.”

It is a story that Stone often tells in unflinching detail, beginning with the near-death experience that helped inspire her to write the book. “After all this standing on my neck, I could breathe again,” she said. “I could speak again. And I was going to breathe and speak differently.”

She spoke further about the creation of “The Beauty of Living Twice,” the personal experiences that it chronicles and how it encouraged her to reassess herself. These are edited excerpts from that conversation.

From ‘The Beauty of Living Twice’

Why did you decide to write this memoir?

I had gone around trying to get my short stories published and everyone told me, nobody wants to read short stories. I think what they really meant was, we really just want to get up in your private life. I didn’t want to do that at the time. Then my friend Kael [the author J. Kael Weston], who wrote “The Mirror Test,” recommended that his editor Tim O’Connell, at Knopf, take a look. In the meantime, I’d written a letter to Janklow & Nesbit about getting an agent. So Knopf and another book company started offering me deals. I thought I would learn more from Sonny Mehta [the revered Knopf publisher who died in 2019] and Tim. Sonny read my stuff and said that he thought I was his next Irish storyteller.

Did you have a particular writing process as you worked on it?

When I was really close on it, I took two films in New York and every day off, I went to Knopf and I sat in an office and wrote. I’d take some food or order some food up and spend five, eight, 12, 15 hours and just write.

Were you concerned about getting recognized in their offices?

It was sleeting and snowing in the worst of winter. I’d slog down there in my hat and my down coat with my computer and my stuff. Nobody gave a [expletive] about me.

You reveal a lot of intensely personal information in the book about your family and your childhood, including details of how you and your sister, Kelly, were sexually abused by a grandfather. Did you discuss any of this with your surviving relatives before publishing the book?

My sister and I made this decision together. We spoke to my mother and at first she was very stoic and wrote me a letter about how disconcerting all this information was. The whole pious, horrified, I-don’t-really-want-to-talk-about-it-directly kind of thing. Then my sister got loaded when my mom was staying with her and really went for it with my mom. And my mom had a major breakthrough. When I finished the book, I read it to my mother over a three-day period. And I had the flu at the time. I was in bed and she got in bed with me as I finished the book, and then I recorded an hour and a half of her talking. And then I rewrote a lot of the book. That’s when I dedicated the book to her.

Are you apprehensive about people learning these things about you when the book is published?

If you don’t, people will make it all up for you. There’s been pretty much an adult lifetime of people making up my life for me. I’ve had quite a bit of tummy trouble waiting for this book to come. Now I’m going to go out in the most menacing, disruptive, psychologically aggressive period that our world has been in since the ’60s and be vulnerable and open. I understand that I’ll be met with a certain amount of that. But I don’t want to gird my loins. I don’t want to be defensive. I want to prepare to be open and present. Because that’s the purpose of my journey.

There are some violent scenes in the book — a neck injury you received in a horseback riding accident as a teenager; the demise of an uncle who slipped and froze to death — which you find wryly humorous ways to write about. Where does that come from?

I have a little bit of the dark comedy personality. I really do think that we’re meant to meet life with a certain amount of grace, and humor helps that happen. I mean, I have had a unique opportunity in my career to play the bad guy. When I was in school, my acting teacher made me study with this guy who taught you to explore your shadow self. And I was pretty surprised when I got a real good look at myself — I was like, that’s it? You’re not so bad. I’m not afraid of my shadow self. Once you get to know the depth and breadth of your dark side — [Her phone begins to play the ringtone “Happy” by Pharrell Williams. She dismisses the call and, after some laughter, resumes her answer.]

People keep coming to me for those parts because they think I’m good at it, and I think they think I like doing it. I actually don’t like doing it, and I don’t really want to do it, purposelessly, anymore. If I’m going to play something dark now, I need a reason other than just, it’s funny. I find the monkey-on-the-shoulder thing [an eccentricity favored by her character Lenore Osgood on the Netflix series “Ratched”] super funny. I told Ryan [Murphy, who developed the series], we could, when the performance is over, remove the monkey digitally, and the performance would still be so interesting.

Aside from passages in the book where you write about your work on films like “Basic Instinct” and “Casino,” you don’t focus extensively on your movie career. Why not?

[pause] That’s not really what I was working on at this time. They just weren’t a part of what I was really trying to get at.

You also don’t dwell much on your past marriages. You do say, though, that you had to sign a confidentiality agreement with your second husband, the journalist Phil Bronstein.

Yes, before we married, I was asked to sign a particular type of confidentiality agreement.

Did that seem like an unusual arrangement to have to enter into?

I would just say that you’re a very smart guy, you’re a journalist, and if you want to know anything on that subject, I’m sure you can find that out all by yourself.

Do you plan to move away from acting to focus more on your writing?

How will people approach you with these offers now?

Most people know a way to get a hold of me. They can send things to my publicist, who forwards them to me. Of course, I’m on Instagram. I’ve let go of people telling me all the reasons why I cannot work. I think 40 years of too tall, too short, too fat, too thin, too blonde, too brown, too young, too old. Too this, too that. I’m not really interested in the why-you-can’t-return-my-call of it all anymore. So, if a director wants me, specifically, they’ll be able to find me.

Does your book’s title refer a personal sense of resurrection after you survived your health crisis in 2001?

I had that whole white-light experience on the operating table. And when you literally slab out on a table, you have to ask yourself a few questions. I wanted to review my life and ask myself, why did you push yourself without listening to yourself? What part of your listening device got so fractured or broken that you didn’t see where you were headed? The book is the big questions. I’m not the person who’s like, excuse me, pass me the envelope, let’s tear open a corner. I’m the person that likes to blow up the envelope. I’m like, [explosion noise] pffffffft. Push the plunger. Stand in the debris of it and see.

Game of Thrones end: Ghost and The Wall confirm Jon Snow is ‘DEAD’

Brexit would be ‘POWERED through’ by now if Boris had been PM in 2016, says May insider