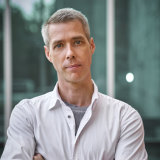 Rohan Wilson is working on a broader, international stage.Credit:

The list of permitted settings for the Australian novel is small — and it mostly has not included the future. Present and past are acceptable, but to stray into the unknown, to speculate, is for younger readers, or genre-writing. But that situation is changing, with climate-change activism throwing down the gauntlet for authors. All sorts of unlikely candidates are now venturing into the world of "what if?".

Rohan Wilson has to be classed as an unlikely, given that his first two novels were historicals set in colonial Tasmania. The Roving Party was a Vogel-winner that won mainland prizes, and To Name Those Lost was awarded the Premier’s fiction prize, the Vance Palmer, in Victoria. Both books were marked by a sparse, intense style, often compared to Cormac McCarthy. With this third novel, Wilson has written his own The Road, a different dance step into a new mode and the near future.

What Wilson brings to climate-change fiction is an ability to integrate research into the novel form effortlessly. He also willingly tackles what for others would be too hard: The Roving Party took no prisoners with the Black War. Here he extrapolates refugee issues, the fate of island nations overwhelmed by sea.

The Maldives is not an obvious choice, but it presents Wilson with a cast of Muslims, the survivors of a tsunami. They are stateless, unwanted — except as a source of cheap labour. Enter a private-prison multinational with a facility in Eaglehawk, Tasmania. Here, setting and history repeat offences against humanity.

What Wilson is doing is more in the futuristic thriller genre akin to William Gibson. Complicating the plot is a romance, between Yamaan, a Maldive student working as a servant, and Rin, whose mother runs the corporation. He survives the tsunami to wash up at Eaglehawk, and she is determined to free him. 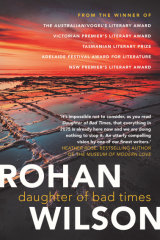 Wilson writes violence acutely, particularly the dramatic set piece of a Launceston tax riot in To Name Those Lost. At Eaglehawk pressure builds in the prison, the difference being that Wilson is not drawing from history but imagining with added gadgets. His future riot is set off by Howland, an agitator with an agenda, with Rin as agent of subversion. All hell breaks loose, the best and worst of humans are revealed.

The setting might be 2074, with Australia’s PM an Asian woman, but little apparently has changed, with an Abetz running Tasmania. Yet Wilson’s move from old Van Diemen’s land to its future is not the stuff of doomsday.

Even with the dark and horrific matter of The Roving Party he admitted some possibility of redemption. Little is truly black and white in Wilson’s work, he works in shades of grey. This tonal palette is suitable for political issues, being their (mostly) true colour. It is less so for the thriller, which prefers black and white, unless truly noir.

Form and inclination are somewhat at odds here, which contributes both to the tension and interest of the book. Another factor is that Wilson makes unusual choices, with the focus on the Maldives and his addressing refugee issues via penal history. He also eschews solarpunk, that sub-genre of a Green and happy future. Yet neither does he take the utterly bleak path of The Road. Hope is permissible for his star-crossed lovers.

The result is a book that while with one foot in Tasmanian Gothic, does represent a personal innovation. Wilson is working on a broader, international canvas, action moves faster, and even the dialogue style differs. Scenes are broken up by extracts from the inevitable Royal Commission, something else about Australia unchanging.

With an experiment of such audacity, the question is whether it ultimately works. The personal answer is: a qualified yes. The research creates credibility, the imagination soars, the characters are not puppets but people.

What might be seen to work against the grand scheme of this future is that in the end the darkness lightens. The evil is averted just a little too easily, via some plot twists and an idiosyncracy of immigration law. But then Wilson is writing the planetary future and to imagine the worst is often more than humanly possible. Instead he hopes for an uncertain best, and who would fault that optimism?