The 1990s saw a crop of new little magazines, including Timothy McSweeney’s Quarterly Concern, Open City and Zoetrope: All Story. But Tin House, a quarterly that began publishing in the spring of 1999, quickly set itself apart, injecting the staid world of literary magazines with humor, adventurous design and an expansive editorial mission that mixed risky work by new and established writers.

This month, Tin House will publish its 80th and final issue, a 400-page testament to its essential role in welcoming unrepresented writers into the literary landscape over the past 20 years. (The issue reprints a tweet from me last year in praise of its track record.)

The magazine came out of the gate hot. “This little book may very well represent the future of literary magazines,” Cynthia Cotts wrote in The Village Voice. She reported that St. Mark’s Bookshop, on East 9th Street in Manhattan, had sold 58 copies of the debut issue in only three weeks, a rate then on par with that of a best-selling book.

Novelty will give any new venture a boost, but Tin House wasn’t just new, it was distinctive. Part literary magazine, part glossy, it merged the design sensibility of a commercial magazine with an eclectic mix of short stories, nonfiction and poetry. Over the years, the magazine has published work by some of today’s best-known writers, often work that couldn’t find a home in other magazines: poems by Stephen King; haiku by Colson Whitehead; writing by Rebecca Makkai; a handful of pieces by Ursula K. Le Guin, who lived just up the street from the magazine’s office in Portland, Ore.

‘We really want to change things.’

The idea for Tin House began with the publisher Win McCormack. It was a longtime dream, he said in an interview last month, to start a literary magazine — not for publishing professionals or academics but for “the many passionate readers,” as he wrote in his publisher’s note in the first issue. He wanted to create a “funkier” version of The Paris Review, and design was an essential element. 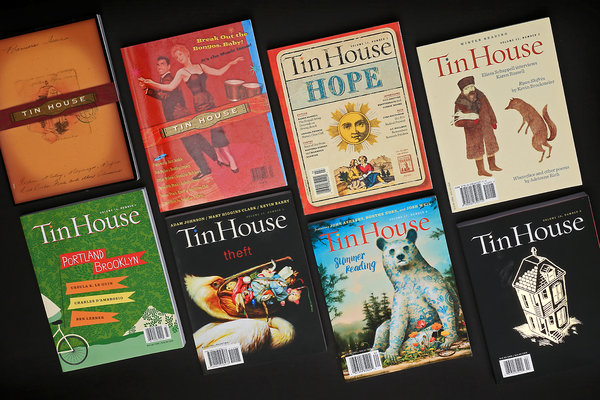 The pretension of older literary journals was to be avoided, right down to the name. McCormack hired Holly MacArthur as his first managing editor (she eventually became deputy publisher). On a lunchtime walk, she proposed “Tin House,” after the metal-sided house McCormack had purchased for the publication’s Portland office. In his search for an editor, he found not one, but two: the married couple Elissa Schappell and Rob Spillman. Schappell was working as a book columnist for Vanity Fair, and her résumé included a three-year stint at The Paris Review under one of its founding editors, George Plimpton. Spillman had worked at The New Yorker and was writing a book column for Details. He had grown up in a community of artists in West Berlin, and witnessed firsthand how mutual support encourages artistic production.

Schappell was initially hesitant to accept McCormack’s offer. “Why would I want to start a magazine when I’m a writer?” she said. But the prospect of making a more inclusive publication won out.

“We were pretty sure Win was going to want a hockey team within five years,” Schappell said, “and so part of our thought was: ‘Here’s this guy. He’s got this money, he’s got some good ideas. We really want to change things.’”

McCormack wanted the magazine to be based in Portland, but Spillman and Schappell, who live in Brooklyn, persuaded him to make it bicoastal.

“Tin House was an opportunity to really kind of stick our thumb in the eye of traditional publishing,” Schappell said. When she told Plimpton that the editors of Tin House intended to publish a new writer or poet in every issue, she recalled that he was skeptical, telling her they’d have a tough time discovering enough new writers of high caliber. But every issue of Tin House, including the last, featured at least one writer in the New Voices column.

“It was important for us right from the start to get not just unrepresented voices, but voices from outside of the sort of standard literary lane,” Spillman said. (Spillman, 54, has remained vocal about the need to support underrepresented voices in literature and his own efforts to ensure a gender balance in the pages of the magazine.)

There’s a “huge world of writers — people of color, transgender people, women — who haven’t been given a fair shake in the literary world,” Schappell, 55, said. “That’s on the editor. You have to go out and find that work,” she continued, “because we all know the only people writing are not white men.”

‘These were the conversations you wanted to join.’

Traditionally, literary magazines have been an archaeological dig of the white male imagination. But reading an issue of Tin House was an act of discovery — of literature’s great variety of styles and subjects and voices. The author Karen Russell first encountered Tin House in graduate school in the 2000s. “I definitely had the impression,” she said, “that Tin House was where the party was at — these were the conversations you wanted to join, the brilliant weirdos with whom you wanted to share a dance floor.”

Tin House’s inaugural issue included Virginia Woolf’s niece, Angelica Garnett, on Michael Cunningham’s Woolf-centric novel “The Hours” and the author Rick Moody on the influence and singularity of Brian Eno’s music. Writers could dilate on whatever they were passionate about, regardless of timeliness. The first issue inaugurated the Lost and Found column, which has appeared in every edition since, in which writers praise underappreciated books.

For fiction and poetry, the editors cast an equally wide net, publishing, among others, stories by James Kelman, David Foster Wallace and the newcomer Christina Chiu, as well as poetry by Agha Shahid Ali, C.K. Williams and Nuar Alsadir.

The second issue kept pace. It featured a previously unpublished story by the Nobel laureate Kawabata Yasunari and a poem by the late Urdu poet Faiz Ahmed Faiz, interviews with Rikki Ducornet and Edward Said, and Jean Nathan’s Lost and Found essay on the children’s classic “The Lonely Doll” and its enigmatic author Dare Wright.

The author Victor LaValle had one of his first stories published in that issue. When he received his copy, he showed it to his mother, “and she could look at it and hold it,” he recalled. “It felt substantial because it looked like a little book.” Tin House, LaValle said, became a home for him. In addition to publishing stories in the magazine, he sent suggestions of writers to watch for.

‘The most exciting book group you could ever imagine.’

Literary magazines, perhaps above all, create communities, not just between readers and writers but between writers and other writers. In the pages of Tin House, Russell was introduced to “some of my favorite stories and a wonderful coven of women writers,” including Lucy Corin, Samantha Hunt and Sarah Shun-lien Bynum. Now a critically acclaimed writer, she still finds Tin House to be a magazine committed to writing above all else. The final issue contains her 11,000-word story “The Gondoliers.” “I was so grateful to be able to publish it at this length,” she said, “with none of the edges sanded off.”

Fiction selections have always been driven by a strong narrative voice, Spillman said. “We pushed toward the more playful.” He noted “dry periods” of mediocre submissions, “but then you get your socks knocked off by an Adam Johnson or a Maggie Nelson or Alice Sola Kim.”

McCormack recalled that the magazine had rejected stories by Günter Grass the month before he won the Nobel Prize. “We had good reason to: They were terrible,” McCormack said. “But if I’d known he was going to win the Nobel, I’d have picked the least objectionable.”

More recently, the magazine turned down Kristen Roupenian’s story “Cat Person,” which went viral when it was published in The New Yorker in 2017. Spillman felt that the man in the story should not have the last word, and that the story ought to circle back to the woman, whose point of view determines the narrative, but Roupenian wanted to keep the ending. Spillman stands by his decision.

The range of work in the magazine was supported, too, by a democratic approach to the editorial process. McCormack, who has an M.F.A. in creative writing, was involved in editorial decisions for the first 10 years, but bowed out to focus on political projects. “It was probably a mistake,” he said. “It made me feel distant, after a while, from the magazine.”

All editors combed through unsolicited submissions. (Before narrowing the submission window, the magazine received roughly 20,000 a year.) The editorial conversations, Spillman said, were “one of the biggest joys of the whole experience. It was like the most exciting book group you could ever imagine.”

From the stacks of unsolicited submissions, the editors published Emma Cline’s first story, when she was 16, and two by Dylan Landis, who was then 41 and making the transition from journalism to fiction, Spillman recalled. McCormack cited Emily Raboteau’s “Kavita Through Glass,” from the spring 2002 issue, as among his favorites. Spillman remembered that the story had been rejected by about 20 other magazines before it found a home at Tin House, and it was later selected for Best American Short Stories.

The endpapers of the final issue are lined with the names of all the writers the magazine published over the years: 1,582 in all.

Stepping away after 20 years

There are three requirements to sustain a literary magazine: money, an enthusiastic commitment of time and energy and good literary judgment. (To money, the former editor of the magazine Ploughshares, Don Lee, once added “zeal, stupidity, fervor, obsessive compulsion, indefatigability, out-and-out insanity, idealism.” Those things don’t hurt, either.)

Tin House later expanded to include a book division — which started in 2002, and has published writers including the poet Morgan Parker and the novelist Kristen Arnett — and the Tin House Summer Workshop, a weeklong festival of ideas and readings pairing established writers with up-and-coming ones. These operated in conjunction with the magazine to deepen Tin House’s mission and expand its ecosystem of writers. Both the book division and the workshop will continue.

In the case of the magazine, the third requirement was never in short supply, but the first two had run their course. For McCormack, also the editor in chief and chairman of The New Republic, the magazine was expensive to keep going, and Spillman wanted to end his run while he was still excited about it. (Schappell stepped down from the top of the masthead shortly after the first issue to pursue her own writing, but continued to find work for the magazine as editor at large.)

“I didn’t want to get to a point where I was unable to be surprised or I resented the work in any way,” Spillman said. After the release of the final issue, he plans to spend 10 days touring in a “bookmobile” from Brooklyn to New Orleans in conjunction with the literary arts nonprofits House of Speakeasy and Narrative 4.

Even as he was wrapping up the final issue, Spillman was as optimistic about literary magazines as he had been in 1999. “Twenty years ago I believed that stories, poems and essays could build bridges and save lives,” he wrote in his final editor’s note. “I still believe this.”

Nicole Rudick is an editor and writer, and was managing editor of The Paris Review for eight years. Follow her on Twitter: @nicolerudick