I was glad to see your feature “The 50 Best Memoirs of the Past 50 Years” in the July 7 issue, and to see Vivian Gornick’s “Fierce Attachments” stand beside better-known books. Great memoirs combine the strengths of storytelling, including character development, prose style and dramatic tension that make readers keep reading, with the social context, self-awareness and hard judgment calls that writing about ourselves demands.

My major disappointment is your omission of Tara Westover’s “Educated,” a thoughtful and beautifully crafted book that does all the things I mentioned above and more. It belongs on any list of best 50 memoirs, as I’m sure many readers agree.

I’m sure I will be only one of many to point out the omission of “Just Kids,” by Patti Smith, on your list.

Honestly, how could you not include “Just Kids,” by Patti Smith?

The list of the 50 best memoirs of the past 50 years in yesterday’s Book Review was interesting, and I was pleased to see some of my favorites — like “Country Girl,” “This Boy’s Life” and “Angela’s Ashes” — on the list. But you missed two exceptional memoirs, both of which deserve to be on that list. “When I Was Puerto Rican” (1993), by Esmeralda Santiago, is a beautifully written, heartbreaking and inspiring story that begins with how to eat a guava in Puerto Rico and moves with Esmeralda to the bewildering world of New York City. I read it in the 1990s and I still remember parts of it. And Bruce Springsteen’s brilliant “Born to Run” provides vivid pictures of growing up poor, putting a band together and making it, all in Bruce’s unique voice, not that of some ghostwriter.

In your collection of important memoirs, I was surprised to see not a single work that was explicitly about the experience of exile, a condition that much of the world’s population is experiencing today. May I suggest one of the better ones, “Feeding on Dreams: Confessions of an Unrepentant Exile,” by the acclaimed Chilean, now American, writer Ariel Dorfman. In it, Dorfman recalls his years of exile during the dictatorship of Augusto Pinochet. Part memoir, part political tract and part meditation on the nature of exile, Dorfman relates a wrenching exposition of his life on the edge in exile, often in real fear for his own life, as well as its effect on his family and his ultimate decision to remain in the United States even after the fall of the dictatorship.

I am amazed that “Long Walk to Freedom,” by Nelson Mandela, didn’t make the cut for the top 50 memoirs. I’ve read many of the books on the list; none of them are as memorable to me as Mandela’s description of growing up in a segregated South Africa and leading his country to a new era.

I am in critical sympathy with your selection of many, if not most, of the memoirs that comprise “The 50 Best Memoirs of the Past 50 Years,” as well as the difficulties of embarking on such an enterprise. That said, it is stupefying to me that Art Spiegelman’s “Maus,” a landmark, genre-redefining graphic memoir, without which there would be no “Fun Home” or “Persepolis,” was not included on your list. Spiegelman employed a popular cultural medium — comics — to render the unassimilable experience of growing up in postwar America as a child of Holocaust survivors. Like Vivian Gornick in “Fierce Attachments,” who had to create a grammar for her world so as to understand the roots of the traumas that shaped her, Spiegelman invented a language capable of reflecting his own incongruous identity.

The writer is a professor of comparative literature at Sarah Lawrence College.

I cast my vote for a glaring omission to the list of best memoirs: “A Drinking Life,” by Pete Hamill. This best-selling memoir by the famed newspaperman, journalist, essayist and novelist is clearly deserving to be on the honor roll. Alcoholism and writers have forever been a romantic part of literary lore. The acclaimed author quit drinking cold turkey on New Year’s Eve, 1972. Hamill weaves a powerful account of addiction and remarkable recovery, but unlike Poe, Hemingway, Steinbeck and Faulkner, the Brooklyn native was successful in defeating his demons. Hamill has become our modern-day O. Henry and the living embodiment of New York City.

I’m surprised that Lillian Hellman’s “An Unfinished Woman” (1969) or “Scoundrel Time” (1976) was not included among the 50 best memoirs. The former contains her eloquent tribute to Dashiell Hammett, “my closest, my most beloved friend.” In the latter, she recalls her encounter with the House Un-American Activities Committee (HUAC) in which she agreed to testify about herself but not about others, as she wrote in her letter to the committee: “I cannot and will not cut my conscience to fit this year’s fashions.” Hellman may have been occasionally inaccurate, but she knew how to turn a phrase. 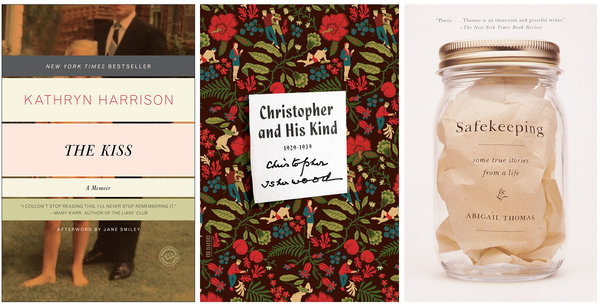 “Christopher and His Kind,” by Christopher Isherwood, published in 1976, is one of the most truthful, entertaining and historically pertinent memoirs of the last 50 years. How could it not be included in the list? Decades ahead of his time in his fiction, Isherwood created a memoir that transformed the very formula into something new.

May I add one to your “50 Best Memoirs of the Past 50 Years”? Annie Dillard’s “An American Childhood” (1987). It’s an ordinary childhood that, as memorialized by this great author, could only come across as weird and wonderful. I read it first in 1988, and I keep it on my nightstand. (Actually, I have all of her books on my nightstand.) It has the pleasant, fresh feel of an always-open invitation: Welcome to my life. Perhaps you will recognize it. Who wouldn’t? Who grew up in the 1950s, in the Midwest or the Northeast, and does not remember ice-skating down the neighborhood streets in winter? Polio. Catholic school. Notebooks of jokes. Chesterfields. Short and surprising, “An American Childhood” is worth rereading, more than once.

Most of my favorites — by Sally Mann, David Wojnarowicz, Lucy Grealy, Tobias Wolff, Joan Didion — are on your list. But you omitted Abigail Thomas, whose three memoirs remain on my bedside table because I read them again and again. “Safekeeping” is the only memoir I know of that does away with any sort of chronological order. “A Three Dog Life” breaks your heart, and “What Comes Next and How to Like It” mends it. Your readers deserve to know about Abigail Thomas, if they don’t already.

I was pleased to see “All God’s Dangers” included on the memoirs list. When I was growing up in the 1970s, my family lacked a television set (partly out of poverty, and partly out of principle). As a result, I read from one end to the other of my mother’s packed bookshelves, and Ned Cobb’s words (as related to Theodore Rosengarten) made an indelible impression on me. Forty years later, I often think of his stories, and they were part of my inspiration when I made the documentary film “Sharecrop,” which features stories from 10 former sharecroppers.

“All God’s Dangers” reveals so much about the hopes and self-sufficiency of African-American farmers in the first half of the 20th century, about land loss due to mechanization and discrimination in U.S.D.A. lending, and about how the justice system is bent to do the work of white supremacy. If anyone wishes to understand our current social situation, I urge them to read this masterwork of oral history.

I have been teaching seminars on memoir and spiritual autobiography at the undergraduate and graduate levels for the past 25 years. Having gone through your list, there is much upon which we heartily agree; some selections I would have elected not to include; and, delightfully, a few new titles for me to explore.

But how on earth could your editors have omitted Kathryn Harrison’s “The Kiss”? Breaking silence of the unspeakable with stunningly controlled and impossibly elegant prose; interrogating, with unflinching honesty, the role of surrender and the reconstitution of a life after almost unimaginable, primal, psychic devastation, “The Kiss” is a memoir that, as far as I and many of my students are concerned, forever shifted — and elevated — the benchmarks for this genre.

The writer is an assistant professor of religious studies at the New School.

I love “Best ____” book lists. They remind me of texts I want to read, introduce me to titles I don’t know, and provide good fodder for quibbles! Your recent memoir list checked all three boxes for me. Here is my quibble: Maya Angelou’s powerful memoir, “I Know Why the Caged Bird Sings,” doesn’t make the top 50 published in the last 50 years? It came out in 1969, before the “modern memoir boom,” as you put it, but I suspect it was a portal for many readers into the world of literary memoir. Certainly it has occupied a valued place in high school English curriculums throughout the country, including my own. The story she told and her life have been an inspiration to countless readers.

I’d like to offer two more that were so stark and out of my world experience that they remain in my mind: “Don’t Let’s Go to the Dogs Tonight,” by Alexandra Fuller, and “I Should Have Died,” by Philip Deane. Two more that are over the 50-year line but are worth keeping in print are “Hons and Rebels,” by Jessica Mitford, and “Journey Into the Whirlwind,” by Eugenia Ginzburg.

How about adding “Heartland,” by Sarah Smarsh, “Lab Girl,” by Hope Jahren, and “Educated,” by Tara Westover?

Pleased as punch to see “Conundrum” and “Fun Home” on there. Wish Roz Chast’s “Can’t We Talk About Something More Pleasant?” had made the cut.

Two favorite memoirs that would’ve made my Top 10 list, let alone Top 50, are “After Long Silence,” by Helen Fremont, and “The Speckled People,” by Hugo Hamilton.

“Hitch-22”? “Palimpsest”? “A Tale of Love and Darkness”? A list after my own heart. (And the list reminds me that I still need to read Martin Amis’s “Experience.”)

I’m so heartened by how few celeb memoirs are on this list. Richards’s “Life” is a worthy exception.

This is a great list, but I would’ve also included Richard Rodriguez’s “Hunger of Memory” and Caroline Knapp’s “Drinking: A Love Story.”

The Times welcomes letters from readers. Letters for publication should include the writer’s name, address and telephone number.

The Times welcomes letters from readers. Letters for publication should include the writer’s name, address and telephone number. Letters should be addressed to The Editor, The New York Times Book Review, 620 Eighth Avenue, New York, N.Y. 10018. The email address is [email protected] Letters may be edited for length and clarity. We regret that because of the large volume of mail received, we are unable to acknowledge or to return unpublished letters.

When the Urge to Write Is a Life Sentence

Revisiting ‘The Tiger’s Wife’ and the Balkan Wars