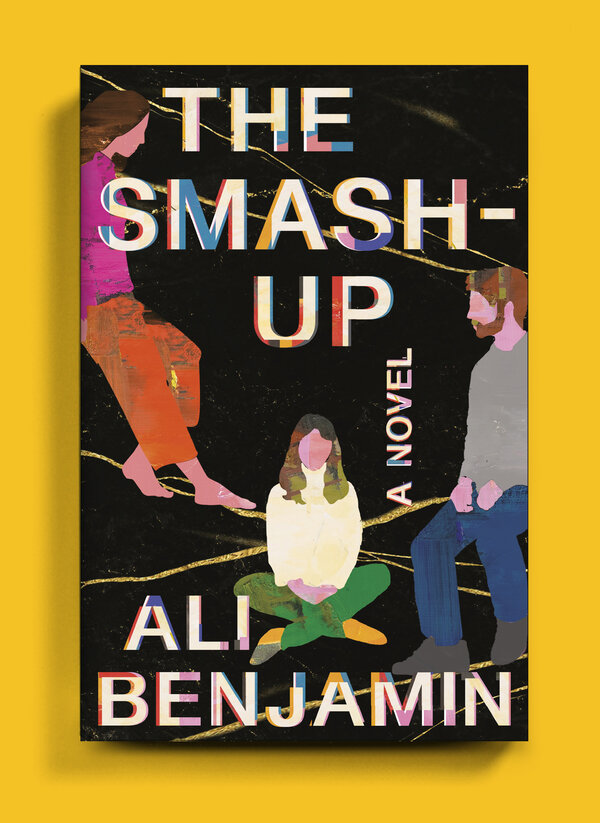 Welcome to Group Text, a monthly column for readers and book clubs about the novels, memoirs and story collections that make you want to talk, ask questions and dwell in another world for a little bit longer.

The ripple effect of the #MeToo movement hits small-town Massachusetts — and one family in particular — leading to community unrest, marital discord and a painful reckoning about decades-old decisions that haven’t aged well.

Benjamin’s take on midlife marriage and friendship forged by fury is hilarious and uncomfortably close to home. There are no heroes here; I got whiplash trying to figure out who I trusted and what I was rooting for, and the sensation was mesmerizing.

“What happened?” wonders an omniscient narrator in the introduction to THE SMASH-UP (Random House, 352 pp., $27), a cleverly hyperlocal novel that unfolds during Justice Brett Kavanaugh’s Senate confirmation hearings in September 2018. “There are no closed-off spaces, it turns out. The rupturing, the quake, could be felt in every floorboard, in every home. There wasn’t a window anywhere that hadn’t been rattled. Even here, even in this quiet nowhere, what happened had fractured even the quietest of lives.”

Ali Benjamin’s “quiet nowhere” is Starkfield, Mass., a fictional town in the Berkshires boasting “a nondescript village green, around which are scattered a handful of small businesses, no more than one of every variety.” You may remember the place from “Ethan Frome.” And the lives we see fracturing — shattering, really — belong to a modern-day Frome family: Ethan, the semiretired co-founder of a media start-up whose former partner’s predatory antics have come back to haunt him; Zenobia (“Zo”), a struggling filmmaker preoccupied by her local activist group, All Them Witches; and Alex, their 11-year-old, “Wicked”-obsessed, impulse-challenged daughter who attends the unbearably woke Rainbow Seed School. The three of them live with a boarder/babysitter named Maddy and their aging dog, Hypatia, in a half-restored house crammed with soon-to-be-returned furniture the family can’t afford.

There’s some heavy-handedness happening here: the Whartonian names, the witchiness, the crumbling edifice as stand-in for a world gone mad. I took notice and moved on. Benjamin is like an overly chatty but skilled magician; she earns herself a few twee flourishes by telling a modern and energetic story about a marriage on the skids.

For Ethan and Zo, the 2016 election is “the break between before and after, then and now.” He was a checks and balances guy — “It would be OK, he was certain. This was America” — but Zo would hear none of it. Bereft by the outcome, she marches, makes posters and organizes. Twice a week, she meets with her women’s group (“half of them wearing pink hats, all wearing their wrath like suits of armor”). In one uncomfortable bedtime scene, Ethan proposes a new title for his wife: Minister of Rage.

The story of the couple’s drift and, ultimately, their rift comes to us by way of Ethan, who is both nostalgic for their high-octane early years together in New York and burdened by his domestic responsibilities in the cozy hamlet they chose for its slower pace. Now, while Zo is rocking out in the living room with her compatriots — the vibe is “a cross between the Irish Republican Army and the Charlie Brown dance scene” — he’s the one who makes sure Alex gets to bed on time. (The imposition!) Maddy, unencumbered by the baggage or history of a long relationship, is the only one who is sympathetic to Ethan’s plight.

Instead of steering us into an affair, Benjamin sets up an intricate obstacle course. Ethan has to figure out how or whether to extricate his ex-business partner from a mess of his own creation. Zo needs to navigate the next phase of her career, as well as the loathsome power parents who want to oust Alex from the carefully curated, artisanal fifth grade. It’s impossible not to sympathize with Zo, to want more of her, and yet she remains out of reach, unaware that her own husband may be one of the very men she is railing against. We even come to feel sort of sorry for the well-intentioned but misguided Ethan, who just wants to connect with his wife.

What’s at stake is the state of the Fromes’ union, but neither of them stops to consider this until they’ve both lost sight of their destination: the supportive, creative and thoughtful idyll they hoped to build together. Instead, the two change lanes so many times, they’re not even on the same highway. Their gazes flick to the rearview and then the side view, where objects really are closer than they appear (and not just Maddy) — until, in a brutal, gut-wrenching moment, when it might already be too late, Ethan and Zo finally turn their attention to the smudged windshield that is their future together. Will they merge or exit? Do they have a choice?

Were you on a particular side? If so, why? And when you arrived at the, shall we say, “hairpin turn,” what were your thoughts?

Benjamin is known for novels for younger readers, including “The Thing About Jellyfish” and “The Next Great Paulie Fink.” How did she bring her kid’s-eye view to “The Smash-Up”?

“Impersonation,” by Heidi Pitlor. Welcome to another run-down corner of the Berkshires. This is a similarly wry view of characters struggling with a boiled-down version of issues in the headlines — in this case, a slow slide into poverty, the challenges of finding affordable child care and the reality of being a woman who “has it all.”

“Behold the Dreamers,” by Imbolo Mbue. In her debut novel, Mbue tells the story of a Cameroonian couple who are building a new life in New York City when their jobs are upended by the 2008 financial crisis. We see the collapse of Lehman Brothers through the eyes of an executive’s chauffeur and the unfortunate domino effect of choices made by a wealthy few.

My Crazy World by Christy Dignam: A vivid account of excess and survival from one of rock’s invincible spirits The top creator economy moves of the week, from new co-owners at 100 Thieves to a $4 billion valuation for Patreon