There is nothing like being whisked away to a well-constructed and immersive fantasy world, and that’s just what Orphans of the Tide does from the opening page. Penguin debut children’s novelist Struan Murray has penned an absolute corker, one that’s already set to be at least a trilogy of tales. Set in the last city of a drowned world, the book opens with a dead whale washing in with the tide, only for a mysterious boy to be found alive in his innards.

The City’s religious authorities believe his body to house The Enemy, the god responsible for putting the world its watery grave.

However, protagonist Ellie, a young inventor, reckons he’s innocent, sparking a thrilling adventure to find out the truth.

Orphans of the Tide’s world could somewhat be compared to that of London in Philip Reeve’s Mortal Engines.

The City is wonderfully descriptive; rustic, salty and at times verging on a seaside steampunk aesthetic. 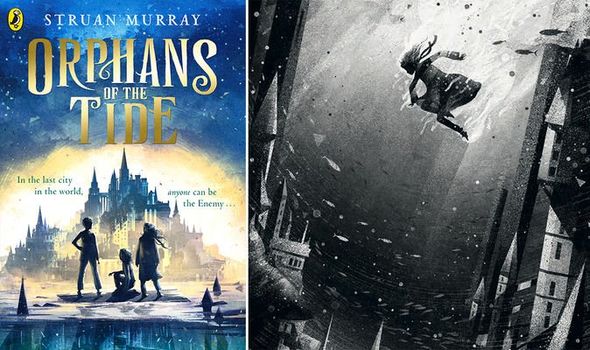 It has an aspect of medieval superstition with the Inquisition ruling with an iron fist, as the people revel at the opportunity of another public execution.

While simultaneously being slightly Victorian in its style, as Whale Lords wander cobbled streets full of Jules Vernian contraptions for catching sea life.

None more so than in Ellie’s cluttered and eclectic workshop, where the reader gets to enjoy seeing her grow in friendship with the boy, who she calls Seth, and their fellow orphan Anna.

This trio of heroes is wonderfully relatable, likeable and endearingly flawed just like the rest of us.

But they’re not without their challenges found in both mortal and god.

The gruff, imposing Hargrath is determined to have Seth burned at the stake, believing him to be The Enemy’s Vessel.

After all, this tenacious Inquisitor has his arm wrenched off by the demonic god itself.

Yet Seth doesn’t know who he is or why he was in the whale; sparking a mystery full of shock twists and turns.

Secrets are dispelled throughout the novel which makes you think and rethink if you really know who these characters really are.

There are even intriguing diary entries from the last person to be The Enemy’s Vessel, that pop up in-between chapters as a welcome puzzle to solve.

Yet this isn’t a slow-moving mystery, but one filled with swashbuckling adventure and an exploration into the world’s ancient mythos discovered in its partially drowned gothic towers.

Being such a well-created piece of fiction, it would not be surprising at all if Orphans of the Tide were to be picked up for a TV show or movie anytime soon.

Certainly, Japanese animation house Studio Ghibli would be a perfect fit for this story.

An enthralling fantasy that moves through dark and grisly scenes of grave peril to positively touching moments of profound friendship.

An incredibly imaginative narrative that fills its reader with wonder and thrills while also not being afraid to share quieter moments of real heart.

Orphans of the Tide is out now.

Readers Add to the List of Best Memoirs Since 1969

Fareed Zakaria Looks at Life After the Pandemic