People who met the British novelist and philosopher Iris Murdoch (1919-1999) tended to want to describe her. She had big, round blue eyes, strawlike hair and a broad face with high cheekbones. She resembled a lioness or, in one observer’s view, the actress Falconetti in the 1928 silent “The Passion of Joan of Arc.”

The intensity of Murdoch’s gaze, boring into you from the dust jackets of her many novels, seemed a promise of the books’ contents. For decades this remarkable writer delivered prickly, sophisticated and somewhat unearthly fiction about good and evil and sex and morality. She trailed a large, large muse. She deftly moved her ideas about, positioning them like the slabs used to build Stonehenge.

This year is the centennial of Murdoch’s birth. It’s also been 20 years since her death at age 79. Distressingly, her posthumous reputation is in semi-shambles.

Many of her novels are out of print. Young people tend not to have read her. She is seldom taught.

Well-thumbed Penguin paperback editions of Murdoch’s novels, foxed and sun-damaged, were once staples of Goodwill stores and other secondhand bookshops. These have largely disappeared, in my experience, from circulation. It’s hard to argue with the British writer D.J. Taylor’s contention, in The Guardian in 2014, that “shares in Iris Murdoch are in freefall.”

How did it come to this? In part, it may be that Murdoch was too prolific. Less might have been more. A few of her novels, if not outright duds, are dud-like. The intellectuals and artists and eccentrics in her lesser books seem to be moved like lethargic wooden chess pieces, making you feel like you’re trapped in the lower intestine of some baroque scholarly superstructure.

In part, too, it may be that Murdoch is supremely hard to pin down in nearly every regard. There is her ardent and complicated sexuality, for example. She had many liaisons with both men and women throughout her life, even during her long and happy marriage to the shambling and abstracted English literary critic and writer John Bayley.

(Bayley, who tolerated her affairs, wrote three memoirs about his life with Murdoch. This was two too many. One became, in 2001, the movie “Iris,” starring Kate Winslet and Judi Dench as the young and older Murdoch, respectively. The poster’s tagline declared: “Her greatest talent was for life.”)

Murdoch was a staunch feminist, and a pioneer in putting complex and believable gay and lesbian characters into novels. But she also wrote six novels from the point of view of male characters (these are, in fact, some of her very best) and none from a woman’s first-person perspective. Nothing about her was ever simple.

Murdoch’s dwindling reputation is painful to behold. To allow her name to fade from the list of the most elite writers in English of the second half of the 20th century is to begin to take our bearings from the wrong landmarks. To borrow a line from Peter J. Conradi, her biographer, “She colonized the century and gave it back to us as myth.”

She was the rare kind of great, buoyant, confident writer who could drive the whole machine. She was as in touch with animal instincts as intellectual ones. The scope of her vision makes you feel, when you are close to her fiction, that you have glimpsed the sublime — that you have swum very near to a whale.

“All speech is seduction,” Murdoch once wrote, and she seduced on many levels at once. Her novels have a tidal pull. They’re so often about extreme love that if I had to choose a paradigmatic sentence from her work, it might be this one from her piquant and often farcical novel “A Severed Head” (1961): “I would come to her even if I had to wade through blood.”

There is no sense in being a reader (or a critic) if you don’t go where your pleasure takes you. So allow me to speak about my favorite Murdoch novel — alongside perhaps “A Severed Head,” “The Black Prince” and “The Bell”: “The Sea, The Sea,” from 1978. 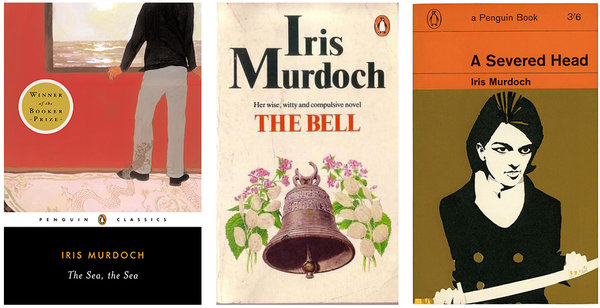 The novel, which won the Booker Prize, is about a widely-known theater director, Charles Arrowby, a kind of Mike Nichols character, who retires from London and moves to an isolated house by a rocky sea. He intends to hole up and write his memoirs. Instead his past — his sexual past, primarily — catches up to him in darkly comic ways.

“The Sea, The Sea” is profound and delicious for many reasons. For one thing, it is a multilayered working out of her feelings about the intensity of romantic experience. “Extreme love must bring terror with it,” she writes. Also: “You die at heart from a withdrawal of love.”

“The Sea, The Sea” also happens to be intelligently and sympathetically concerned with four of my favorite things: swimming, eating, drinking and talking, not necessarily in that order. It is an ideal beach book — especially if you enjoy the cooler and pebblier and spookier northern sort of beach.

Arrowby is hunger-obsessed (“Of course reading and thinking are important but, my God, food is important too”) but in an unusual and somewhat dogmatic way. He likes simple food, homely little picnics, and he often resorts to a can opener.

He complains about haute cuisine because it’s expensive and pretentious and a bore, and we all drink so much we barely experience it anyway. What’s more, it “inhibits hospitality, since those who cannot or will not practice it hesitate to invite its devotees for fear of seeming rude or a failure.”

Murdoch drops offbeat little maxims as she goes: “Basil is of course the king of herbs”; “Only a fool despises tomato ketchup”; “Meat is really just an excuse for eating vegetables.”

Not all of Murdoch’s novels are food-minded. My point is that, whatever human topic she is considering, she has a great deal to say that is funny, pointed, dead-on. She fills us to our ears not just with ideas but teeming humanity. “The Sea, The Sea” also contains a lot of commentary about the theater, and about social class.

Charles, the insecure and unreliable narrator of “The Sea, The Sea,” will make nearly any reader squirm. Were he alive today, he would be a candidate for a bug-zapping #MeToo cancellation. He has slept with (and lied to) many women under his professional control, and some of his comments are plainly misogynistic.

Beautiful women, the morning after, tend to look like prostitutes to him. He also remarks, “There is something strange and awful about the distorted open mouths of singers, especially women, the wet white teeth, the moist red interior.” That sentence, with its obvious sexual panic, should probably be sung to “The Vagina Dentata Cantata,” a made-up ditty in Sigrid Nunez’s terrific novel “Naked Sleeper.”

Myth and magic begin to creep into “The Sea, The Sea.” A writhing monster is spotted in the ocean. Things begin to break and go missing from Charles’s house. He sees strange faces in his windows. Ghosts have risen.

The most sinister ghosts and gods and monsters in “The Sea, The Sea” arrive in the form of real people, however — demons Charles has unwittingly invited himself.

Later in her life, Murdoch said that she found her first novel, “Under the Net” (1954), to be immature. I’ve recently reread it, and it holds up just fine.

The night we lost the girls, and everything changed

Was the man who invented the movies murdered by his RIVAL?