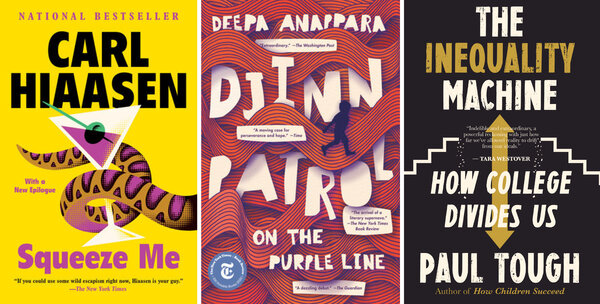 SQUEEZE ME, by Carl Hiaasen. (Black Lizard/Vintage Crime, 384 pp., $16.95.) “If you could use some wild escapism right now, Hiaasen is your guy,” Janet Maslin wrote of this Mar-a-Lago satire whose title refers to both a python that “promptly swallows” one of the president’s socialite friends (“as an amuse-bouche for readers”) and the first lady’s torrid affair with her bodyguard. The paperback edition boasts a new epilogue on the now-deposed president.

DJINN PATROL ON THE PURPLE LINE, by Deepa Anappara. (Random House, 384 pp., $18.) “Rich with easy joy, Anappara’s writing announces the arrival of a literary supernova,” Lorraine Adams declared in her review of this first novel about a boy, “vivid in his humanity,” who looks for children “lost” to their impoverished families along a fictional Indian city’s metro tracks.

THE INEQUALITY MACHINE: How College Divides Us, by Paul Tough. (Mariner, 432 pp., $16.99.) Rather than rectify K-12 inequities, higher education magnifies them, the author argues, in what our reviewer, Tara Westover, called “a powerful reckoning with just how far we’ve allowed reality to drift from our ideals.” The paperback edition has been updated and expanded for the Covid era.

DEATH IN MUD LICK: A Coal Country Fight Against the Drug Companies That Delivered the Opioid Epidemic, by Eric Eyre. (Scribner, 304 pp., $17.) Eyre, in the words of the Times book critic Dwight Garner, “attached himself to this story the way a human fly attaches to a skyscraper.” His Pulitzer Prize-winning “coup,” presented here as “a simmering thriller,” was exposing the exact number of opioid shipments to West Virginia.

MONOGAMY, by Sue Miller. (Harper Perennial, 352 pp., $17.) This “old-fashioned, slow burn of a novel that allows readers to dream deeply,” as our reviewer, Richard Russo, put it, looks back at a 30-year marriage from multiple perspectives after the death of a husband (and father of grown children). It turns on his widow’s anguish that her monogamy — her devotion to “the love of her life” — is the reason “she’s never really found herself.”

SYNTHESIZING GRAVITY: Selected Prose, by Kay Ryan. (Grove, 320 pp., $16.) Our reviewer, David Orr, characterized the Pulitzer Prize-winning poet’s collection of essays, mostly about other poets — Frost, Dickinson, Marianne Moore, Philip Larkin, Stevie Smith — as “a delight, if a tart and idiosyncratic one,” and praised Ryan’s “command of the English sentence” and “electric talent for metaphor.”