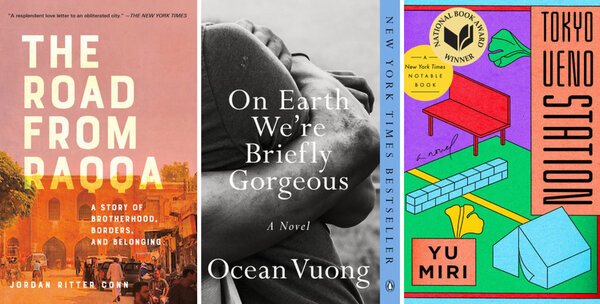 THE ROAD FROM RAQQA: A Story of Brotherhood, Borders, and Belonging, by Jordan Ritter Conn. (Ballantine, 272 pp., $18.) In this riveting account of two grown brothers’ very different journeys out of Syria, Conn “pushes beyond simply humanizing,” Jessica Goudeau wrote in her review. He portrays the United States, where the elder ends up, as also capable of oppression, and finds the two countries’ histories to be “as interconnected as the brothers’ own.”

ON EARTH WE’RE BRIEFLY GORGEOUS, by Ocean Vuong. (Penguin, 256 pp., $17.) Structured as a letter from a queer Vietnamese American son to his mother, who cannot read, this “experimental, highly poetic” novel is, in our reviewer Justin Torres’s words, “brilliant in the way it pays attention not to what our thoughts make us feel, but to what our feelings make us think.”

TOKYO UENO STATION, by Yu Miri. Translated by Morgan Giles. (Riverhead, 192 pp., $16.) Narrated by the ghost of a construction worker from Fukushima who spent his last years in a camp of homeless people in Tokyo’s Ueno Park, Yu’s “glorious modernist novel,” as our reviewer, Abhrajyoti Chakraborty, called it, weaves together overheard conversations, loudspeaker announcements and regretful memories of an ill-spent life. Giles received a National Book Award for her translation.

LOVE AND THEFT, by Stan Parish. (Anchor, 272 pp., $16.) “A kaleidoscopic set piece worthy of a James Bond movie as directed by Robert Altman” is how our reviewer, Adam Sternbergh, described this thriller’s opening, in which four motorcyclists attempt a jewel heist at a Las Vegas boutique. He also lauded the artfulness of the book’s writing.

THE SIRENS OF MARS: Searching for Life on Another World, by Sarah Stewart Johnson. (Crown, 304 pp., $17.) “Johnson’s prose swirls with lyrical wonder, as varied and multihued as the apricot deserts, butterscotch skies and blue sunsets of Mars,” Anthony Doerr declared in his review of the Georgetown planetary scientist’s memoir — in which we see her tending to a Mars rover millions of kilometers away one minute and picking her kids up from preschool the next.

THE ABSTAINER, by Ian McGuire. (Random House, 320 pp., $17.) “I was thinking of ‘Hard Times’ as I read, and ‘A Tale of Two Cities,’ other great yarns dropped into the middle of big history,” our reviewer, Roddy Doyle, remarked of McGuire’s third novel, set in Manchester, England, in 1867, about a teetotaling Irish cop in dogged pursuit of an Irish rebel.

The Oxford Book of Theatrical Anecdotes: Gyles Brandreth’s cracker of a book