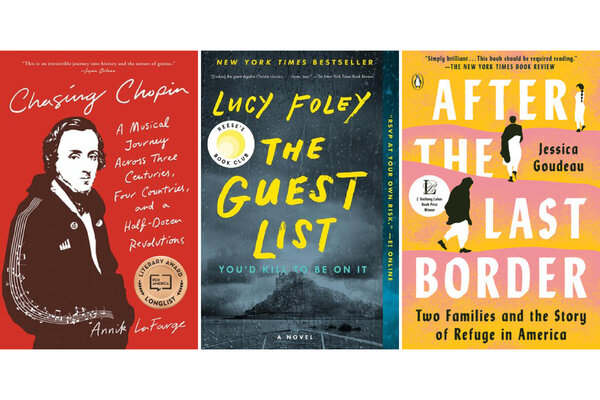 CHASING CHOPIN: A Musical Journey Across Three Centuries, Four Countries, and a Half-Dozen Revolutions, by Annik LaFarge. (Simon & Schuster, 240 pp., $17.) With the “Funeral March” at its center, LaFarge’s multifaceted “journey” covers everything from the tubercular composer’s relationship with the gender-bending author George Sand to the video game “Frederic: The Resurrection of Music.” “For a book about death,” Jeremy Denk wrote in his review, “it’s bursting with life.”

AFROPESSIMISM, by Frank B. Wilderson III. (Liveright, 368 pp., $18.95.) The suffering of Black people “can’t be reconciled with the suffering of other people,” is how Wilderson explains his quasi-memoir’s thesis. A Black person “does not need to transgress to experience the violence of lynchings, of slavery, of incarceration.”

THE GUEST LIST, by Lucy Foley. (Morrow, 336 pp., $16.99.) “Is it really a good idea to have a wedding on a possibly haunted island full of ancient bodies buried in the peat, especially with a major storm brewing?” Set in Ireland, this “clever, taut” whodunit, as our reviewer, Sarah Lyall, described it, evokes Agatha Christie classics.

AFTER THE LAST BORDER: Two Families and the Story of Refuge in America, by Jessica Goudeau. (Penguin, 368 pp., $18.) This book, which our reviewer, Mimi Swartz, called “simply brilliant, both in its granular storytelling and its enormous compassion,” follows the very different experiences of two women who immigrated nine years apart to Austin, Texas, where Goudeau has spent years working with refugees. One came from Myanmar, after spending most of her life in a Thai camp, the other from Syria.

IMPERSONATION, by Heidi Pitlor. (Algonquin, 352 pp., $16.95.) “Pitlor’s voice is witty and brisk,” our reviewer, Elisabeth Egan, noted, “bringing warmth and light to questions of identity, independence and, yes, intellectual property” in this novel about a struggling single mom hired to rewrite the memoir of a powerhouse lawyer who may or may not run for office.

V2, by Robert Harris. (Vintage, 336 pp., $17.) The story of the V-2 rocket furnishes the backdrop to another swiftly paced World War II thriller from the author of “Enigma,” “Munich” and “Fatherland.” In the words of our reviewer, Ben Macintyre, “No novelist is better at evoking the gray resilience of wartime Britain, the moral confusion as the Third Reich staggered toward collapse and the aroma of a bacon sandwich served in a steamy army canteen.”

10 best-selling romance novels on Amazon in 2021

Dr Who, anorexia and a tough act to follow